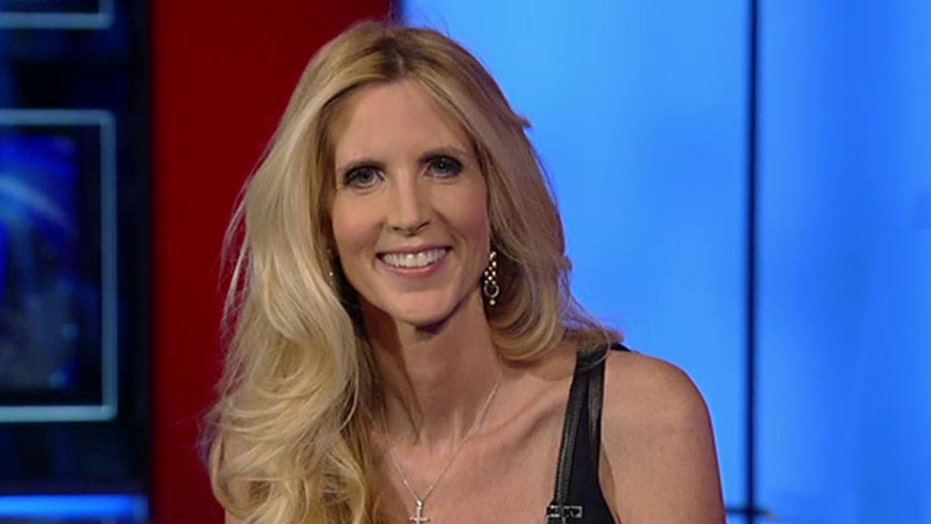 This is a rush transcript from "Hannity," October 29, 2014. This copy may not be in its final form and may be updated.

SEAN HANNITY, HOST: Welcome back to "Hannity." So we are less than one week away from the midterm elections. Liberals are now officially in full-out panic mode. In North Carolina, Democrats are pulling out all the stops. Now they're using despicable race-baiting tactics in the hopes of defeating Republican Senate candidate Thom Tillis. Take a listen to this radio ad.

UNIDENTIFIED FEMALE: Tillis won't fight for us. Instead, he made it harder for communities of color to vote by restricting early voting and voter registration. Tillis even led the effort to pass the type of "stand your ground" laws that caused the shooting death of Trayvon Martin.

HANNITY: And if things -- if possible, things have gotten uglier in Texas, where Wendy Davis and her supporters continue to attack Republican Greg Abbott for having a disability. Watch this.

UNIDENTIFIED FEMALE: Then we have this guy who just kind of rolls around, thinking that he can get tort reform for himself, but take it away from everybody else in the state of Texas!

HANNITY: Here with reaction, the always outspoken author, columnist, best-selling author, Ann Coulter. How are you?

ANN COULTER, AUTHOR, COLUMNIST: Fine, thank you. I can't believe we're finally going to have this election! Seems like it's been going on forever!

HANNITY: By the Democrat. Let me -- I'm going to give you the history, and then I want you to go off on this and tell me what you think of it. Listen to this...

COULTER: I wrote a book on the history.

UNIDENTIFIED FEMALE, 2000 NAACP AD: On June 7th, 1998, in Texas, my father was killed. He was beaten, chained and then dragged three miles to his death all because he was black. So when Governor George W. Bush refused to support hate crimes legislation, it was like my father was killed all over again.

FORMER VICE PRESIDENT AL GORE, JULY 16, 2008: They are in favor of affirmative action if you can dunk the basketball or sink a three-point shot! But they're not in favor of it if you merely have the potential to be a leader in your community!

Don't tell me we've got a colorblind society!

FORMER PRESIDENT JIMMY CARTER, SEPT. 16, 2009, NBC: An overwhelming portion of the intensely demonstrated animosity toward President Barack Obama is based on the fact that he is a black man.

UNIDENTIFIED FEMALE, CITIZENS FOR PROGRESS POLITICAL AD, WGMO, JUNE 24: Say no to the racist agenda of Chris McDaniel and his Tea Party.

HANNITY: How would you counter that, every year?

COULTER: Well, Republicans are -- some Republicans are in an excellent position to counter it. It's the Democratic Party, as I wrote in my book, "Mugged" -- I have the whole history of their racial demagoguery.  The Republican Party has been the party of Civil Rights, opposed by Democrats. Lyndon Johnson, of course, opposed the Civil Rights bill that he later claimed credit for, once he was president.

And the Democrats pretended to care about African-Americans for about six seconds, and then, suddenly, Civil Rights became the right of a lesbian to take her date to the high school prom, the right to have an abortion, and now of, course the right of foreigners to move here and take black people's jobs.

That's how Republicans need to hit this now. We're the party that is opposed to guest worker programs taking your jobs. It is well-established that immigration hurts black workers the most. But this -- I mean...

HANNITY: How do you feel about the election now? You got -- well, we have some pretty close races. Republicans have a good chance to pick up the Senate.

COULTER: Well, I wanted to mention one other thing. I'm very happy to see Wendy Davis again because as a regular viewer of MSNBC, I haven't seen her for a while. And it's funny how every election, liberals, the media, will choose their designated candidate, the golden girl. It's always a girl. And instead of reporting the news, they try to make news.  Well, oh, my gosh, it was Wendy Davis -- oh, we heard about her endlessly!  Will Wendy Davis be the next governor of Texas? She's kind of faded from the other networks, hasn't she.

COULTER: No, I know. That's why we shouldn't waste time on her. We need to talk about, for example, Joni...

COULTER: Are you going to play that tape? I'm dying to talk about this!

HANNITY: Let me roll the tape -- Joni Ernst. This has gone viral.  And we'll explain in a minute.

JONI ERNST, R-IOWA SENATE CANDIDATE: I have a beautiful little Smith & Wesson .9-millimeter, and it goes with me virtually everywhere.  But I do believe in the right to carry. And I believe in the right to defend myself and my family, whether it's from an intruder or whether it's from government, should they decide that my rights are no longer important.

COULTER: OK, now, the crucial thing here is -- and you may have to, if you TIVO'd it, go back and play it again. The media is 100 percent lying about what you just heard Joni Ernst said! She said she supports having a guns to protect herself and her family from intruders or from a government that wants to take away my rights.

No! She is obviously talking about the possibility of some future tyrannical government! And liberals can ask themselves, you know, what if Todd Akin were czar and he came to take your birth control, liberals!  Don't you think you'd have a right to shoot them? She is -- or perhaps a foreign government, I might add.

But the difference between a government trying to take away my rights and the government is enormous! And I'll give you an example of it. You know, I defended Chris Matthews when he talked about how he thinks of the president, or he said a president, when he makes love to his wife.  Everyone thought he said the president, but I said, No, he said a president.. It's like thinking of baseball. See, "the" and "a" makes a huge difference in a case like that!

HANNITY: You -- I only have a minute left. I want to ask you this.  You want conservatives, even if they don't like Republican conservative, to vote. Why?

COULTER: We are never going to repeal ObamaCare. Forget (ph) taking the Senate. We have to take the Senate. We need to get at least 53 seats. I would like to get a few more. We have a tough election...

HANNITY: So even if you disagree with them.

COULTER: ... two years from now -- you have to vote Republican! We will never -- and, oh, my gosh, to think that we wasted money and time in Kansas and Kentucky. And luckily, Liz Cheney, I might add, did not run.  We are not worried about Wyoming tonight.

This is no time -- you just have to rack up the numbers! And even for someone -- look, I understand -- I do a lot of speeches and so on in North Carolina, and Thom Tillis would be in a better position to attack this if he had not supported the guest worker programs. But lookit, North Carolinians, even if you want to run Greg Brannon (ph) again, you're going to have a better chance of taking out a one-term senator if Tillis does not follow through on his promises now. He's great on immigration now.

HANNITY: All right, I got to break. Ann Coulter, good to see you.  Thank you.