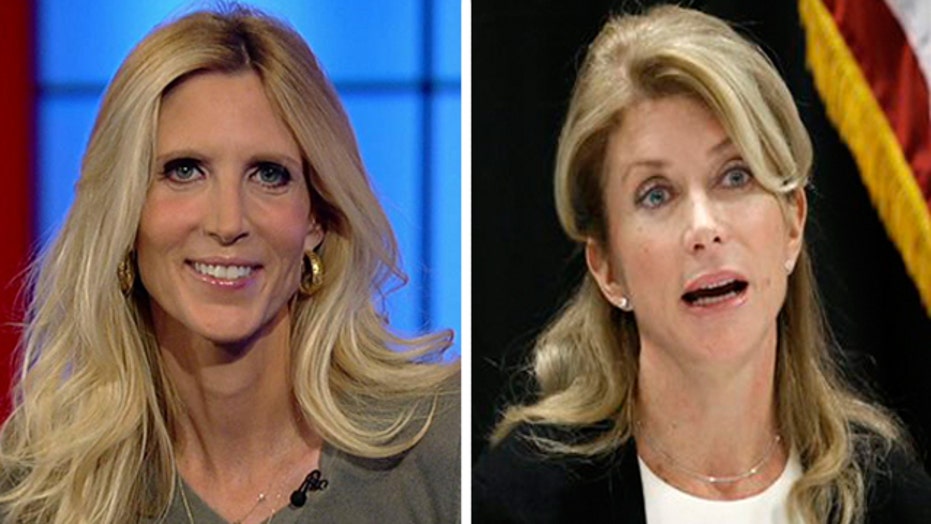 This is a rush transcript from "Hannity," January 21, 2014. This copy may not be in its final form and may be updated.

SEAN HANNITY, HOST: Joining me now, bestselling author of "Never Trust a Liberal over Three" Ann Coulter is here. How are you?

HANNITY: We talk a lot about Cuomo. New York in the last Census lost 3.4 million residents, most of them to Florida, Texas, and the Carolinas. New Jersey lost $70 billion during a five year period from, people leaving New Jersey, high-tax states.

And you know I travel a lot for speeches and it's very striking going to someplace, the booming states, South Carolina, North Carolina, they're booming. There are flowers everyplace. The highways are beautiful. Everyone is wearing nice clothes. You go to beautiful states that were beautiful home states, Michigan and upstate New York, my home state of Connecticut.

COULTER: It's all become like Pottersville from "It's a Wonderful Life." It's very sad.

HANNITY: Detroit, literally I wanted to cry, it was so bad.

COULTER: Yes. It's a gorgeous -- you know there used to be more millionaires in Detroit than New York City? That was the gem of the United States, and that is what Democrats do to it.

COULTER: My favorite story of the week.

HANNITY: She was the one that staged the filibuster against abortion restrictions, rise to stardom, the Democrats great hope in the lone star state.

HANNITY: Now apparently she's got some contradictions, and The Dallas Morning News is reporting that her made-for-TV life is not all it seems to be. And they're reporting she was 21, not 19 when she was divorced, a single mother, working, two jobs. She met Jeff Davis, a lawyer 13 years older than her, and a lot of other fabrications.

COULTER: I mean this blurring the lines of, oh, I should have been more precise. No. These were lies the same as Elizabeth Warren claiming to have been an Indian. The central focus of her life story, the hard-luck story, which would have been amazing if were true, is that she was raised by a single mother, started working at 14 to support her struggling family. Then she became a single mother herself, lived in a trailer park, and through her pluck and determination ends up in Harvard Law School.

No. She basically came from middle class family. Her father ran a dinner theater. That's not working class. She got married young and had a child young and got divorced at 21. The age between 19 and 21 I don't think makes a big difference, but that isn't the hard-luck story. Through the 50s most women I believe were getting married and having children before they turned 20. But big part is the reason being a single mother, and it would be very impressive if she ended up at Harvard law school I will say, is that single mother --

HANNITY: He was granted parental custody.

COULTER: The connotation is that you were supporting a family and raising your kids. She was neither supporting her family nor raising her kids. She married a sugar daddy whom she asked to meet. He supported her, he raised the kids while she went to Harvard law school. I mean, it said that Dallas Morning News article, it's the greatest quote I've ever seen. He says, I quote, "It's ironic the day after I paid the last" --

HANNITY: He said, "I made the last payment and it was the next day she left."

COULTER: But the crucial part there is, "It's ironic." No. I think the expression you're looking for is it's entirely predictable.

And now as onion is unraveling, more and more is coming out. By the way, this article in the Dallas Morning News was written by Wayne Slater, co-author of "Bush's Brain," an attack book against George Bush. If anything this is a puff piece to allow Wendy Davis to get ahead of the story. She's turning around now and attacking her Republican opponent and -- as the feminists always do. She was caught telling a lie. I'm being attacked because I'm a woman!

HANNITY: I guess she's not the great hope for Texas for the Democrats after all.

We'll do more on this, Coulter. Good to see you.

COULTER: This is all I want to talk about all year.

HANNITY: I can tell.