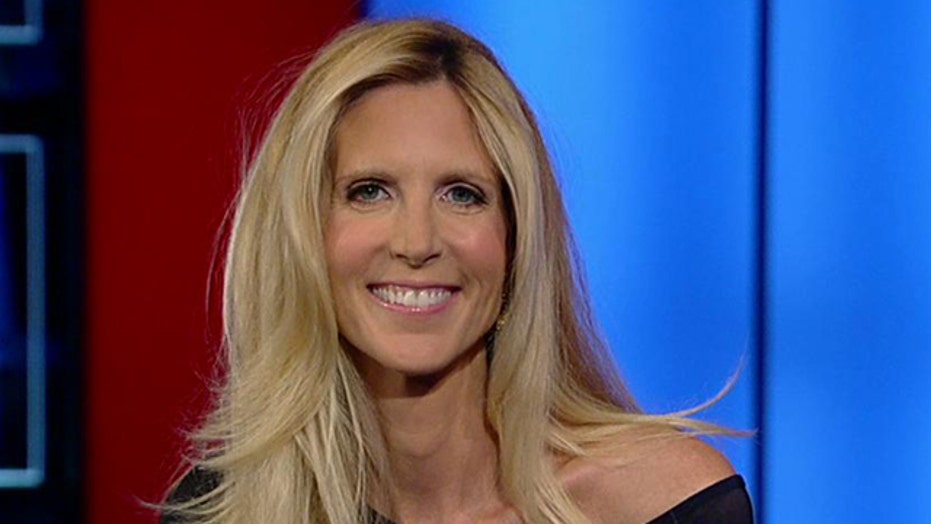 Ann Coulter sounds off about the Donald Sterling scandal

Coulter's take on the NBA controversy

This is a rush transcript from "Hannity," April 29, 2014. This copy may not be in its final form and may be updated.

SEAN HANNITY, HOST: Secretary of State John Kerry came under fire for comments that he made suggesting that Israel could become an apartheid state. During remarks to a group of senior officials and experts from the U.S., Western Europe, Russia, and Japan Kerry had this to say about our closest ally in the Middle East.

SECRETARY OF STATE JOHN KERRY: A unitary state winds up either being an apartheid state with second-class citizens or it ends up a state that destroys the capacity of Israel to be a Jewish state.

HANNITY: Yesterday Kerry tried to walk back his comment, saying in a statement that he wishes he had chosen a different word. I bet he did. But his attempt to backtrack a little too little too late. Calls for his resignation have now begun. Watch this.

SEN. TED CRUZ, R-TEXAS: It is my belief that Secretary Kerry has proven himself unsuitable for the position he holds, and therefore, before any further harm is done to our national security interests and to our critical alliance with the nation of Israel, that John Kerry should offer president Obama his resignation. And the president should accept it.

CHARLES KRAUTHAMMER, SYNDICATED COLUMNIST: I think Cruz is right. This is beyond something requiring an apology. I think this is a resigning type statement.

Another thing, he blamed Israel when during the peace negotiations when they wouldn't recognize Israel's simple right to exist.

No, I mean, obviously the word "apartheid" is to bring up, conjure the idea of South Africa, and it isn't like South Africa. Israel is just trying to be a country, and as part of being a country, one of the things I -- in fact the one thing I admire the most about Israel is their immigration policy. They have 11-foot razor wire walls probably built with U.S. money that we can't use to build on our border. They round up illegal immigrants, put them on planes and buses and send them home.

COULTER: Can you get Chuck Schumer on the show and ask why it's OK Israel to do this but not the U.S.? No one in this country is even proposing the round up portion of this, just when you catch them if you wouldn't mind sending them home. You can't get a job as an illegal. They actually put illegal immigrants, if they manage to get through the razor wire, on planes, sends them home.

HANNITY: By the way, Mexico does the same thing. So I was talking to you on the radio today. You are really animated about the Sterling case and the NBA.

COULTER: I was traveling a lot, doing a lot of packing and unpacking.

HANNITY: You have a boyfriend in L.A.?

COULTER: I knew you would get to that because you missed it on radio.

I was listening to probably 18 hours of this story before I heard the phrase, "his wife." His wife. I flipped around and I said, "Wait, his wife? Did the story change when I walk out of the room?"

No. This guy has been married to the same woman for 50 years. He is an open whoremonger. I'm writing about it this week.

HANNITY: Money for sex, sex for money, which is all on the record.

COULTER: And much more than what you were just citing. I compare to it the Leo Durocher case from 1947. He was the manager of Brooklyn Dodgers. He married a woman, Laraine Day, an actress the day after she got a divorce from her husband. He married her. She was a Mormon. She never smoked or drank. They got married. Through some confusion with the divorce decree the California judge ordered them not to live together for a year in California. He stayed in a hotel, she lived with her mother. Yet and still that was a scandal. He was the manager of the Dodgers. All these Catholic groups pulled out with letters saying we consider him a polygamist because of the divorce decree. They also got a divorce in Mexico. He can't be held up as a moral example.

Look how the world has changed. Meanwhile flash to this piece of crap covered with human skin, Donald Sterling, who is openly consorting with prostitutes, bringing them to his games. The reason the testimony you just mentioned is on the public record is because he sued one of his prostitutes trying to get property back he had put in her name.

HANNITY: Now the wife is trying to get back the property.

HANNITY: I thought it was a girlfriend.

COULTER: He gave her two Bentleys, a Ferrari, a Range Rover. That's a current one. Don't get the prostitutes confused.

HANNITY: Is it a girlfriend or prostitute?

COULTER: The woman a decade ago, openly a prostitute. He in his deposition -- these are his words. The cases you've been citing on the housing discriminations, these are accusations. Maybe they're true, maybe they're not true. There are two important points here. One, look at how the world has changed -- this is not one percent of the outrage against him.

COULTER: First, I haven't practiced law in a decade.

HANNITY: New York is a one party. Out there it's two.

COULTER: I've heard that he -- I don't know, we need to know the facts, I don't know what difference it makes.

HANNITY: It's not to the issue at hand.

COULTER: I've heard he wanted all of his conversations tape recorded because he couldn't remember what he said. I don't know why she would be tape recording them in his room, but that would mean he'd be aware he's being tape recorded.

HANNITY: The NBA knew about it.

COULTER: They certainly knew he was a whore monger. He has the prostitute sitting on one side, his wife on the other.

HANNITY: I thought it was a girlfriend.

COULTER: Current one is being called a girlfriend, and yet she gave him sex and he gave her two Bentleys, a Ferrari, and a Range Rover. I think we're quibbling over the definition.

COULTER: A $1.8 million apartment which the wife is now suing the girlfriend for, which is probably the genesis of this.

HANNITY: Last question. Should the NBA, should NBA owners, three quarters of them are needed to force him to sell the team. I think it's a no brainer. Sell the team. He does not represent --

COULTER: I think they should have done it a decade ago and we wouldn't all be sitting back shocked that this disgusting manatee having sex with everything in sight and bragging about it in the deposition -- do you expect him to have good race relations going? Why are we acting shocked with this piece of crap, point one. Point two -- do not generalize. I am not in the same species with this person.