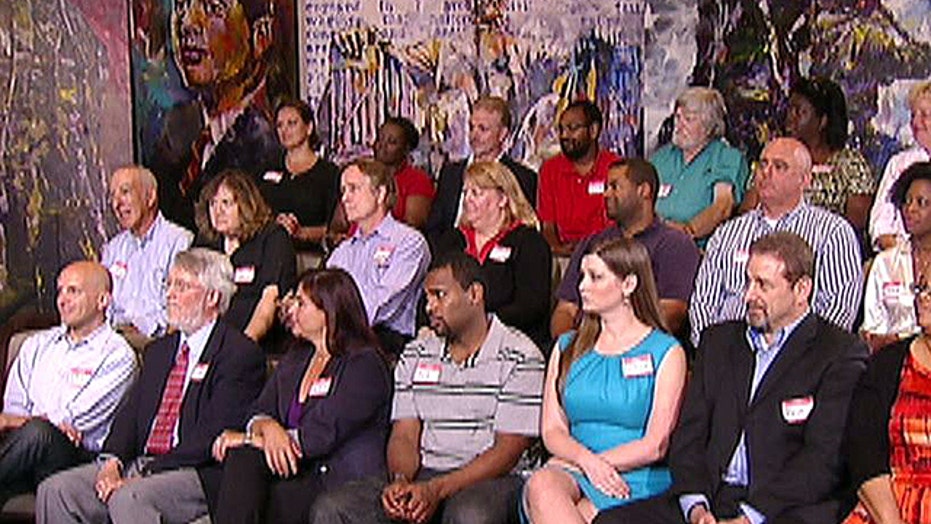 American voters take on the crisis in Syria

This is a rush transcript from "Hannity," September 13, 2013. This copy may not be in its final form and may be updated.

SEAN HANNITY, HOST: And welcome to this special edition of "Hannity."

Now, we have heard a lot of talk over the past few weeks about how the American people do not want the U.S. intervening in Syria. So, tonight for the full hour, we are giving the show up to you, the American people, to hear what the average citizen has to say.

Now, pollster Frank Luntz assembled a bipartisan, focus group to debate the issue in Syria and much, much more. So, let's go out to Washington, D.C. and get right to the group and Frank.

FRANK LUNTZ, POLLSTER: I have been doing testing on world leaders now for about two decades. And then all the time, I don't think I have ever had a score as bad as this. Let's take a look.

PRES. BASHAR AL-ASSAD, SYRIAN PRESIDENT: I haven't finished. Our soldiers in another area were attacked chemically. Our soldiers. They went to the hospital as casualties because of chemical weapons. In the area where they say the government used chemical weapons, we only had video, and we had only pictures and allegations were not there. Our forces, our police, our institutions don't exist. How can you talk about what happened if you don't have evidence?

LUNTZ: Do any of you trust him? Any of you?

LUNTZ: So, what should we do with him?

UNIDENTIFIED MAN: Treat him like the dictator that he is. He's killed hundred thousands of his own people. He got to marginalize him and somehow get a plan to get him out of there.

LUNTZ: Do you want to kill him?

LUNTZ: Who wants to kill him here? Raise your hands if you want to kill him. If you actually want to see him executed?

UNIDENTIFIED MAN: He killed a hundred thousand of his own people. Why should he live?

LUNTZ: Why it should be the U.S.'s decision who lives and who dies?

UNIDENTIFIED WOMAN: Who is re placing him?

CHRISTY: Seriously. Who takes his place? It could be worse.

UNIDENTIFIED WOMAN: We can't trust him.

HOLLY: If he's using chemicals of mass destruction against his own people, I suspect that he's a bit crazy. But if you -- we can't just go annihilate a dictator. And there has to be some sort of a diplomatic approach to it prior to -- diplomatic, and also yes, treating him with dignity and respect. We are never going to get anywhere if we tried to strong arm every dictator.

ALEV: I just don't think that we do have an opportunity for diplomacy in this area of the country with these type people.

UNIDENTIFIED MAN: The problem is though is that, how do you treat somebody with respect when they lie to your face? He sat there, and he talked to the reporter and he said, I can't confirm that we have weapons and, oh, and then just a what? A of couple days ago he says, oh, I'll give them all up.

HOLLY: But I don't understand. If people think he's crazy and a dictator, then why don't we bomb him? Why does everyone disagree with using force?

MICHAEL S.: Right now. We have to worry about the splinter in our eye before we start worrying about the plank in someone else's eye.

MICHAEL S.: We have so many issues right now in this country.

HOLLY: We are always going to have issues.

MICHAEL S.: We are talking about right now taking vengeance. That's not a deal with our military.

HOLLY: It's not about vengeance.

MICHAEL S: It is a moral obligation --

MICHAEL S.: It is a moral obligation when people are alive after the fact that --

HOLLY: This guy cross a line. An extreme line on the world stage.

LUNTZ: To do what?

UNIDENTIFIED MAN: He could have acted --

CHRISTY: To do whatever he wants to do. Demand what he wanted to do. That's what Bush did. Bush when in there and did what he was supposed to whether we agreed or not.

JASON: The problem with Syria is the problem in the rest of the Middle East, there are no better options. We are not better off for having in Iraq. In fact, we destabilized it and made Iran the power in that region. Afghanistan might be better martially better off.

JASON: Let sleeping dogs lie. We need to stay out of it. Because we don't have a better result in what we have.

UNIDENTIFIED WOMAN: It's a revolution. We have to let it play out.

LUNTZ: Let it play out. So, we should not be involved at all?

JULIE: Don't interfere with the revolution. But you have to take the chemical weapons option off the table for Assad.

LUNTZ: And how do you do that if you don't get tough with him?

UNIDENTIFIED MAN: They're saying that we need to have an agreement that we can verify President Obama said it.

HOLLY: If you cannot thrust Assad and he is using chemical weapons, we play on a world stage. The United States is part of a big global conglomerate. We are not alone. We have to act.

PHIL: I mean, killing your own people and gassing them is a war crime. I mean, if we believe that, let's build a real coalition of international partners, and go in and overthrow him.

UNIDENTIFIED WOMAN: I just feel like we are the Lone Ranger. You know, we're out here all by ourselves. There is nobody else coming to aid and assist us.

LUNTZ: Can I ask you a direct question?

LUNTZ: That's one of the reasons why people voted for Barack Obama in 2008 is that he would improve America's standing across the globe. What does it say that this president ,who was elected to re-establish relations, has no global support?

UNIDENTIFIED WOMAN: You know like he's being punked on the world stage right now.

UNIDENTIFIED WOMAN: -- he punked other countries and thinking that there was weapons of mass destruction in Iraq. So, now people are tired of crying wolf. I mean, at this point, we are very war-weary, but something needs to be done.

LUNTZ: That's the point. That is the point. We are trying to figure out -- you watched how Assad responded. We need to wrap up.

JIM: We also know that he's working with Iran, he's destabilizing, trying to destabilize Iraq. And somebody down here earlier said, we don't know if we'll get a democracy if he goes. We don't. But we know if he stays, we'll going to have a dictatorship. And we know he's going to be working against the Americans, in Iraq, in Afghanistan and anywhere else in the Middle East to destabilize.