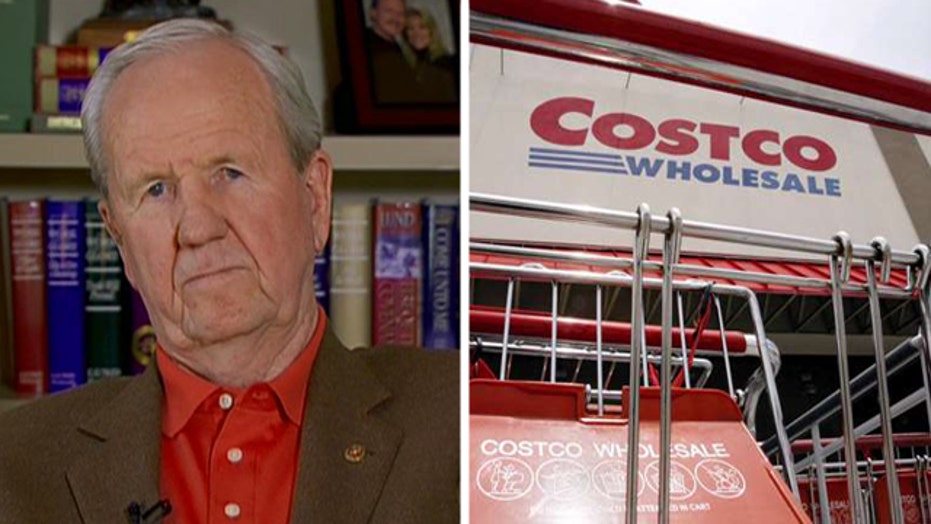 Gerald Molen fires back at Costco for pulling D’Souza book

Warehouse club says it will bring back 'America'

This is a rush transcript from "The Kelly File," July 8, 2014. This copy may not be in its final form and may be updated.

MEGYN KELLY, HOST: Breaking tonight, "The Kelly File" just uncovering new developments on the decision by retail giant Costco to pull all copies of the new book "America" by conservative filmmaker Dinesh D'Souza. His books talks about American exceptionalism, which is also the team of the new movie that D'Souza has just put out by the same name. Costco's CFO tonight saying that the book will go back on store shelves in the next few weeks and denying that it was removed for political reasons.

Joining me now, Gerald Molen, he's an Academy Award-winning producer of movies you may have heard of like "Schindler's List" and he is a producer of Dinesh D'Souza's film "America," which we featured on this program last week.

Gerry, good to see you again. And so, tonight after we reached out to Costco, "The Kelly File," and asked them about these reports, they denied that it was pulled for political purposes. They said the book sales were shoddy, and they said that the reason -- and they said that now in the wake of the controversy, they will be reordering the books. Your take on it.

GERALD MOLEN, CO-PRODUCER, "AMERICA": Well, I just the whole thing kind of strange because it was kind of interesting that they released the book on June 1st and then they pulled the book on July 1st, which just happened to coincide with the release of the film. And it would have been nice if had given it a week or two weeks to see how it did. And we're finding out right now, that it's on track to be a bestseller.

KELLY: It's at the top of Amazon's bestseller list right now. It is number one, an Amazon.com in a moment. But apparently those sales were not convincing to Costco or at least they weren't willing to see how the book did once a huge movie was released by the same title. I mean, do you smell a rat here or what?

MOLEN: Well, yes, it smells a little bit like smoke. I would imagine there's something there, because with the outcry across the country right now, it's amazing that, you know, Costco waited this long to come back and say that they were going to get it out. All I heard all day from every contact I had was that they had pulled the books. And the timing was strange. I didn't like it, and I -- if I was -- kind of strange it happened that way.

KELLY: The movie, the viewers should know, those that haven't seen the films yet or the clips that we played last week is, it takes on the ideas about America that some on the left, in particular the far left have. They don't believe in American exceptionalism. They think that we're a country that's based on theft and all sorts of nefarious actions, and the movie tries to debunk those claims. The former CEO of Costco is a big Democratic donor and a huge Obama donor and donor to President Obama's pac, his super pac that got him reelected. See any connection between those facts?

MOLEN: Well, I see a connection, certainly. But right now they're talking about within two weeks. They're going to have the book back in the stores again, why wait the two weeks. Why not do it right now? Why not show the American people that they mean what they say. I'll be suspect until I see it happen. And even then, I'll always be a little suspect of why they did this in the first place.

KELLY: Uh-hm. You know, Hillary Clinton, her book is still there, which had disappointed sales, but she did still wind up on the bestseller's list. However, let me challenge you with this. Dr. Ben Carson's his book, and he's on the Costco board, but his book stayed in Costco and he's a controversial figure for some in the left as well.

MOLEN: I think it's all cover for them. You're absolutely correct. Costco story yesterday and Hillary Clinton's book is all over the place. And as has been reported around the country, it's not been a successful run for her. So I found it a little bit strange that when I looked around for Dinesh's book that it wasn't there. And this morning, it kind of blew up all over the place that had been pulled.

KELLY: Well, she was also on the New York Times bestseller's list and near the top. But her sales were not that what they expected them to be over at her publishing company.

Gerald Molen, great to see you, good luck with the film.

MOLEN: Thank you so much, Megyn.