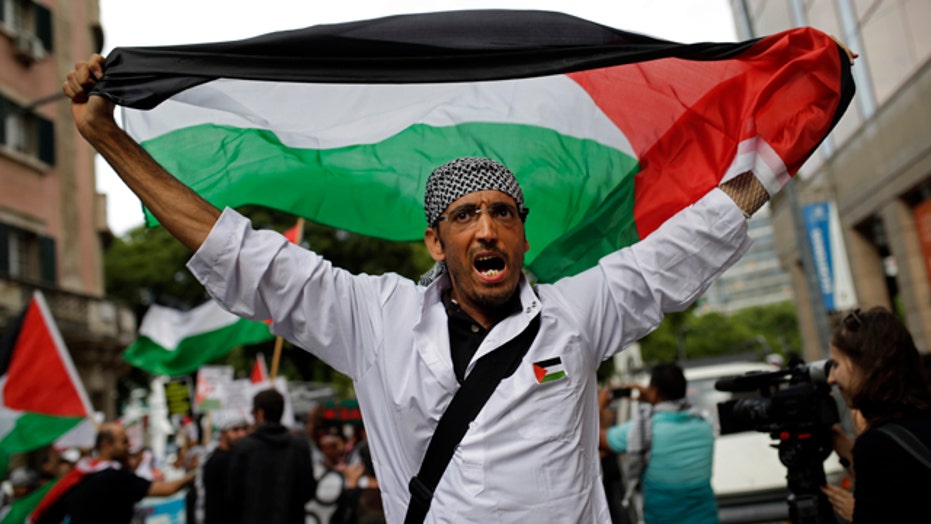 This is a rush transcript from "The Kelly File," August 1, 2014. This copy may not be in its final form and may be updated.

MEGYN KELLY, HOST: Moments ago, I spoke with former Israeli ambassador to the U.S., Michael Oren.

MICHAEL OREN, FORMER ISRAELI AMBASSADOR TO THE U.S.: Good evening, Megyn. Good to be with you. Well listening to a spokesman from Hamas is like listening to a spokesman from Al Qaeda. No great amount of credibility there. The fact of the matter is Hamas violated the cease-fire well after the cease-fire was declared. And then a very senior member of Hamas came out and said that the soldier had been taken hostage. Now, after the world condemned Hamas for violating the cease-fire, Hamas is trying to walk it back and say that the soldier was killed in some type of Israeli bombardment, which is totally absurd.

OREN: Patently false. Israel takes very -- it charts very closely all of its military activities and including enemy military activities, and all these exact time when this happened. It was well after the cease-fire was supposed to have been enforced.

KELLY: Comment if you would on our president's comments today. Because he condemned Hamas for breaking the cease-fire. He defended our secretary of state for at least trying. And defended America's influence, saying unlike other countries at least we try.

We do try, ambassador, we don't always succeed. And I know there have been questions as to whether we should be taking different tactics. What are your thoughts?

OREN: Well, I think that the United States has tried and deserves credit for trying. Some of the ways the United States has tried in the last few weeks has not conformed to the interests of to Israel. Not just Israel. There's been tensions between the Egyptian government and the administration, the Saudi government and the administration, even the Palestinian authority. I think people are generally on a better page today, the same page. There's a general understanding that any cease-fire has to enable Israel to continue to identify and locate the tunnels, destroy the tunnels.

Any cease-fire cannot create a situation in which Hamas can declare victory. And hopefully the cease-fire will be the first step toward the demilitarization of the Gaza Strip. Similar to the way that Syria was deprived of its chemical weapons is a good precedent for this. This is the official position both the Israeli government and the Egyptian government would support it from some unlikely governments including the Saudi government in the gulf.

KELLY: And so, our viewers know this is what Israel wants. They want the rockets to stop firing into their country, they want the tunnels to shut down, which Hamas uses to terrorize Israel. And they want Gaza to be demilitarized because that is the place from which the shelling starts into Israel.

And yet there's a real question tonight, ambassador, about what hopes at all are left for a cease-fire now. That this one which was so difficult to negotiate in the first place, it was a humanitarian cease- fire, was -- appears to have been violated 90 minutes into it by Hamas.

I mean, what incentive at this point does Israel have to believe anything Hamas's political wing has to say? Because the other thing we're hearing tonight is it's Hamas's military wing saying, you know, we don't much care what the political wing agreed to. We didn't agree to that and we're going to do what we want to do.

OREN: They've violated several cease-fires including cease-fires that Hamas itself requested. And they violated their own cease-fire.

The issue is this, cease-fires are not ends in themselves. Cease-fires are -- humanitarian cease-fires will enable people to get food, especially the Palestinian population, to go to the bank. But the idea is that this round of fighting has to put an end to this cycle in which the terrorists get rockets, they fire them at Israeli civilians, they dig tunnels to attack Israeli civilians.

And then when Israel goes to defend itself, we have to fight an enemy like Hamas that hides behind the civilian population, digs under them, fires from inside neighborhoods. Israel's got to fire back to defend itself. Palestinian casualties happen among the civilian population. The world comes down on Israel, slaps a cease-fire down on Israel. And then the terrorists use that cease-fire to get more rockets, bigger rockets and then to fire them again and cause even more damage. This is an opportunity to break that cycle.

KELLY: As you're speaking we're seeing that you know, these pictures of these Palestinian children. And it is terrible. And I know you agree with that.

KELLY: To see children and babies bloodied and injured. And there's a question about -- I know this is a media strategy, I get it, that that is what Hamas does, that they want us to be putting these pictures on the air. This is how they win.

But that doesn't change the fact of it that the children are there and they are hurt. And how long can Israel continue this campaign in the face of these pictures and these facts?

OREN: Well, let me be totally clear about this. These pictures are a tragedy. And that's the pictures, the reality is a tragedy. And the Palestinian casualties in this war like the Israeli casualties in this war are all victims of Hamas. Hamas started the war. Hamas carried out the war. Hamas fired rockets at Israeli civilians from within civilian neighborhoods in the Gaza Strip so that Israel would then retaliate and cause civilian casualties on the Palestinian side. That's how they work. How does it end?

If it ends with a decisive Hamas defeat when Hamas can't replenish its rocket supply, then actually all will be saving Palestinian lives because the next time this happens whether it's in a year or two years, it will be a much bigger war with bigger rockets, long-range rockets. Hamas will be even more dug in and more people will die. It's difficult to internalize that. This suffering is not for not. This suffering will put an end to even greater suffering in the long run.

KELLY: I want to ask you one final question which is how much credibility the American people should be giving to the United Nations. Because the Secretary General Ban Ki-moon has been a bit more measured condemning Hamas where appropriate, calling for Israel to be more careful when it comes to the civilian casualties.

But today we heard from one of the human rights U.N. officials, and that's a dicier group, which is repeatedly condemned Israel over the year and only Israel over the years. And this woman Navi Pillay is now upset not just for the Israel but with the United States for providing money to Israel for its Iron Dome. Let's just play the sound bite so the viewers know why she's so upset with America.

NAVI PILLAY, U.N. HIGH COMMISSIONER FOR HUMAN RIGHTS: Almost $1 billion in providing the Iron Domes to protect Israelis from the rocket attacks. But no such protection has been provided to Gazans against the shelling.

This is the bottom line, Megyn. The bottom line is tonight there are 90,000 Israeli young people, men and women, fighting a desperate battle against a terrorist organization which is viciously racist, genocidal, really no different than ISIS or Al Qaeda. And they're fighting for Israel's home. Israel about -- close to 100 percent of Israelis are behind this action. They want to keep going and they know that we have no choice. And we're fighting a battle not just for Israel. We're fighting a battle for civilization against these sources that want to destroy civilization.

OREN: And we're asking the world, give us a chance to win.

KELLY: Ambassador Michael Oren, thank you so much for your time, sir.