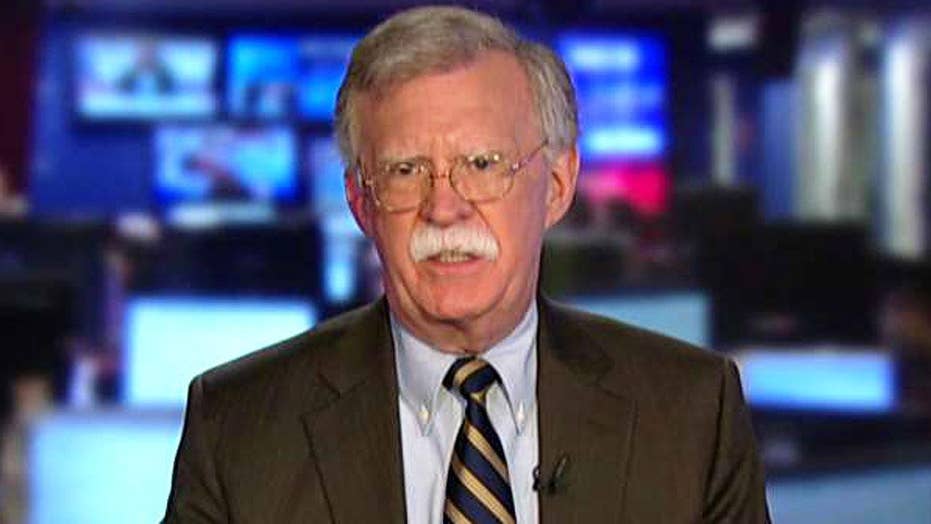 Amb. Bolton: US is in a 'difficult period' with Russia

This is a rush transcript from "Your World," April 12, 2017. This copy may not be in its final form and may be updated.

Secretary of State Tillerson says U.S. relations with Russia have hit a low point. Where do you go from here?

With U.S. -- with us now, former U.S. Ambassador to the United Nations John Bolton.

It is, Mr. Ambassador, a standoff, a low point in relations. So, the question stands, where to from here?

JOHN BOLTON, FORMER UNITED STATES AMBASSADOR TO THE UNITED NATIONS: Well, I don't know there was any indication from the news conference that there is any way forward that they discussed in Moscow today.

The only announcement was to create a working group to deal with what even Secretary Tillerson said were the lesser issues. So, these disagreements, I think, are going to continue, I think, particularly acutely on Syria, but they're going to color a whole range of other issues that affect the broader Middle East.

And that's just the reality. When national interests clash, relations are going to decline. And, sometimes, it's better to understand what is really at work than to try for some artificial redrawing of the terms of the relationship which are not simply sustained by the underlying reality.

We're in a difficult period with Russia.

VARNEY: Now, earlier at that news conference between Tillerson and Sergei Lavrov, Mr. Tillerson said the final outcome does not include a role for Assad in Syria.

VARNEY: Mr. Ambassador, I'm going to hold you up right there.

VARNEY: And back with us now, former U.S. Ambassador to the United Nations John Bolton, who has been listening to that entire event right there.

Mr. Ambassador, two things. The standout sentence to me was from President Trump, where he said the world is a mess. By the time I'm done, it will be a better place. Secondly, referring to NATO members, he said they must pay what they owe.

Sounds like they have not agreed to pay what they owe, right?

BOLTON: Well, to take the first comment first, that is clearly going to require two terms, because I don't think you're going to fix it in four years.

Now, in terms of the spending on NATO, you know, this is something that the Europeans and Canada, all 28 members agreed everybody would spend 2 percent of their gross domestic product on defense matters.

It's not something that we imposed. We didn't put our foot on their necks to get them to agree to it. They agreed to it voluntarily.

And the only thing Trump has said is, why don't you live up to your commitments? I have been through this in earlier administrations, when the commitment was even higher, and the Europeans weren't doing it. Lots of different approaches were tried. All of them failed.

And now Secretary-General Stoltenberg says, spending is coming up, that people, more people are going to meet the 2 percent target. And I think others will as well.

So, I think Trump ought to be given credit for this. When people say they're going to do something, they ought to do it. How hard is that to figure out?

One other question from the floor to President Trump, is it possible that Syrian forces launched the attack in Syria without the Russians knowing? The president replied, it's unlikely, but we're investigating.

BOLTON: Well, I think launching the attack, certainly, the Russians knew about it. They had to. They're right there at the air base. There's no doubt that they had advanced notice.

Launching the attack with chemical weapons, that, I think, is not so clear. Would it be surprise me if the Russians were complicit? Absolutely not.

So I think there's a need for more evidence. I haven't seen, from leaks and other things in the press, anything that convinces me that the Russians were involved before, during or after, but, as I say, it wouldn't surprise me. Let's see more facts.

VARNEY: We were going into this press conference expecting to see our allies fully support the United States and back us up.

That's not exactly full-fledged backing, is it?

Well, the NATO as an organization has taken no position. We haven't, as far as I know, had a vote in the North Atlantic Council. Every statement I have heard, though, from NATO members has been supportive.

But it's another example, I think, our European friends need to be a little bit more sensitive when we go out in front. We're doing their work for them as well. And they talk a lot about how they don't like chemical weapons, but we took the tough step of retaliating for the Syrian government's use of them.

So, I think they could be more appreciative and stand together. We ought to think about how to get them do that. We need to think more about alliance-wide activity around the world. I do think another criticism of NATO is that its decision-making has grown sclerotic over the years. And this would be a good thing to talk about how to improve.

VARNEY: Earlier today, there was a vote in the U.N. Security Council on a draft resolution to condemn Syria for its use of chemical weapons.

The vote failed. One member of the Permanent Security Council, Russia, voted no. The vote therefore failed.

What does this say about the United Nations?

BOLTON: Well, it confirms what we have known for a long time. The Security Council is essentially gridlocked when it comes to really any controversial issue.

The post-Cold War promise that maybe the Security Council could return to what its founders envisioned in 1945 has not come to fruition on anything significant, except in a few rare cases where the United States led the way.

And I think what it says is, if you want to address international problems like terrorism and the proliferation of weapons of mass destruction in a serious way, you have got to do it outside the Security Council.

VARNEY: All right, Mr. Ambassador, thanks very much for joining us on this day. Appreciate it, sir. Thank you.

BOLTON: Glad to do it.