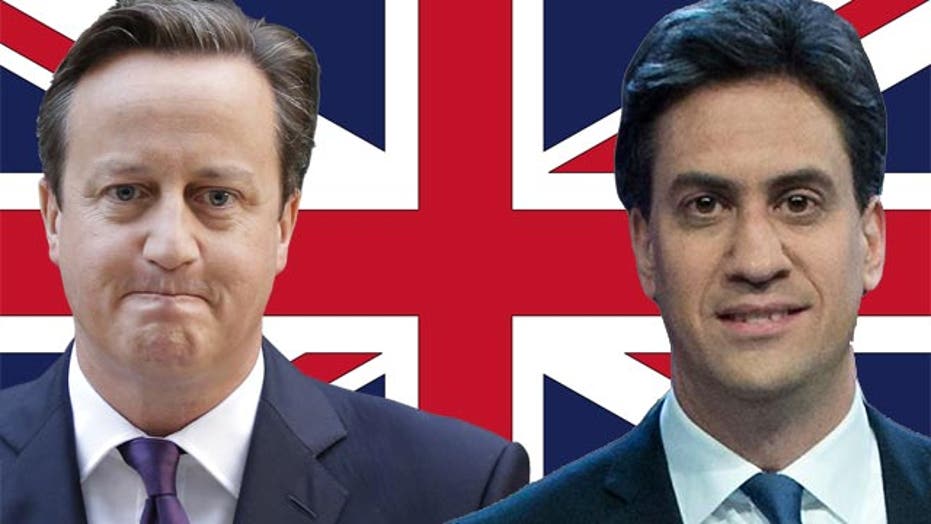 What too-close-to-call British elections mean for US

This is a rush transcript from "Special Report," May 6, 2015. This copy may not be in its final form and may be updated.

ED MILIBAND, BRITISH LABOR PARTY LEADER: This is the clearest choice that is being put before the British people for a generation, between a Tory government who works only for the privileged few or a labored government that will put working families first.

DAVID CAMERON, BRITISH PRIME MINISTER: People really want to think carefully before they cast their vote, but I believe when the crunch comes, when they ask themselves the question, do I trust Ed Miliband with the economy or do I want to stick with a plan and a team that's turning the country around, I think we can do very well on Thursday and cross that line.

BRET BAIER, ANCHOR: A big election across the pond tomorrow as Great Britain heads to the polls. As you take a look at the latest polls there in the U.K., you can see the conservatives and the Labor Party, the Tories and the Labor tied essentially. And, obviously, there is a number of error there. It's not listed on The Guardian poll, but it is very tight as you head to the polls. The importance of this and what it means for our relationship, we're back with the panel. George?

GEORGE WILL, SYNDICATED COLUMNIST: Well, it's not clear that Britain matters that much anymore, but to the extent that it does, this matters a great deal. If Cameron wins, he will be dependent upon, A, a promise he made to have a referendum on continued membership in the European Union. So there could be a terrific jolt to the European Union whether you think the European Union should go on as it is a big question, I doubt.

BAIER: I would just point out that this poll is one poll, and as we saw in the Scottish independence vote, that poll was way off, as it wasn't even close when it came to Election Day. But the importance for us?

A.B. STODDARD, ASSOCIATE EDITOR, THE HILL: Well, George is right. This isn't just that Cameron is facing anti-incumbent sentiment or it's a battle over this conservative- liberal traditional debate over spending the way that Miliband is making it sound. It's actually about that anti-immigration anti-EU sentiment and the idea of whether or not they have a referendum and retreat from the European Union.

For us, they are cutting military spending. They are not really as we face more challenges and crises abroad, they're our traditional ally militarily. They cannot be counted on in the foreseeable future under Miliband or Cameron to provide the same robust assistance that they have.  And in terms of trade, we will see if the Brits are going to leave the EU. It's going to rock the boat.

BAIER: Let's turn now to Israel. Just before the deadline, Benjamin Netanyahu managed to form a government, but with the slimmest of majorities in the parliament there. Charles, big deal? What does it mean?

CHARLES KRAUTHAMMER, SYNDICATED COLUMNIST: It's a big deal for the Israelis. This is really bad.  They will have an extremely unstable government when you have 61 votes and you need 60 to stay you in power. That means if two people from any of these minor coalition parties wakes up on the wrong side of the bed, you could have a government overthrown, or, even worse, they can use blackmail against the government if you don't do X, Y, and Z, we are going to leave.

Second, it is a revival for the ultra-religious who had been boxed out over the last five years and there was a forced reform of all the favors that the religious have been given. They are now back in the coalition and they are now back where they were years ago. So that reform is dead.

And lastly, I think what Bibi is going to have to do, I think what he wants to do now is a grand coalition with Labor, with the Zionist Union.

KRAUTHAMMER: That could be his only chance for any stability. But the reason he did the narrow coalition today is because the deadline was running out, so now he can do a new coalition as prime minister.

BAIER: But, quickly, when the sources close to the prime minister's office tell us that big things get done even in the slimmest majorities, you call that spin?

KRAUTHAMMER: That is -- it's Clintonian.

WILL: Except the Affordable Care Act was passed with every senator having the right to and the power to extort from Obama the "Cornhusker Kickback," the "Louisiana Purchase," and the Gator-aid, as I recall.

KRAUTHAMMER: But you can't repeal it with a single revote. That's the problem.

BAIER: We will watch that closely and have a story about that and the elections in Britain tomorrow.

That's it for the panel. But stay tuned to see what you may have missed from Hillary Clinton's Las Vegas visit.