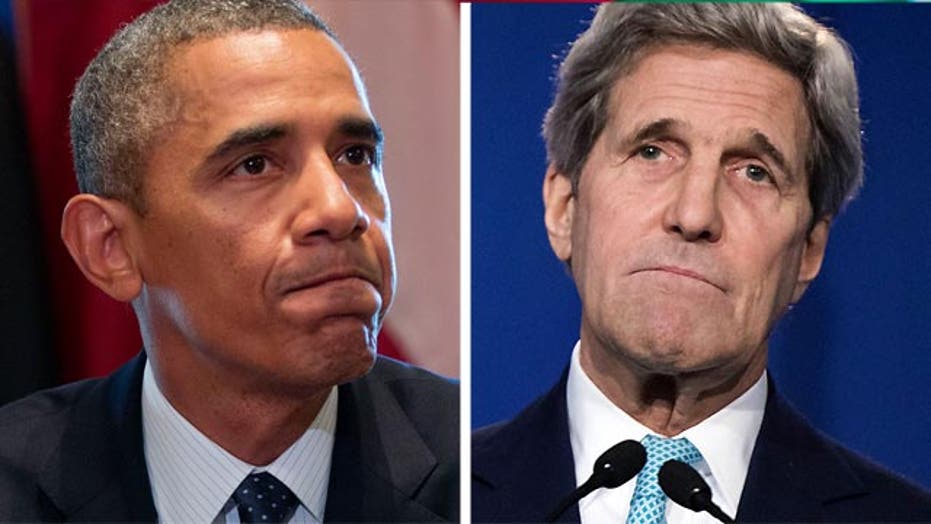 This is a rush transcript from "Special Report," April 21, 2015. This copy may not be in its final form and may be updated.

ISRAELI PRIME MINISTER BENJAMIN NETANYAHU: But it's only a few months, possibly a few weeks before they get enough enriched uranium for the first bomb.

PRESIDENT BARACK OBAMA: We think that it would take over a year or so for Iran to actually develop a nuclear weapon. Our assessment continues to be a year or more away.

And in fact, actually, our estimate is probably more conservative than the estimates of Israeli intelligence.

Today, estimates indicate that Iran is only two or three months away from potentially acquiring the raw materials that could be used for a single nuclear bomb. Under this deal, Iran has agreed that it will not stockpile the materials needed to build a weapon.

BRET BAIER, ANCHOR: Well, the intelligence community put out this assessment for the public that Iran is two to three months away from getting a nuclear bomb, April 1.However, reporting by Eli Lake and Bloomberg, quote, "When asked how long the administration has held this assessment, Energy Secretary Moniz said, quote, 'Oh, quite some time. They are now -- they are right now spinning, I mean, enriched -- enriching with 9,400 centrifuges out of the roughly 19,000 plus all the R&D work.

If you put that together, it's very, very little time to go forward.  That's the two to three months. '" In fact, they've held this assessment for quite some time, not publicly but privately.

CHARLES KRAUTHAMMER, SYDNICATED COLUMNIST: Well, look, the -- the only explanation -- the best explanation surely is they were deliberately deceiving the American people and the Congress, of course, because they knew that they were only a few months away and pretended otherwise. Why?

They were pretending otherwise because in that way, they could portray Bibi Netanyahu who actually gave an accurate assessment as an alarmist, trying to stir up war or whatever and to justify the long drawn out negotiations that were renewed twice, even though the President had said we're going to give it six months and then we're going to heap on to more sanctions. The reason they are telling us now the truth, which they have known, as the secretary of education is admitting right now, I mean, of energy is admitting right now, the reason they're acknowledging now that it's short is also to serve their political purposes.

They're on the verge of a deal. They want the deal. And they want to say, look how -- what we've accomplished.

We've stretched the breakout from two months to a year and also to generate alarm to say, well, we have to do this because the Iranians are so close to acquiring a bomb.

But this shouldn't surprise us. With ObamaCare, Obama said to everybody, if you want -- if you like your plan, you'll keep your plan.

They knew that would not be true. They assured Americans, if you liked what you had, you'd be OK.

And then, millions of plans were canceled. This administration that is determined to get a deal and will not let the facts stand in the way.

MARA LIASSON, NATIONAL PUBLIC RADIO: Yeah, but the facts that they are expressing now are the same facts that Benjamin Netanyahu thinks are facts. So now, they're on the same page as the Israelis.

Before, they wanted to push the Israeli request for some kind of a military action or whatever it is that Israel wanted back then off so they said it was longer.

KRAUTHAMMER: Well, to that -- to that point, Mara.

LIASSON: But now, at least they're on the same page.

KRAUTHAMMER: To that point, Mara, April 8, the White House put out a tweet. And it used the image that Netanyahu.

KRAUTHAMMER: ...knew, in fact, in September 2012. And the White House image you see here in this tweet is why the deal is good using the same bomb.

KRAUTHAMMER: ...that Netanyahu used. Netanyahu back in September was saying, it's two to three months.

LIASSON: And -- and now the White House agrees only they claim.

LIASSON: Yes, back then. So the -- the transgression, the thing that they did wrong was back then, not to be as alarmists as Netanyahu. Now, they are being as alarmists, only they have a completely different solution.

KRAUTHAMMER: It's not being as alarmist as being as being truthful.

LIASSON: Big difference. And I think the consensus seems to be and it's been for months that they are two to three months away. Now the question is, what do you do about it?

GEORGE WILL, SYNDICATED COLUMNIST: We have no idea.

WILL: Well, this -- this charade of precision -- some people say two or three months. Some say 12 months.

This all takes place in the shadow of 2002, 2003, when the intelligence agencies not only of this country but around the world we're all agreed that Saddam Hussein had substantial weapons of mass destruction program that he did not have. Now, given that -- I mean, Charles says, well, they just now told us the truth.

No, they told us their guess. They may be changing their guesses for the political reasons that Charles suggests, which may be true.

But it's a guess. Seventy years ago, this summer, in Alamogordo in New Mexico, the first nuclear explosion, four years later, the second nuclear power, leading John Kennedy as candidate and president to predict a cascade of proliferation, 20 or more nuclear powers by the mid-60s, he said.  Didn't happen.

KRAUTHAMMER: You don't Iran is developing a nuclear.

WILL: Of course, I think they are. But I do not know.

KRAUTHAMMER: And you don't think it would.

WILL: I think it is preposterous to say that we have the capacity, the transparency of Iran to know whether they're two or 12 months away.

KRAUTHAMMER: You don't think that if Iran acquires a bomb, there's going to be a proliferation of the kind that Kennedy and others...

KRAUTHAMMER: Had spoken about in the past?

WILL: An interesting question but a separate question. I'm only talking about this, as I say, this pretense of -- of precision about how close they are.

KRAUTHAMMER: Whether it's precise or not, you have an obligation to be honest about what your estimate is. And it's the lying about the estimate that is at issue right here.

WILL: OK, as long as we are agreed it's a guess.

BAIER: The bottom line here is the administration now has settled on this two to three months.

BAIER: And they say this deal is the way that delay, at least...

BAIER: ...Iran getting a nuclear weapon. Israel is saying, that's not good enough.

I mean, that's the big difference. The president really believes that if you bring Iran into the community of nations and lift the sanctions, maybe the regime will change. That's a very big bet.

BAIER: That said, he -- he probably already -- also believes and maybe doesn't say it publicly that Iran will eventually get a nuclear weapon at 10 years, 12 years, 15 years. And he's just delaying it.

LIASSON: And guess what, if that happens, Saudi Arabia will, too, so will Turkey. And there will be a lot more nuclear armed countries.

BAIER: If they haven't already.

LIASSON: Yeah, if they haven't already.

WILL: Just -- just to try to understand the position that policymakers are in in this country, do the same intelligent agencies that know that we are within two or three months, are they going to know when they start to close that gap and go to two months or two weeks?

LIASSON: Yes, how will we know when they rush to the daylight or do rush to breakout?

KRAUTHAMMER: We have a - a pristine record of being wrong .And if you don't know precisely, then you do the only thing that could possibly delay them from achieving their weapon, which is crippling sanctions in an atmosphere where they've already lost half their revenue from oil because of the oil price. They are totally (ph).

LIASSON: But Russia already abandoned it.

KRAUTHAMMER: No, it hasn't. It has agreed to -- to supply them with missiles. That's not an impediment of the sanctions.

You apply what you can apply. You continue the sabotage which has clearly helped them back over these years and you deploy the credible use of force, if not American, then you -- you let them know that you would approve of an Israeli use force -- Obama has done precisely the opposite. He's removed all the incentives Iran has to hold back.

WILL: In 2007, the U.S. Intelligence Agency said that Iran had abandoned its nuclear weapons program. In 2013, the president said they have -- we had, by agreement, halted their program.

BAIER: But you concede two to three months is much different than a year if you're making public pronouncements about what your assessment is privately?

WILL: Yes, if stipulating confidence in the intelligence estimate that can distinguish between three months and 12 -- that nine-months difference.

BAIER: Coming up with the panel, staying on this issue, different place outside Yemen. What is happening with American naval ships there? And what will happen?