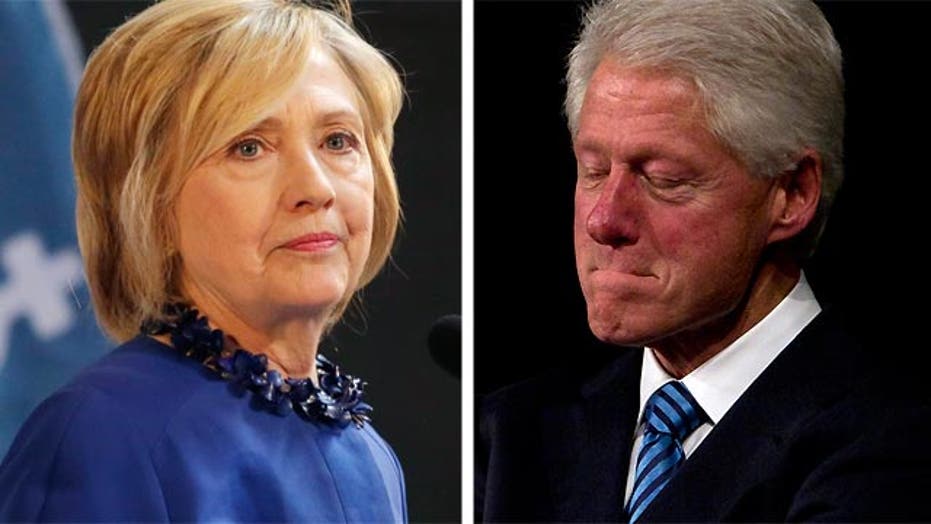 This is a rush transcript from "Special Report," April 30, 2015. This copy may not be in its final form and may be updated.

FORMER PRESIDENT BILL CLINTON: And if your wife is secretary of state and you get sponsors in another country, they may be doing it just because they believe in it, but it opens up too many questions of conflicts of interest, so we suspended those.

CHRIS WALLACE, ANCHOR: Hillary Clinton at her confirmation hearing for secretary of state back in 2009 and Bill Clinton near the end of her time there pledging full transparency to avoid even the appearance of a conflict of interest from foreign donations.

CHARLES LANE, OPINION WRITER, WASHINGTON POST: I suppose it depends on which excuse you're talking about, because in the case of the Canadian money, what you're hearing from the Canadian guy in charge of that is Canadian law prohibited the disclosure. And so there was confusion about that, but there's controversy about if that's really what Canadian law says or not.

WALLACE: Because The New York Times, which broke that story, says that they went to Canadian officials and Canadian lawyers who said certainly after 2010, so at least the last three years, that they could have disclosed everything.

LANE: Exactly. So what we're describing is the basis for a whole series of new stories about who is telling the truth about that point. So that's one.

And then you have the Global Health Initiative which is based in Boston. And what was interesting about that story is I didn't see a long list of who those countries were, The Globe didn't seem to get far on that. And the countries that were listed in their story were not actually the most controversial. It was sort of like Switzerland and stuff. That one it looks to me like if it turns out the names when they finally release them are Switzerland, Netherlands, Britain, they'll be OK. But if there are more Russias in there, if there are more Middle Eastern countries in there, then there's more trouble.

WALLACE: But, you know, A.B., the whole point of the agreement that the Clintons worked out with the Obama administration back in 2009 when there was all of it this talk about a potential conflict of interest was that to avoid even the appearance of it any donation by a foreign entity to the Clinton Foundation had to be disclosed. Haven't they -- whatever -- however benign the country, haven't they violated that?

A.B. STODDARD, ASSOCIATE EDITOR, THE HILL: I would agree. It doesn't party whether it's from Russia or Switzerland. They said they wanted to be transparent, and in their actions they did not want to be transparent. She has not put distance between herself and any ethically dubious potential conflicts of interest, not at all.

The foreign donations to the Clinton health program out of Boston doubled in three years when she was in the State Department. The number of donors who lobbied the State Department when she was secretary of state, you know, almost 200. Not only the amount of speeches but what he was paid for them went way up when she was secretary of state. There might not be a smoking gun but there's so much smoke that the Clintons with that many smart people in a large organization, we're not talking about a couple disorganized bumblers. We're talking about policy that was set and kept by everybody.

WALLACE: You know, I want to get to at that point exactly, Yochi, because foreign entities, whether it's a foreign government, a foreign business, a foreign individual, they have their own charities in their own countries. If you're from Saudi Arabia you could donate to a Saudi Arabian charity. Are we being too cynical in questioning whether or not when one of these foreign entities, government, business, individual, gives money to the Clinton Foundation to wonder whether they are trying to curry favor with the then-Secretary of State Hillary Clinton.

YOCHI DREAZEN, FOREIGN POLICY: I don't think it's a cynical thing to wonder because I agree with our two other guests. The excuses keep shifting one after the other. In the case of the Clinton Health Access Initiative, Rwanda gave a contribution that was not disclosed, and they said that's because it was a fee. It was not a contribution. The United Kingdom gave money, but they said it wasn't increasing by very much so we didn't have to disclose because there was no increase in the gift. So you're really parsing at that point.

And when you parse that far down the macro question of were they getting gifts to buy influence with the current administration, were they buying gifts to curry favor with the next administration, those macro questions just dangle again and again and again, and these little kind of microscopic answers, they don't get addressed and they don't help solve those.

LANE: Well, I was just going to add, one of the things we learned in that Boston Globe story was the guy in charge up there of the Clinton Global Health Initiative [inaudible] was getting paid $400,000 a year to run this charity. If you're getting paid that much money I think you should be doing a better job of monitoring all these --

WALLACE: We've got less than a minute left. I want to pick up exactly on that, because Charity Navigator, which is one of the most respected charity watchdog groups that sits there and rates is a charity legit or are they spending questionable money, says that they cannot rate the Clinton Foundation because of its, quote, "atypical business plan -- business model." And one of the questions they raise is that so much money is being spent on administration and not on direct services A.B.

STODDARD: Right. I mean, earlier today, on the broadcast it was something like a measurement of 10 to 12 percent, which is pitiful. The Clinton Foundation and the Clinton campaign would be citing Charity Navigator right now, if they had got a good rating about what an upstanding organization they are. They just as Yochi said, they have got to answer questions about why they weren't transparent, all the good they were doing, or they're letting it bleed. And it literally sounds, like their enemies say, a slush fund to enrich the Clintons.

WALLACE: Well, and interestingly enough there was a lot of talk from the Clinton supporters this story is going to die out. It doesn't seem to be dying out. It seems, in fact, to be snowballing with questions.

STODDARD: She can't change the subject. She can talk about Baltimore or whatever policy she wants. Until she answers this --

All right, we have to take a break here. Next up, negotiations over a nuclear deal with Iran ramp up again, so does the jockeying for advantage.