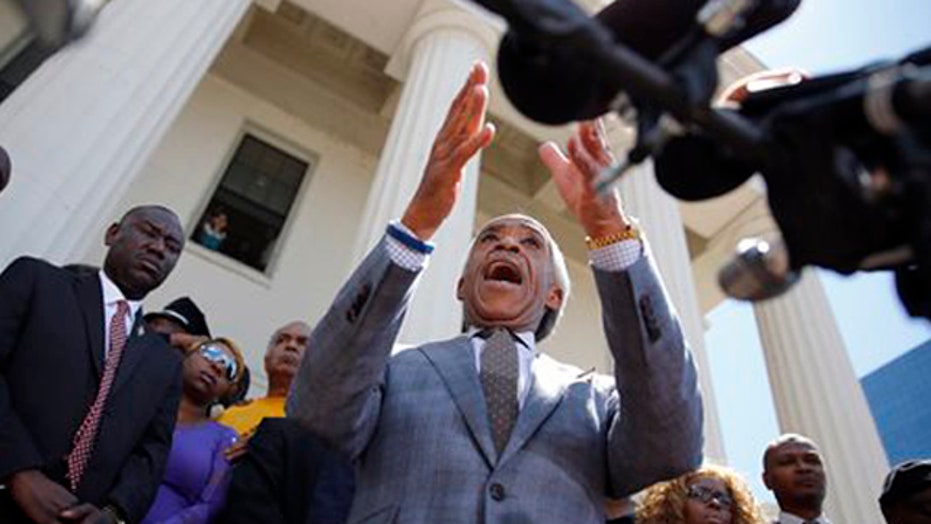 This is a rush transcript from "Hannity," August 14, 2014. This copy may not be in its final form and may be updated.

REV. AL SHARPTON, NATIONAL ACTION NETWORK: In order to establish peace, you must have fair justice for everyone. We want real peace. We don't want to just be told to shut up and suffer in silence. We must have answers!

SEAN HANNITY, HOST: Now, despite the Reverend Al Sharpton's efforts to interject himself into the Ferguson shooting, prominent black leaders, as well as city officials, are voicing major concern about his involvement and urging him to use caution.

Now, just yesterday, the Ferguson mayor had this to say during an interview with Newsmax and Steve Malzberg. Take a listen.

MAYOR JAMES KNOWLES, FERGUSON, MISSOURI: Sometimes star power is not always a good thing. There's competing protests today, and Sharpton -- there's been some comments made by some leaders who don't want Sharpton's protest to happen today, so -- African-American leaders and some of the African-American elected officials. So you know, it's unfortunate, you know, even -- even the groups concerned here are not necessarily on the same page.

HANNITY: And earlier this morning, the niece of Dr. Martin Luther King, Jr., Alveda King, said this on "Fox & Friends." Take a listen.

ALVEDA KING, MARTIN LUTHER KING'S NIECE: When Al Sharpton comes, sometimes I don't know what his goal is, but people continue to riot and things escalate. And so I'm asking now, speak peace, Reverend Sharpton.  Speak love. Speak justice. But you can have justice without violence.  Our Jesus Christ showed that. Gandhi showed that.

HANNITY: All right, here with reaction is -- St. Louis NAACP President Adolphus Morris Pruitt is with us. Welcome to the program.  Thanks for being with us.

HANNITY: What's your reaction to -- well, you're got the New Black Panther party, Louis Farrakhan has spoken out, and the Reverend Al Sharpton is there on the ground. Helpful? Does it hurt? Is there a rush to judgment on his part or the part of some?

PRUITT: Well, no, I don't necessarily think it's a rush to judgment on his part or anybody else's part, at this point in time. I think we're all looking to find out what the answers are. And as far as I was concerned, he's basically called for peaceful demonstrations, and at the same time, he's asked for the Justice Department to do the right thing and come in and provide some outside eyes on the prize and let's see what's going on.

HANNITY: Do you have a conclusion? Because there's obviously been an outcry in the community about this, and there's been violence and mayhem and looting, and you know, "the only good cop is a dead cop" and "kill the police." What is your reaction to all of those calls for violence and the reaction of some?

PRUITT: Well, you know, I guess it's easy for some people to reach conclusions when they look at things from afar. Based on what we've been able to ascertain on the ground here, on that Sunday right after the vigil, what really started all of this was the police shot a flare up in the air.  The crowd did not move. They then turned around and shot a flare into the ground, and it skipped towards the crowd, and the crowd responded. I'm not saying that they were supposed to...

HANNITY: Does that justify the looting, though? I mean, we've seen looting...

HANNITY: Look, I wasn't there. You weren't there. We only...

PRUITT: I wasn't there when they shot the flare, but we've identified witnesses who told us...

HANNITY: And we've seen this reaction. You know, I understand that people may rush to conclusions. What do you make of what the eyewitnesses have said? For example, this one eyewitness that I referred to in the last segment, Tiffany Mitchell, saying that there was a struggle with the officer and Michael Brown, Michael Brown reaching into the police car, and that that was where the first shot was fired?

What do you make of what I would call part one of this struggle?  Because, you know, that in and of itself raises a lot of questions, doesn't it?

PRUITT: It raises some questions, but on the other hand, we've identified four witnesses so far who said something that's just the opposite. So the question is, is -- is for the...

HANNITY: Well, she seems to corroborate what the other three say, and that is that at some point, there was quite a distance between the officer and Michael Brown, and the officer fired. So there seems to be two parts of this. That is the initiation of contact, which was when the police officer was in the car, and then the second part of this is when Michael Brown was going down the street and whether or not he had his hands up and the officer still fired, right?

PRUITT: No, every witness that we've spoken with and that we've put in front of federal authorities has basically said that the officer reached his hand out of the car and grabbed Michael Brown by the neck. And that was the initiation of the contact.

PRUITT: So if anybody says something different, it's a witness I haven't spoken with.

HANNITY: Well, they're just -- all she was saying is they appeared to be wrestling from the car. So I'm not really sure...

PRUITT: Each witness we had said something different.

HANNITY: The mayor of New York and the New York City police chief recently said, when you are being arrested, don't resist. This has nothing to do -- this question really has nothing to do with this specific incident. But we've seen a lot of incidents where people do resist arrest.

Do you agree that it is best for anybody, when the police come up to you and say, You're under arrest, to not resist? Do you agree with that sentiment?

PRUITT: I agree with it when the police do say you're under arrest.  In the Michael Brown situation, that did not occur.

HANNITY: Well, you don't know that. You weren't there.

PRUITT: No. I'm saying, from the witnesses we talked to -- and we have some idea of what the policeman's statements was, that did not occur.

HANNITY: OK. Bottom line is, I think, for everybody not to make a rush to judgment is probably the best thing.

HANNITY: And I believe the facts will come out. And certainly, those witnesses will hold a lot of weight in a court of law, I think. All right...

HANNITY: ... thank you so much for being with us. We really appreciate it.