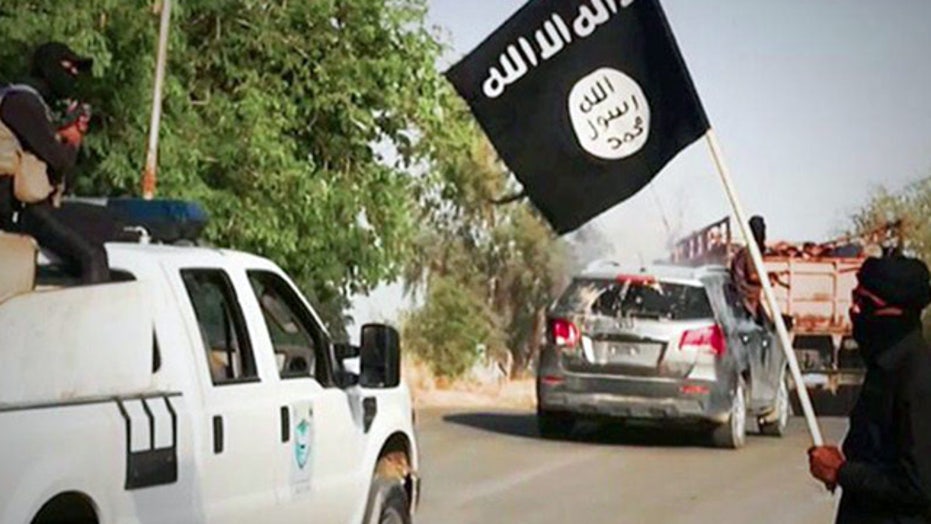 What's it like inside the US embassy in Iraq?

This is a rush transcript from "The Kelly File," June 16, 2014. This copy may not be in its final form and may be updated.

MEGYN KELLY, HOST: Breaking tonight, a troubling report on the terror group now in control of a third of Iraq. The State Department is now pulling hundreds of staffers from the U.S. Embassy in Baghdad as this terror group controls more of the territory around the capital city. Not only are we getting new reports that this group may have executed as many as 1,700 Iraqi security forces in recent days including in a massacre that they put online and bragged about. But today, we learned that the same group may now be in possession of a deadly cash of American made fire power, stinger missiles. They are powerful enough to take down a commercial airliner.

Joining me now, Buck Sexton, a former CIA officer who has worked in Iraq and national security editor for TheBlaze.com and retired Air Force Lieutenant General Tom McInerney, also a Fox News contributor. Gentlemen, thank you both so much. General McInerney, explain the stinger missile and the importance of them getting their hands on them?

LT. GEN. TOM MCINERNEY (RET.), U.S. AIR FORCE: Well, it's called a man pad. Its shoulder mounted. And it's a very effective missile. It's U.S. made equivalent to the Soviet SA-7s and follow in missiles, it can be very lethal against aircraft if you do not have what we call decoy flairs. And if you've got decoy flairs and if you're aware that they're in the area, most fighter pilots, all fighter pilots, U.S. fighter pilots can handle them. But it changes the name of the game. So, for the first time in the last 11 years, we now may now see a potential ground to air threat.

KELLY: This is so disturbing. It's on the heels of reports last week that they have our humvees that we have provided to Iraqi security forces which are just cutting and running, Buck. They're just cutting and running. And in their defense, they're cutting and running in part because of the brutal massacres that we believe we're seeing on the streets of Iraq. I mean, this group is claiming all sorts of terrible things and posting terrible documentation of it. The State Department is condemning it as horrific but not confirming that in fact it's happened.

BUCK SEXTON, FORMER CIA OFFICER WHO WORKED IN IRAQ: They're using fear as a weapon as they have in the past. By the way, I would point out that even before these man portable air defense systems, shoulder fired missiles essentially, before the report today it's likely that this group Al Qaeda, in Iraq, in Syria, or Al Qaeda in Iraq in Levant may have already had access to that very kind of weaponry. Not necessarily the American made variant, but the SA-7 for example, because of the shoot downs that ever occurred in Syria. We know that the Al Qaeda affiliate if you will in Syria has been using that against rotary aircraft, meaning helicopters using against fixed wing aircrafts as well. So, they probably have this.

By the way, one of the biggest assets of the Iraqi army or in this case, Iraqi Air Force can call into play, is air superiority. So, if they do in fact have this cash of weaponry, it means that one of the biggest tools that Maliki out of Bagdad, the Prime Minister has in his tool essentially not nullify but certainly neutralized to a large extent.

SEXTON: And on top of that, with this assassination, with these murders out in the streets, the Iraqi army is petrified.

KELLY: We're sending now 250 troops over to Iraq to help guard the embassy and provide security. In the meantime, General McInerney, apparently were considering becoming BFFs with Iran. I mean, I want to keep it simple for the viewers to understand but we are talking about, our Secretary of State confirmed today, we are not ruling out possible military cooperation with Iran in Iraq to defeat this crazy Al Qaeda affiliated insurgents. Should we be doing that?

MCINERNEY: Very bad idea, Megyn. The last thing we want to do is to complete the relationship and the closeness between Iran and Iraq. Look, for the last years since this administration has been in, the Iranians have had key people in every agency in Maliki's administration. So, they've had undue influence. This would just increase it. We do not want to increase the presence of a crescent, the Shia crescent, that meaning the Iranians dominating the Arabian Peninsula. We do not want that and so, I strongly urge against it.

KELLY: But, you know, Buck, a lot of people back here may be thinking better them than us. If they want to get involved in Iraq, better the Iranian military go over there and do it than our guys.

SEXTON: Well, that was the very famous Kissinger phrase about when Iraq and Iran were fighting a very long and brutal war between the two of them that he -- that they can both loss. Essentially in this context, you have Iran which is absolutely already involved in the conflict going to become more involved. And don't forget --

KELLY: They were involved in the conflict killing our guys.

SEXTON: They were involved in the conflict killing our guys and they were backing Shia death squads in Baghdad and the surrounding areas who were killing civilians as well as suspected Sunni terrorists. So, Iran's hand is going to be all over this. They definitely involved very directly. And don't forget by the way, that the Sunni Arabs state in the region, as much as they don't talk about it, places like Saudi Arabia and other gulf countries, some people in those countries will be backing these very same terrorists. We see flying the flags of Jihad. And so, this is a proxy civil war, Megyn. That's what's happening here.

KELLY: Well, that sounds, you know, basically Iran backs Maliki and his, you know, Shiite people. And then the Sunni insurgents are against them. And the Al Qaeda folks are trying to exploit that relationship. Let me ask you this, General McInerney. Does Iran's willingness to jump into Iraq make you more or less likely to think that we should take a bigger investment there?

So the one thing I do not want to do -- and it's a close call -- is turn Iraq over to Iran completely. I think we need to stop this ISIS group that is trying to sweep across into Iraq. But clearly -- and it's a close call -- until Maliki gets his act together, I think the administration has every reason to be very concerned about what's going on there. We need to get --

KELLY: I've got to leave it at that. Gentlemen, thank you both.