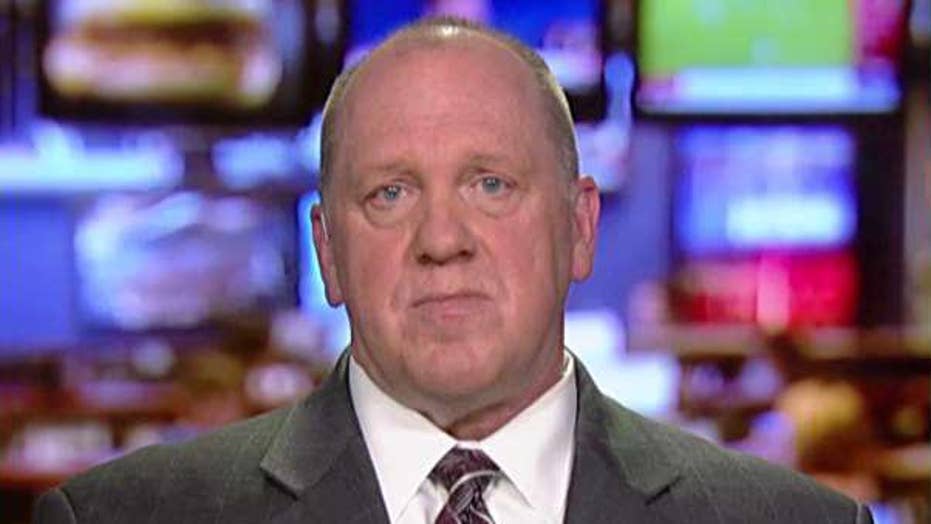 On 'Your World,' Thomas Homan sounds off about California officially becoming a sanctuary state.

This is a rush transcript from "Your World," January 2, 2018. This copy may not be in its final form and may be updated.

NEIL CAVUTO, HOST: All right, there are sanctuary cities and towns, but a sanctuary state?

Well, California officially becoming the first such state in the country.

Governor Jerry Brown says it's, well, meant to really protect illegal immigrants living in the shadows of society and making sure authorities don't try to yank them out of there.

But acting ICE Director Thomas Homan says it's putting politics above public safety. He joins us now with his first interview since the Golden State became this sanctuary state.

Very good to have you, acting director.

I mean, I couldn't believe this when I heard it, because it's one thing when a city or a community kind of unofficially espouses these views. Quite another for a governor to put the stamp and his blessing behind it on statewide level. What do you make of it?

You have a state of California that wants to put politics ahead of public safety, ahead of offshore safety. What they have done is force my officers to arrest dangerous criminals on their turf, in their homes, and their places of business, rather than arresting them in the safety and security of a county jail.

It's ridiculous to knowingly and intentionally put law enforcement at risk. It's just -- and the American communities, the communities themselves put at risk. When you release a public safety threat back into the public, it's just a foolish decision they made.

CAVUTO: What can you do if you are not going to get local help in trying to track down folks you say not only shouldn't be here, but they're a threat to people here?

HOMAN: Well, look, if he thinks he's protecting the immigrant community, he's doing quite the opposite, because if he thinks ICE is going away, we're not.

There's no sanctuary from federal law enforcement. As a matter of fact, we're in the process now, I'm going to significantly increase our enforcement presence in California. We're already doing it.

We're going to detail additional enforcement assets to California. California better hold on tight. They're about to see a lot more special agents, a lot more deportation officers in the state of California.

If the politicians in California don't want to protect their communities, then ICE will.

CAVUTO: So, Director, what do you do if local police turn the other way and say, all right, our loyalty is to the governor?

HOMAN: Well, first of all, the street cops, they do not like this legislation. They're totally against it.

The street cops understand what we're trying to do. We want to take public safety threats out of the communities. And so this comes to -- this is a political decision. This is not a law enforcement decision. No one thought about the safety of law enforcement when this decision was made.

No one thought about cases like Kate Steinle and others. I can give example of example. In Sonoma County a few weeks ago, an illegal alien was arrested. We put a detainer on him. He was arrested for domestic violence.

Sonoma County didn't honor the detainer. What happened? Two weeks later, he killed that girl. Now she has two young daughters without a mother. So, I can give you example after example of the effect this law is going to have on the community safety in the state of California.

So, California just bit off a lot more than they can chew.

CAVUTO: How do you follow up on that, though? How do you search these individuals out without looking, as I think the governor was intimating, like the Gestapo?

HOMAN: I have got 20,000 American patriots that work for ICE.

They strap a gun to their hip every day and leave the safety and security of their homes to protect these communities, to protect the homeland. So, shame on Governor Brown for that opinion.

And we're going to enforce the law without apology. What I'm also doing is working with the Department of Justice. For these sanctuary cities that knowingly shield and harbor an illegal alien in their jail and don't allow us access, that is, in my opinion, a violation of 8-USC-1324. That's an alien smuggling statute.

I have asked the Department of Justice to look at this. Are these sanctuary cities, can we hold them accountable? Are they violating federal law? So, there's more to come on that. And that's certainly an angle we're looking at.

CAVUTO: But what if they do just that? What do you do?

CAVUTO: What if they do just that? What do you do?

HOMAN: I think we charge some of these sanctuary cities with violating federal law.

I think if they knowingly harbor and shield a known illegal alien, a public safety threat, in a jail and won't give us access to that alien...

CAVUTO: But they are, director, right? In a lot of cases, they're just that. Then what do you if they're protecting or there's a shield of protection around such individuals? How do you force the point?

HOMAN: We got to work with the Department of Justice.

The Department of Justice needs to do a couple things. Number one, they need to file charges against the sanctuary cities. Number two, they need to hold back their funding.

HOMAN: Absolutely, he does.

CAVUTO: And he's told you that?

HOMAN: The president is totally against sanctuary cities.

He knows, as well as I do, that people are dying. People are being victimized by illegal aliens in this country. And there are certain sanctuary cities that don't want to cooperate with us.

Look, this is about the American public. This is about the U.S. citizens are being victimized by some of these criminal illegal aliens. We have got to hold sanctuary cities responsible.

This is going to continue. The crime rate in California is going to increase. If you just Google recidivism rates, at least 50 percent of these criminal aliens being released back into the public will re-offend the first year. Seventy-five percent will re-offend within five years.

This is a victimization of the American community. This isn't the America I grew up in. We got to take these sanctuary cities on. We got to think them to court. And we got to start charging some of these politicians with crimes.

CAVUTO: Director, thank you for taking the time.

Thomas Homan, the acting ICE director, joining us out of Washington, thank you, sir.