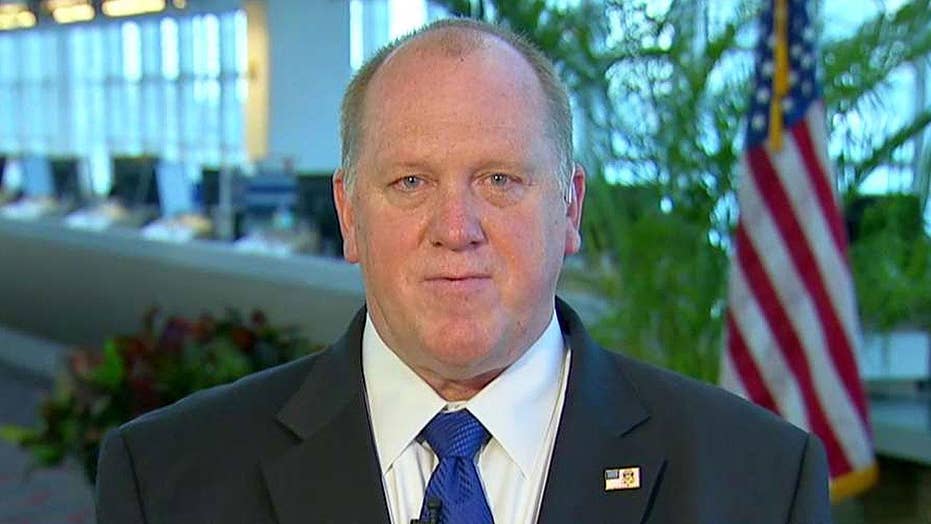 This is a rush transcript from "Your World," August 16, 2017. This copy may not be in its final form and may be updated.

TRISH REGAN, "YOUR WORLD" GUEST HOST: Taking the showdown over sanctuary cities on the road.

They say it's needed to combat violent crime. We're going to talk to the ICE director in just a moment.

But, first, let's go to Steve Harrigan in Miami, who has the very latest for us

STEVE HARRIGAN, FOX NEWS CORRESPONDENT: Trish, the attorney general was at the Port of Miami today speaking before about 100 law enforcement agents.

Since January here in Miami-Dade County, anyone in a county jail can be held for an additional 48 hours to be interviewed by ICE experts if immigration status is suspect. So far, at least 170 people have been turned over to ICE because of that.

The mayor has said this move is controversial. He said he made it largely because of possible loss of funding. He feared the loss of several hundred thousand dollars in funding from the federal government for law enforcement initiatives and equipment if he failed to comply with these rules -- Trish, back to you.

REGAN: All right, thanks so much, Steve.

I want to go right now to acting ICE Director Thomas Homan, who just delivered that speech in Miami.

And give us a sense of the frustration you feel right now towards places like San Francisco, like Chicago.

THOMAS HOMAN, ACTING U.S. IMMIGRATION AND CUSTOMS ENFORCEMENT DIRECTOR: Well, you know, Chicago and San Francisco, they obviously don't learn their lessons of what's been going on in their city.

Chicago, for instance, has the highest crime rate they have had in years. And they -- are they doing everything they can to prevent that crime? I say they're not, because a certain population of those criminals are illegal aliens.

And when they get booked in Cook County Jail, my officers don't have access to them. They don't accept our retainers. So these criminal aliens go back onto the street to re-offend.

The recidivism rate is as high as 75 percent. They're going to commit more crimes in Chicago. So, I would think Chicago would do everything they can to work with me to remove these people from the communities and from the country.

REGAN: Instead, Chicago, you know -- forgive me. I think there's a little bit of delay in our sound.

But, instead, you're seeing the antithesis of that, Thomas. They not seem to be willing to work with you, because why?

HOMAN: Look, they're making a political statement. They're putting politics ahead of public safety and officer safety.

Let me give you an example. I don't care what talking points they want to use or what political message they're trying to send. Every time a criminal walks out of a county jail, one of my officers have to go knock on the door.

And any law enforcement officer that's in the business is going to tell you that is a dangerous position to put a law enforcement officer in. These are men and women that serve ICE, strap a gun to their hip every day, leave the safety of their homes and their families to defend their communities and protect people they will never meet.

We looked at today the numbers today I have seen today before I came down here to Miami. Nearly 10,000 criminal aliens that have been released, rather than turned over to ICE, nearly 10,000 have recommitted another crime.

And, you know, Chicago needs to wake up, because what they're doing is not right.

First of all, the president has given us 10,000 more law enforcement officers for ICE. We're in the process of hiring them the next couple years. The first place I'm sending these additional resources are to sanctuary cities.

So, if they think they're going to skirt the law by releasing these people into the community, I'm going to send addition officers up there. I'm going to surge officers to go find these people, take them into custody, and remove them from the country.

We also need to look at not only pulling their funding, which a point was made today by Attorney General Sessions. The government is not pulling their funding. It's actually the mayor and the politicians who made the decision not to cooperate with us. They're the ones that actually pulled their own funding.

And the third thing I talked to attorney general today about was, you know, we need to look at these jurisdictions, are they crossing a legal line, are they committing a statutory crime by 8-USC-1324, alien smuggling?

There's a part of that law that says that if you harbor, conceal or shield, knowingly shield an illegal alien from law enforcement, that's a crime.

So I have asked the attorney general. We need to look at this and find out, are these jurisdictions on the right side of that law?

REGAN: I'm a big believer state rights, individual rights. But this is one here where it seems to me, Director Homan, the federal law should supersede, because we have a duty as a country, we have a duty to keep everyone safe and to protect our borders.

REGAN: All right, Director Thomas Homan, thank you very much. Good to have you here, sir.