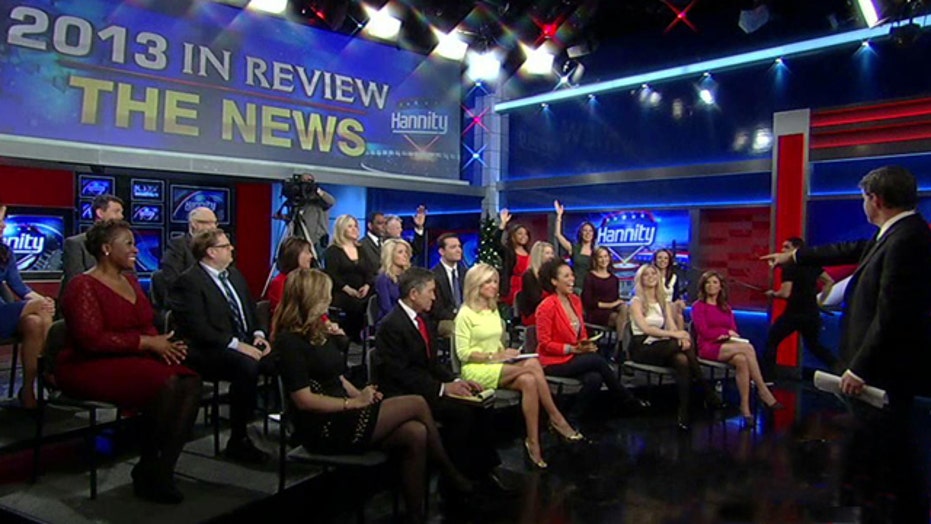 Studio audience tackles the biggest moments of the year

This is a rush transcript from "Hannity," December 26, 2013. This copy may not be in its final form and may be updated.

SEAN HANNITY, HOST: And welcome to this special edition, "2013 in Review." And tonight, with the help of this rowdy studio audience behind me, we're going to count down the scandals, the winners, the losers, and the most memorable moments from this show over the past year.

But we begin with a look at the top five news stories of 2013. Take a look.

(CROWD CHANTING "NO JUSTICE, NO PEACE!")

UNIDENTIFIED FEMALE: Are you kidding me?

JODI ARIAS, CHARGED WITH MURDER: I didn't kill Travis. I did not take his life.

UNIDENTIFIED MALE: Did you kill Travis Alexander on June 4th, 2008?

REP. STENY HOYER, D-MD.: You're about to shut down the government!

REP. JOHN BOEHNER (R-OH), SPEAKER OF THE HOUSE: The American people don't want it shut down, and neither do I.

(CROWD CHANTING "THE SHUTDOWN HAS GOT TO GO")

PRESIDENT BARACK OBAMA: We're not going to negotiate under the threat of further harm to our economy and middle class families.

BOEHNER: We've been tying to have conversations with the Democratic colleagues. They don't want to talk.

SEN. TED CRUZ, R-TEXAS: Why is the federal government spending money to erect barricades to keep veterans out of this memorial?

OBAMA: The product, the health insurance, is good.

KATHLEEN SEBELIUS, HHS SECRETARY: I want to be clear. We are ready to go on October 1st.

OBAMA: Nobody's madder than me about the fact that the Web site isn't working as well as it should, which means it's going to get fixed.

SEN. MARCO RUBIO, R-FLA.: The inability of the federal government to set up a Web site where people can go on and buy something like health insurance does not bode well for the much more complicated elements of this law that are yet to be rolled out.

OBAMA: We know that two explosions gravely wounded dozens of Americans and took the lives of others, including an 8-year-old boy.

This was a heinous and cowardly act. The FBI is investigating it as an act of terrorism.

HANNITY: Now, that was our countdown of the top five stories of 2013. But tonight, we want you to join the conversation. Just log onto our Facebook page and tell us if you agree with the list. Plus, you can "Trend at 10," and you can sound off on Twitter. Use the hashtag #hannity over the course of the next hour. My address, @seanhannity.

Here with us, our studio audience. Ainsley Earhardt -- @ainsleyearhardt, by the way, on Twitter.

AINSLEY EARHARDT, CO-HOST, "FOX & FRIENDS FIRST": You're so good to me. Thank you, Sean.

EARHARDT: You always promote the show. I appreciate it.

HANNITY: You're on five to six. You get "Fox and Friends" started.

EARHARDT: Five to six am -- early, early. Yes. Thank you.

HANNITY: All right. What was the top story of this past year?

EARHARDT: Gosh. Well, I would say ObamaCare probably for me because I've been working on your show so much with ObamaCare. But definitely, I mean, watching that -- that whole package with all of them together -- the Boston Marathon bombing -- I thought that united our country, such tragedy, but united our country. And also Zimmerman shook our entire country. It was tragic. You hear the sound bites from the parents who lost their son and brought up so many racial issues for our country...

HANNITY: Zimmerman and then the "knockout game."

HANNITY: Then you can talk about the government shutdown and then ObamaCare. A lot went on.

What was the top story?

KIRSTEN HAGLUND, FORMER MISS AMERICA: Well, I think, obviously, the ObamaCare rollout has been significant, and everything leading up to that. I think that this year has been categorized by disenchantment, I think, with the government on all levels. And ObamaCare was really -- that was -- that was, you know, where it took its course, and so -- and obviously, government shutdown is included in that. But I think disenchantment from the American public, millennials, liberals and women with the current policies.

HANNITY: Jehmu, was this a good year for Barack Obama? You're his biggest supporter in the room.

JEHMU GREENE, FOX CONTRIBUTOR: He's had better years. 2012 certainly was better. I think that he saw a huge uptick with the government shutdown that was then completely squandered when the website went...

HANNITY: By the $600 million and the three-and-a-half years and the botched rollout and the broken promises and the lies that he told us about ObamaCare?

GREENE: But here's the thing that's going to happen, Sean...

HANNITY: You mean that one?

GREENE: Right as we turn into 2014, ObamaCare is turning around. The White House is turning the corner and so...

GREENE: ... and we'll forget the rest of this (INAUDIBLE)

HOLMES: Wasn't 2013 the year that we saw the Obama presidency collapse? We had the NSA wiretapping scandal, which, as we know, touched millennials and touched on their -- this new disenchantment...

HANNITY: Hold this thought. (INAUDIBLE) right back (INAUDIBLE) Who thinks this was the year of Obama's collapse? Raise your hands. Get a shot. Wow! Except -- who says no?

RACHEL SKLAR, THE LI.ST FOUNDER: I say no!

HANNITY: Wait. All right, we're going to get back to Amy first. I say no -- we got four people, five people. OK. I agree with you. I think that's a great analysis, the year of his collapse.

HOLMES: We had -- yes. We had the Syria red line fiasco with President Obama when it came to foreign policy, the NSA wiretapping when it came to American citizens and journalists, by the way. Let's not forget Fox's own James Rosen. We had the IRS scandal, where we learned that our government was possibly using the IRS to intimidate and suppress opposition voices!

And then, of course, we still haven't -- we still haven't apprehended the Benghazi perpetrators, and then Obama Care to top it off! It was at terrible year for the president, and we've seen his disapproval ratings, and a lot of Americans do not have trust and faith in the commander-in- chief.

SKLAR: I think that when you talk about the "collapse," I don't see an administration in collapse at all. I actually see a health care rollout that had a lot of bumps, but now the Web site is working. People are actually...

HANNITY: Half the Web site isn't built -- wait a minute! He has the lowest approval rating at the end of a fifth year than any other president since Richard Nixon!

Help me out. George W. Bush had a higher approval rating after year five than does Obama!

SKLAR: You know, people are getting health care that couldn't get health care before. I actually think...

HANNITY: You believe that?

HANNITY: Do you really believe that?

SKLAR: ... more and more every day. You know, the IRS, quote, unquote "scandal" wasn't a scandal at all. It was actually the IRS doing its job to keep political organizations of both stripes...

KATIE PAVLICH, FOX CONTRIBUTOR: The fact that you are still justifying the IRS scandal targeting conservatives is appalling! And I'm not surprised because the president did it, too. He came out when the IRS scandal came out and said, I think this is outrageous and no way should the IRS be used to target political opponents. And then about two weeks ago, he says, Well, I can't believe that they were outraged because there was a list.

There was a list. It's inappropriate. And it's unfortunate that we can't even come together on the issue of the IRS targeting political opponents! What if they were doing it to the other side?

HANNITY: Wow. All right. I see we're getting all -- the eggnog has kicked in.

Let's go to Congressman Kucinich. By the way, welcome to our studio audience. Good to see you.

HANNITY: And you know, you are interesting to me because I found myself agreeing with you more this year than I think we ever have. And we've had heated battles together over the years.

HANNITY: Well, obviously, I thought you were going to weigh in on this. Did Obama have a bad year? Is this -- was this a collapse of his presidency?

KUCINICH: I don't know about a collapse. I mean, he still has another three years, so you can't talk about a collapse. He's in for three more years. The question is what about the country. What's happening here?

HANNITY: Did the American do that, or did Obama back away from his red line?

KUCINICH: This was an outcry that was happening. I have never seen numbers of unity among the people of this country saying, We don't want to do this. And it was reflected in Congress's position, too. So that was a big development.

HANNITY: But on the other hand, he went behind the backs of the Israelis and the Saudis and is making a deal and negotiating with Iran, who I don't trust, who I think are on their way to making a nuclear weapon because of him!

SCHOEN: ... the decline of America and a presidency that is failing. Around the world, we are losing respect, influence. You're right about Iran. There was a red line that was crossed. You look at what's happening in Ukraine now.

Bottom line, we are losing. The Russians and Chinese are winning. We're more divided than we've ever been before. Amy was exactly right about how the scandals have played out here. But around the world, we have become something of an impotent laughingstock.

HANNITY: All right, we're going to come back. Anyone else have anything to say?