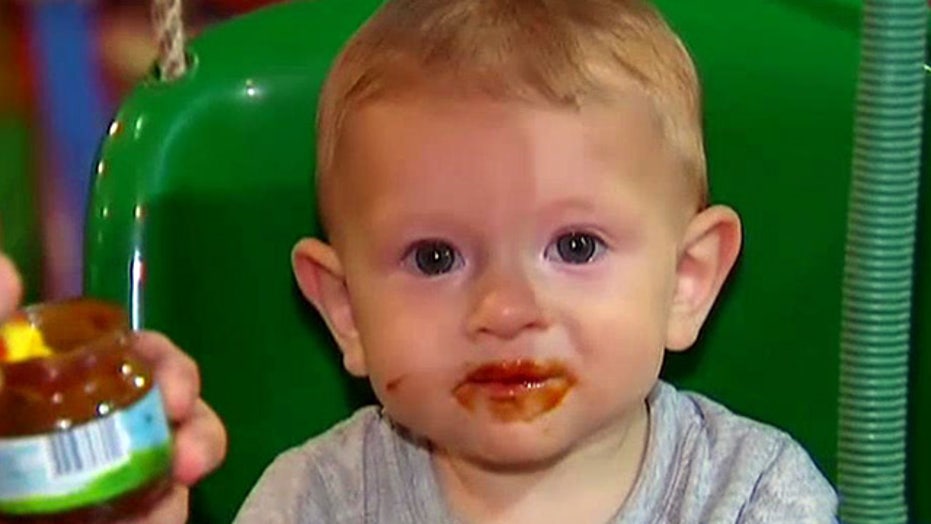 A look at how Gaza conflict is impacting Israeli children

This is a rush transcript from "Hannity," August 5, 2014. This copy may not be in its final form and may be updated.

SEAN HANNITY, HOST: And welcome back to "Hannity." We are on the ground in Israel, we are in Jerusalem tonight.

Now, with the constant fear of Hamas rockets being fired into the border city of Sderot -- well, it has been deemed too dangerous for any children to play outdoors. So back in 2009, when heavy fighting was taking place, well, the Jewish National Fund -- they built an indoor playground. And earlier today, I got an exclusive look at the recreation center, which also serves as a bomb shelter. And we talked to several parents and children who were there. Take a look at this.

HANNITY: This is a children's center that they built. Literally, they get as many as 800, 900 kids a day. They can't play outside, so this facility was built, bomb-proof.

SHAHAR HERMELIN, JEWISH NATIONAL FUND, USA: This is an area where kids need to go into an indoor secured facility just to be kids. Anywhere else in the world, you take it for granted that kids want to play, they go out and play. You cannot do that here.

HANNITY: No kid plays outside here.

HERMELIN: Well, they do, but even when you do go outside, you never know when the next rocket is going to come.

HANNITY: This facility was built specifically so they would have a place to be normal, be kids and play --

The story of this place begins in May 2008. We're already talking about seven years, more than seven years of shelling, kids -- no safe place in the area to play in. Secured indoor facility, one of a kind in the world. And when you walk outside today, you hear something that people in Sderot did not hear for almost a decade, the laughter of children playing. And that is not something you can take lightly here.

HERMELIN: And it wasn't designed to be a shelter to begin with.  This is an industrial building.

HERMELIN: Right here, the architect wanted to have a big merry-go-round, like the one you see in Disney World and big parks.

HERMELIN: Because it's the nicest thing. But then -- by the way, I think the merry-go-round was the very first thing the architect put on paper. But then the IDF came, and the IDF had to approve everything here.  And they saw the plans and they said, sorry, you cannot have a merry-go- round. And we said, Why? This is the nicest thing for a kid with the lights and the horses and music.

HANNITY: They can't get off.

HERMELIN: They said -- you're absolutely right. It's very nice.  There's only one problem. It takes 25 seconds to stop a merry-go-round.  You only have 15 seconds to run for cover.

HERMELIN: The only thing that matters in the JNF playground is that the kids will be safe in less than 15 seconds.

HANNITY: OK, here we go. What is that like for you, and life (ph) living with your children?

HANNITY: Why -- I know you say this is your home. Would you be better moving to another part of Israel?

HANNITY: What if you didn't --

UNIDENTIFIED FEMALE: And as we see, things are happening all over Israel.  You never know.

HANNITY: What if you didn't have this place for the kids because they can't play outside?

UNIDENTIFIED FEMALE: They don't play outside. We bought them things to play in the house, like a trampoline and things like that --

HANNITY: Do you have a bomb shelter at your house?

UNIDENTIFIED FEMALE: We have a bomb shelter. The little ones all sleep there --

HANNITY: You all sleep in the bomb shelter?

UNIDENTIFIED FEMALE:  -- so we don't have to wake them up in the middle of the night because the red alert, 15 seconds. You cannot -- two parents cannot wake up seven children.

HANNITY: Can't even sleep in your own bed.

HERMELIN: More than 75, 80 percent of those 8,500 children suffer from post-traumatic syndromes. Think of a kid who is 13, 14, 15 years old.  This is the only reality he knows. He was born into this era. He doesn't know any other realities, other than being on the alert 24/7. Try to think of a world or a reality where kids simply cannot go out and play as any other kids do anywhere else in the world.

HANNITY: What would you like the prime minister to do? I mean, if I was living and all these rockets are being fired at me, I'd want to fire rockets back. Do you feel you want revenge --

HANNITY: You want to -- the prime minister to eliminate this threat, period, finish the job.

UNIDENTIFIED FEMALE: We first need the world to understand what really is happening there, that they are killing their own children. They are causing the death of their people. I do not want people to die. The Palestinian families, I don't want them to get hurt, but if I have no choice and have to defend my own children, and they don't leave us any choice. If the world would understand then it would be easier for Israel just to kill Hamas.

UNIDENTIFIED FEMALE: I want the prime minister to come with his family to live here one week.