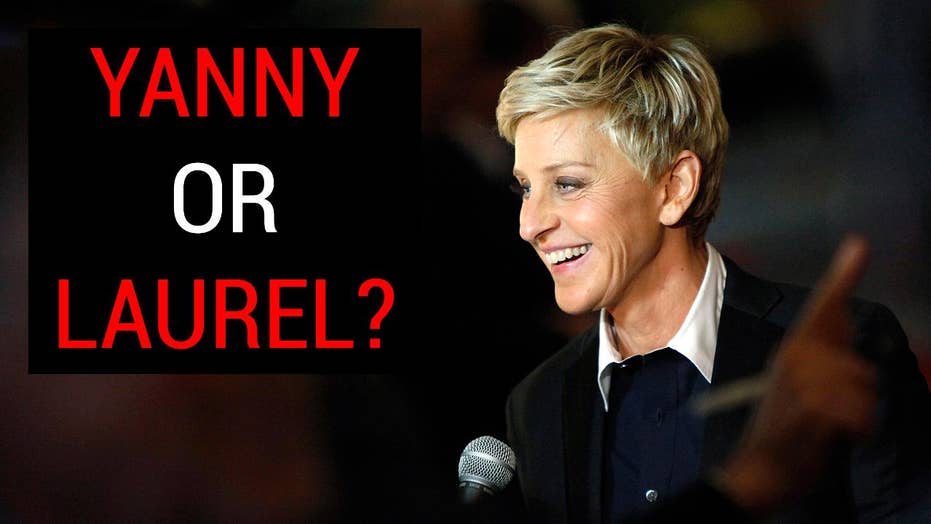 Celebs weigh in on Yanny vs. Laurel debate

Take a listen to the audio clip that’s dividing the internet and find out what celebrities are saying. Do you hear ‘Laurel’ or ‘Yanny’?

The hotly contested debate splitting the nation about whether an audio clip is saying “Yanny” or “Laurel” all reportedly started with a Georgia high school student just trying to study.

Flowery Branch High School freshman Katie Hetzel was prepping for her world literature course on Friday when she needed to learn the definition of “laurel,” she told tech magazine, Wired. She searched for the word on Vocabulary.com, but when she played the pronunciation recording, she thought she was actually hearing “yanny,” she said.

Before eventually sharing it on Instagram, Hetzel told the outlet that she played the baffling recording for some of her friends, but they “all heard mixed things.”

Another student, Fernando Castro, told Wired that he later shared the video on his own social media page and added the poll.

"She recorded it and put it on her story then I remade the video and posted it," Castro said. "Katie and I have been going back and forth and we both agree that we had equal credit on it."

The video then reportedly got added to Reddit by one of Castro’s friends, who goes by the username RolandCamry before it was seen by Twitter user Cloe Feldman. And from there, social media history was made.

Marc Tinkler, chief technology officer and co-founder of Vocabulary.com, told Wired that the widely disputed recording is actually audio of a real person saying the word, “laurel.” And that person, he said, “is a member of the original cast of CATS on Broadway.”

Tinkler told the outlet that upon starting the website, they “hired a bunch of opera singers to record 200,000 words,” because they needed people that could articulate words well and were able to read the International Phonetic Alphabet (IPA). Opera singers fit the bill, he said, as they need to be able to perform songs that are written in languages they may not be able to speak.

"We set [the singers] up with laptops with really great microphones in a DIY sound booth,” Tinkler told Wired. “They would just sit there and a word would appear on the screen and they would say it. They did this thousands of times."

Since the start of the internet craze, Vocabulary.com on Wednesday tweeted to “#TeamYanny,” saying that they “decided that #yanny needed its own definition.”

So now according to the website, the meaning of yanny is, “a word or phrase that is capable of distracting the entire internet for at least 24 hours.”

“When you ‘drop a yanny,’ you start a contentious debate on some type of public forum.”