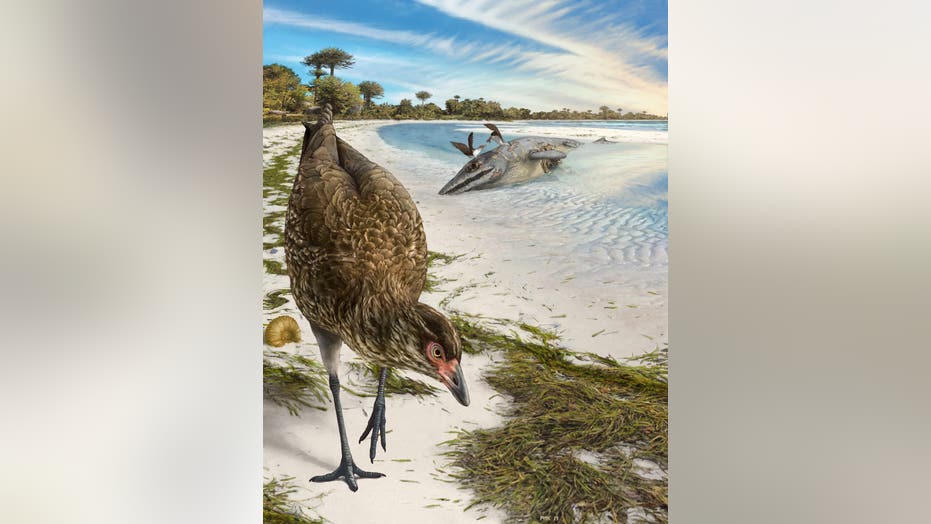 Researchers have discovered "wonderchicken," a 67-million-year-old fossilized bird they believe is the first "modern bird."

Known as Asterioornis, the bird was discovered in a limestone quarry near the Belgian-Dutch border. It lived during the Cretaceous period (along with dinosaurs) and had several features that are similar to modern-day chickens and duck-like birds, suggesting to researchers it may be close to or the last common ancestor of modern chickens and ducks.

"The moment I first saw what was beneath the rock was the most exciting moment of my scientific career," said the study's lead author, Dr. Daniel Field, in a statement. "This is one of the best-preserved fossil bird skulls of any age, from anywhere in the world. We almost had to pinch ourselves when we saw it, knowing that it was from such an important time in Earth's history."

Asteriornis is believed to have weighed just under 1 pound, based on its skull and a few small leg bone fragments. Experts believe that due to its diminutive stature, it likely lived near the shore.

“This fossil tells us that early on, at least some modern birds were fairly small-bodied, ground-dwelling birds that lived near the seashore,” Field explained. “Asteriornis now gives us a search image for future fossil discoveries — hopefully it ushers in a new era of fossil finds that help clarify how, when and where modern birds first evolved.”

Researchers looked at the nearly complete skull and dated it to 66.7 million years ago, almost 1 million years prior to the asteroid that hit the Earth and wiped out nearly 75 percent of all species.

One of the study's co-authors, Juan Benito, said finding the skull "blew my mind."

"Without these cutting-edge scans, we never would have known that we were holding the oldest modern bird skull in the world," Benito added, noting the ability to use CT scans helped their work tremendously.

"The ability to CT scan fossils -- like we can at the Cambridge Biotomography Centre -- has completely transformed how we study paleontology in the 21st century," Field added.

The researchers hope that "wonderchicken" will give new light into how birds first emerged, largely surviving the aforementioned asteroid, and how they became as diverse as they are today.

"The origins of living bird diversity are shrouded in mystery -- other than knowing that modern birds arose at some point towards the end of the age of dinosaurs, we have very little fossil evidence of them until after the asteroid hit," said the study's co-author Albert Chen, in the statement. "This fossil provides our earliest direct glimpse of what modern birds were like during the initial stages of their evolutionary history."

The researchers published their findings in the scientific journal Nature.