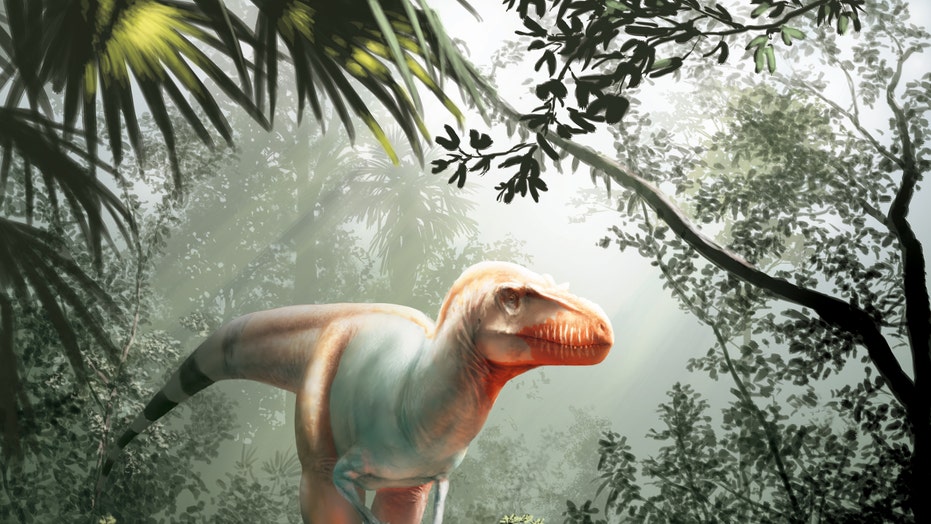 Paleontologists discovered a new species of tyrannosaur that roamed the earth 79.5 million years ago, after identifying a fossil uncovered in Canada.

Known as Thanatotheristes degrootorum, the species is one of the oldest ever found in North America and is directly linked to Tyrannosaurus rex, researchers said on Monday.

The name alludes to the dinosaur's role as a fearsome apex predator and was apparently inspired by Thanatos, the Greek god of death, and theristes (one who reaps or harvests).

ANCIENT EGYPTIAN 'BOARD GAME OF DEATH' IDENTIFIED BY SCIENTISTS

Researchers have only two skulls from this new species, but here is what the dinosaur may have looked like nearly 80 million years ago.  (Julius Csotonyi)

Tyrannosaurs were large predatory dinosaurs that lived tens of millions of years ago.

“Thanatotheristes can be distinguished from all other tyrannosaurs by numerous characteristics of the skull, but the most prominent are vertical ridges that run the length of the upper jaw,” said Jared Voris, a University of Calgary Ph.D. student and lead author of the study, in a press statement.

This new species was 26 to 30 feet long and weighed about 2 tons as a full-grown adult, according to scientists.

John De Groot found the fossil skull fragments while hiking near his farm near Hays, Alberta.

A new species of tyrannosaurus was found in Canada. (Julius Csotonyi)

“We are thrilled to announce the first new species of tyrannosaur to be discovered in Canada in 50 years," said François Therrien, curator of dinosaur palaeoecology at the Royal Tyrrell Museum, in a statement. "This discovery is significant because it fills in a gap in our understanding of tyrannosaur evolution.”