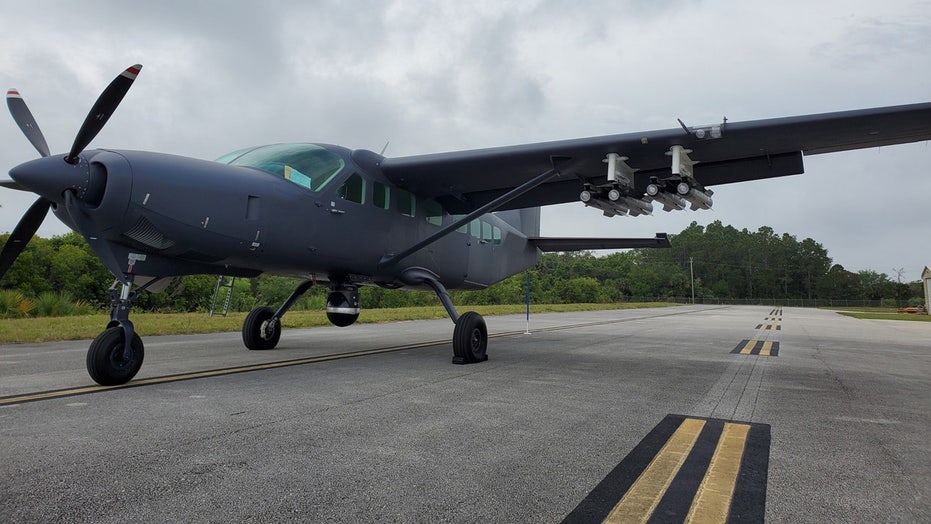 If overhead fire support is able to identify and attack pockets of enemy fighters, fewer ground troops have to enter into enemy fire. Also, an overhead asset of this kind can be an intelligence node able to send targeting information and data regarding troop movements. When it comes to actual close-in counterinsurgency combat, fighters often obscure themselves in defilade or in buildings, requiring a need for precision strikes. Air to ground precision weapons can use a laser rangefinder and other kinds of advanced technologies.

One plane now operating is MAG Aerospace’s MC-208 Armed Caravan, a converted surveillance aircraft already in service with SOCOM and another in production for a U.S. allied international force. The Aircraft consists of a Textron-built airframe and MAG-integrated sensors, communications, avionics and weapons systems.

Image courtesy of the U.S. Army

MAG’s armed surveillance aircraft is intended to meet a particular need because it can operate in close-in, nearly immediate coordination with the units it supports. Air attack or readily available surveillance, for instance, will not need to be called upon from less accessible fixed-runway-reliant aircraft. F-22s, F-16s, A-10s and even F-35s can be used for close-air-support, however they require a fixed, hard runway and are therefore less able to take off and land in rugged, uneven terrain in close proximity to SOF units on the ground. Also, the Pentagon seeks a produceable, less expensive aircraft that can perform these missions, freeing up 5th generation and other fixed-wing aircraft for operations in less permissive environments where air supremacy needs to be established -- such as enemy territory armed with advanced air defenses or fighter jets.

“There are plenty of countries that have an extremist threat -- the Middle East and South and Central Africa. SOCOM (Special Operations Command) is asking for this (armed surveillance planes) for Nigeria, Somalia and Libya. It is a perfect platform for where we are fighting,” Florida Congressman Rep. Michael Waltz told Warrior in an interview several months ago.

MAGs Armed Caravan is also being offered as part of a new SOCOM search to broadly acquire an “Armed Overwatch” attack aircraft. SOCOM is pursuing a phased strategy to develop this aircraft, the first phase of which includes MAG’s  MC-208 Multi-Role Armed Caravan from MAG Aerospace and other offerings from industry competitors…including L3’s AT-802 Longsword, Leidos, Paramount USA and Vertex Aerospace’s Bronco II Aircraft, Orbital ATKs AC-208 Eliminator. At the moment, the respective industry bidders have submitted White Papers as part of a broader SOCOM trajectory leading to an eventual flight demonstration of the aircraft.

Each of the competitors is offering various aircraft, sensor and weapons integration possibilities in an effort to meet SOCOM’s sought-after requirements.  MAG Aerospace’s Caravan offering, for instance, seeks to capitalize upon a combat-tested, ready-to-produce variant of its now in-service Cessna C-208 ISR light aircraft. The MAG surveillance and missionized aircraft have been supporting U.S. allies’ operations in Uganda, Kenya, Niger, Chad, Cameroon, Philippines, Jordan, Honduras, Guatemala and other countries. Its new MC-208 Caravan involves a weaponized adaptation of the now operational aircraft.

“We are building this with a platform that is in production with a pedigree that goes back many years. With this we don’t have to prove out that our aircraft can be supported, as it has over 20 million flight hours,” Wells said.

The MC-208 Caravan can be armed with up to eight Hellfire missiles and as many as 28 Advanced Precision Kill Weapons Systems (APKWS) laser-guided rockets for smaller targets. MAG developers emphasize that its offering is specifically configured to quickly adapt its sensors and weapons to various mission requirements such as those needed for casualty evacuation, direct attack or maneuvering surveillance operations. APKWS Hydra 70 Folding Fin Rockets can either lay down suppressive fire to enable troop movement or pinpoint exact targets with laser designation.

“Within a matter of hours we can reconfigure the aircraft for whatever is required by the user,” Wells said.