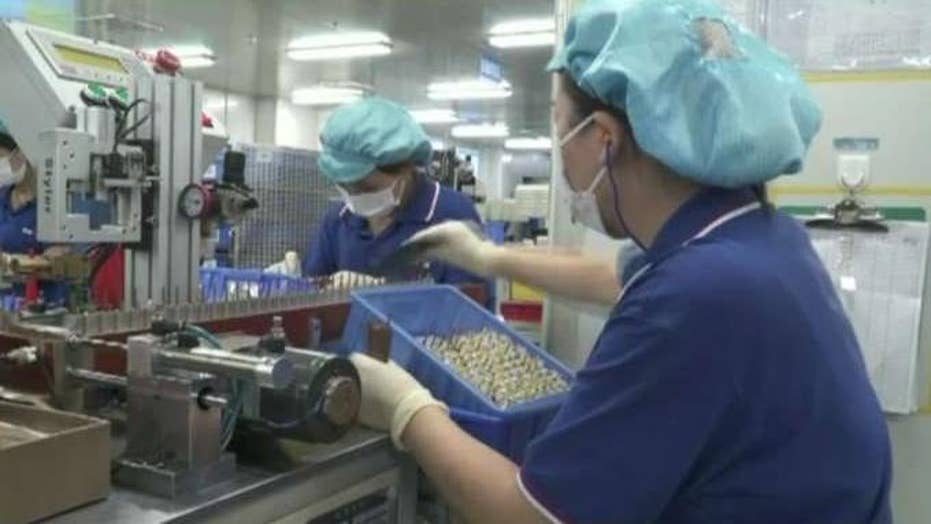 The Trump administration needs to be doing more to protect against the theft of American intellectual property by the Chinese government, according to a bipartisan commission of experts that estimated the cost to U.S. companies at $225-$600 billion per year, if not more.

It's not exactly an issue that's on the back-burner. After President Trump and Chinese leader Xi Jinping announced a temporary ceasefire in an escalating trade war, a March 1 deadline was set for negotiations to conclude. Unfortunately, the agency tasked by the president with handling the ongoing trade talks was forced to operate with only 30 percent of its staff due to the partial government shutdown that stretched on for more than a month.

The office of the U.S. Trade Representative said in a statement earlier this month that during the shutdown, "excepted personnel [would] ensure USTR continues to conduct operations, including trade negotiations." A USTR representative declined to comment to Fox News, but President Trump's economic advisor Larry Kudlow recently said "we're making progress," including on the issue of IP.

— Commission on the Theft of American Intellectual Property

If that is actually the case, it would represent a quick turnaround on an issue that has been a priority for the greater part of a decade, and across multiple administrations. Though the Chinese government has announced a plan for new penalties on those who steal IP, it was as recently as November 2018, just before negotiations were announced, that the USTR concluded, "China shows no sign of ceasing its policy and practice of conducting and supporting cyberenabled theft and intrusions into the commercial networks of U.S. companies... [and] China’s cyberenabled theft against the United States has increased in frequency and sophistication."

Shortly after that announcement, in late-December 2018, the FBI and Justice Department charged two Chinese nationals with an alleged plot to steal business secrets from 45 countries around the world and in the U.S. The hackers, who were allegedly directed by the Chinese Government, also accessed the personal information of 100,000 U.S. Navy personnel, officials said.

On Monday, the Justice Department unsealed criminal charges against Chinese tech giant Huawei, two of its subsidiaries and a top executive, who are accused of misleading banks about the company's business and violating U.S. sanctions. The company is also charged in a separate case with stealing trade secrets from T-Mobile, according to federal prosecutors.

The spokesperson for China’s foreign ministry denied involvement, described the accusation as “vile” and insisted, “the Chinese government has never participated in or supported others in stealing commercial secrets in any form.”

In an email to Fox News, a representative for the Commission on the Theft of American Intellectual Property (IP Commission) said that kind of response from China came as "no surprise" given the country's past history on the matter.

"The Chinese leadership might suggest that this is simply a case of business leaders not heeding official guidance," the IP Commission said. "But given the close cooperation between China’s intelligence services and state-owned enterprises on the acquisition of IP, this answer rings hollow."

It was the IP Commission that put the price tag of Chinese IP theft at $225-600 billion annually in a frequently cited 2017 report. A few months after that report was published, President Trump ordered the office of the U.S. Trade Representative to start investigating the issue.

Hacking isn’t the only way that American businesses have been hurt by Chinese intellectual property theft. Last year, a U.S. court imposed the maximum fine on a Chinese manufacturer of wind turbines that had stolen IP from an American company in a plot that reads like a Hollywood movie script. American Superconductor (AMSC) was forced to lay off some 700 employees and lost over $1 billion after an overseas employee was bribed by Chinese actors with promises of money, women and an apartment in Beijing.

Wind turbines generating electricity at a wind farm in Xinzhou, China, in 2012. Chinese turbine manufacturer Sinovel was hit with the maximum penalty in 2018 after being found guilty of stealing plans from American Superconductor, a U.S. business that was forced to lay off hundreds of employees as a result. (Associated Press/Cai Zengle, File)

Critics have argued the outrage over these technology transfers is sometimes overstated, and that the actual costs have been overestimated. However, the USTR has pointed to a 2018 report from the American Chamber of Commerce in Shanghai that suggested it’s not how much data is being transferred - but what kind. The report described particular pressure on companies working with “strategically important technology,” such as aerospace and chemical companies. More than 40 percent of companies in both of those arenas “reported facing ‘notable’ pressure to transfer technology,” the report stated.

"Our previous negotiations with China have all been failures. Making this bigger doesn't make it any better, it just makes it a bigger failure."

While the IP Commission applauded many of the steps the Trump administration has taken to tackle the issue, "more remains to be done," and 90 days worth of negotiations may not cut it. "This is the work of years, not 90 days," the commission said, "but it is work that must start now."

In describing the ongoing negotiations to reporters, the president's economic advisor characterized them as talks "on the grandest scale between the two countries ever." Derek Scissors, resident scholar at the American Enterprise Institute and author of "China Global Investment Tracker," recently told Fox News' Dana Perino that this kind of grand approach may not necessarily be the key to success.

"Our previous negotiations with China have all been failures," Scissors said on "The Daily Briefing." "Making this bigger doesn't make it any better, it just makes it a bigger failure," he added.