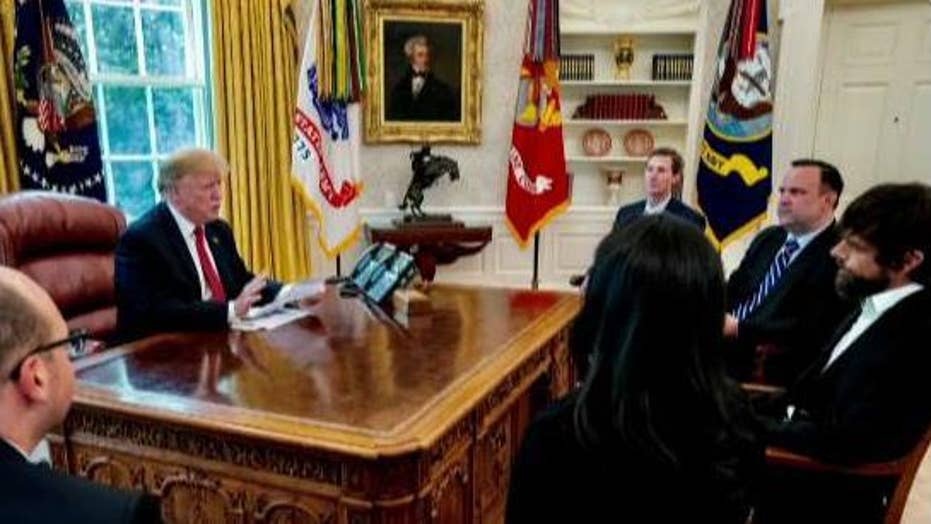 Social media giant Twitter has been a frequent target of President Trump's wrath, but is also a primary communication tool for him.

President Donald Trump met with Twitter CEO Jack Dorsey at the White House Tuesday to discuss the social media giant, which he has often accused of political bias.

Citing an internal Twitter email, Motherboard reported Tuesday that Dorsey was set to have a 30-minute closed-door meeting with the president. The meeting, which was at the invitation of the White House, would discuss “the health of the public conversation on Twitter,” the email said.

TRUMP SLAMS FACEBOOK, GOOGLE, TWITTER, SAYS TECH GIANTS ARE 'ON THE SIDE OF THE RADICAL LEFT DEMOCRATS'

“Great meeting this afternoon at the @WhiteHouse with @Jack from @Twitter. Lots of subjects discussed regarding their platform, and the world of social media in general. Look forward to keeping an open dialogue!” Trump tweeted late Tuesday afternoon, with a photo of the meeting.

“Jack had a constructive meeting with the President of the United States today at the president’s invitation,” a Twitter spokeswoman told Fox News, via email. “They discussed Twitter’s commitment to protecting the health of the public conversation ahead of the 2020 U.S. elections and efforts underway to respond to the opioid crisis."

Twitter and other tech giants such as Facebook and Google have been high-profile targets of the president, who repeatedly has accused them of anti-conservative bias.

Just hours before meeting Dorsey, Trump complained in a tweet that Twitter doesn’t “treat me well as a Republican,” adding that the platform is “very discriminatory.”

Trump, however, remains an avid user of Twitter and harnessed the platform to great effect during the 2016 presidential election campaign.