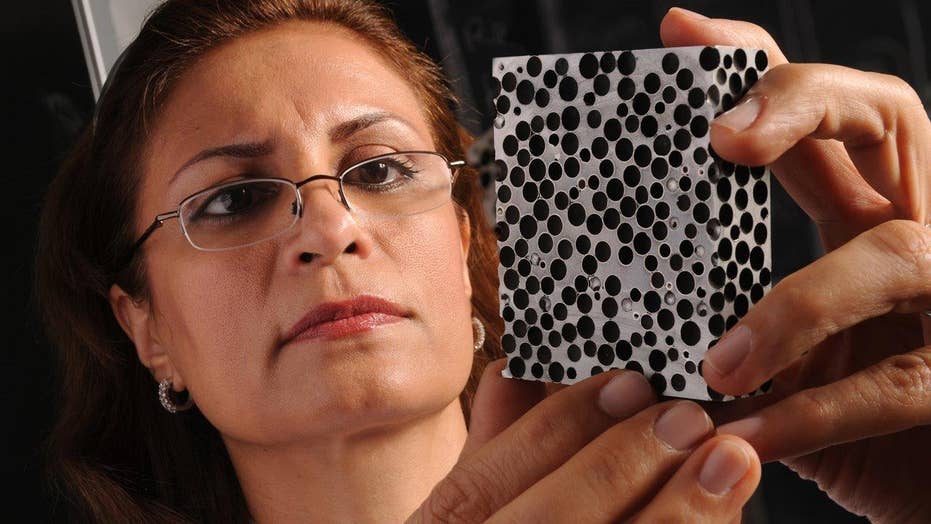 Foam body armor? Even armor-piercing bullets cannot get through this foam.

This is not ordinary foam like the kind used for shaving, for example. This is a special type of foam called composite metal foams, or CMF.

The military and law enforcement could use this kind of foam for advanced, ultra light body armor to protect personnel.

And this research team has other foams up its sleeve that have the potential to keep military and first responders safe from radiation and extreme heat too.

In tests conducted by the development team, the foam body armor was able to defeat an armor-piercing bullet. And on impact, their foam smashed the bullet into powder.

To challenge the foam material with bullets, the team built a shield. The strike face - the side facing the weapon - was made with the new composite metal foam together with boron carbide ceramics. The backplates – the side that would face the user - were made of Kevlar.

How well did it work?

The foam worked so well that an armor-piercing round could only penetrate less than an inch on the weapon-facing side of the shield.

On the side facing the warfighter’s body, the bullet was only able to cause an 8 mm indentation on the back .

Body armor innovation is important because it can save lives.

The National Institute of Justice standard allows up to 44 mm indentation from a bullet on side facing the user– so the foam performs  80 percent better than the maximum standard.

HOW IS IT MADE?

In basic terms, the foam is a composite metal foam. What does that mean?

To make it, the team takes molten metal and bubbles gas through it. This process creates a sort of froth. When the froth cools, it becomes a lightweight, ultra strong matrix material.

Processes like 3D printing and milling can also be used to make composite metal foam.

The team first produced a foam shield that could block radiation.

This foam is able to stop and block X-rays. In tests, it can even protect against various forms of gamma rays.

According to NASA, gamma rays are produced by the hottest and most energetic objects in the universe like supernova explosions and areas around black holes. Here on Earth, they can also be produced in nuclear fission.

In tests, the foam could also protect against neutron radiation that can be produced by nuclear fission or fusion.

To develop radiation shielding, the team created a “high-Z steel-steel foam”. This one is a combination of stainless steel with a small amount of tungsten shaped into hollow spheres. This is then introduced into the steel matrix and creates the foam.

Current protection options tend to be very cumbersome, awkward and heavy. The foam shielding could provide a lightweight, strong alternative for the military. It could also have potential for transportation and storage of hazardous materials.

Space exploration and transportation of nuclear waste are just two other examples of how this foam could be used.

The Department of Energy Office of Nuclear Energy supported the team’s development of foam that is two times better at protecting against fire and heat as regular metal.

To examine the foam’s heat protection, the team tested some of the foam that was 0.75 inches thick against 800 degrees Celsius fire for 30 minutes. And they tested a regular piece of stainless steel the same size and width against the same heat.

Which resisted the heat better? The foam. The foam withstood the heat twice as long.

It took four minutes for the extreme heat to reach the other side of the regular stainless steel from the fire. The team’s foam withstood the heat for eight minutes before it reached the other end.

Being able to withstand heat longer could provide a number of advantages. For example, it could mean the difference between an accident causing an explosion – or not.

Foam like this could also be leveraged by the military to safely transport and store explosives. It could even be used for the safekeeping and transfer of nuclear and other hazardous materials.

Go inside dangerous missions and hear firsthand from American Special Operations warriors about how they have used advanced body armor in combat on Tactical Talk.