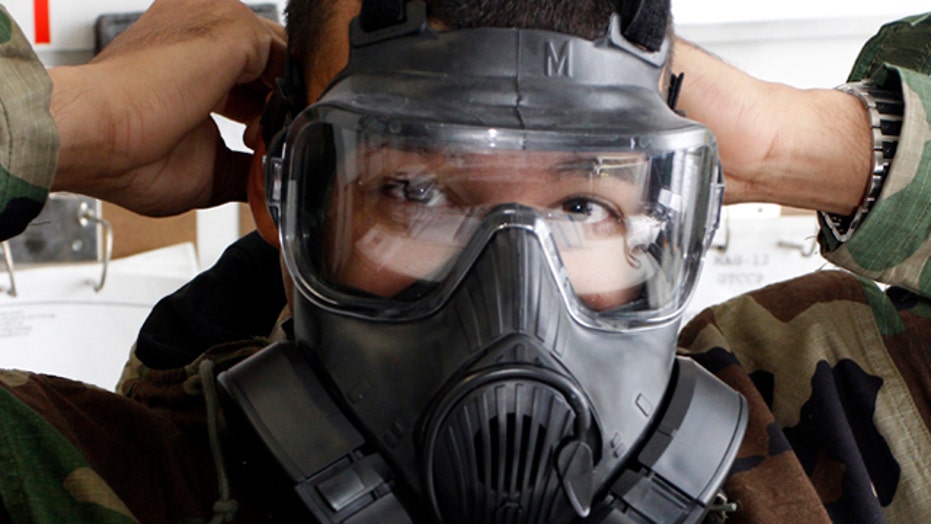 War Games: Tech to defend US forces against chemical weapons

Securing chemical weapons depots in Syria will likely require forces on the ground -- and if the U.S. ends up doing the heavy lifting, American troops may be at risk from them.

The U.S. government believes Syrian President Bashar al-Assad used the deadly nerve sarin against his own people on Syrian soil, killing more than 1,400. Even a fraction of an ounce of sarin -- a mere 1 to 10 milliliters -- on the skin can be fatal.

Known by the military designation GB, sarin is a clear, colorless, undetectable nerve agent. One of the most toxic such weapons, it is potentially fatal within minutes.

Treaties and agreements prohibit the use of chemical and biological weapons, yet they clearly remain a threat. So the Department of Defense and the U.S. Army Medical Research Institute of Infectious Diseases (USAMRIID) continue work on

counter-measures, from a promising nerve-agent hunter to a protective lotion.

Before heading in, take this pill …
The DoD is developing a cutting-edge nerve agent hunter called Bioscavenger to be taken before deploying into a chemical warfare risk zone. This prophylactic would defend against exposure to a range of nerve agents and protect the warfighter from death and toxic effects.

And this unprecedented protection in a pill is not too far off. In April, PharmAthene announced its version of the recombinant butyrylcholinesterase (rBChE) bioscavenger successfully targeted and bound itself to a number of nerve agents in vitro, including sarin.

BChE, a natural protein found in tiny quantities in blood, works in the body to absorb toxins like nerve agents before they cause irreversible neurological damage.

Bioscavenger is produced in the milk of transgenic goats; scientists aim to get another version of Bioscavenger approved by the FDA in 2018 and available the following year.

Bioscavenger III is also underway and will hopefully transition to advanced development in 2020.

… and put this gear on
The gear warfighters would need to don in a chemical warfare scenario is familiar from TV and movies. When the highest level of protection is required, warfighters adopt Mission Oriented Protective Posture (MOPP) level 4.

At this level, personnel wear an overgarment, gloves, footwear covers, protective mask, and protective helmet cover. Steps are taken to ensure all their drawstrings are tightly pulled to reduce the risk of any openings and exposure. But what else can U.S. forces use downrange?

Skin Cream: To further prevent or delay chemical warfare agent from penetrating to the skin, a warfighter can apply a “paste.”

Skin Exposure Reduction Paste Against Chemical Warfare Agents is a skin cream that creates a film barrier. Before suiting up, a warfighter would apply it for added protection, paying particular attention to protective suit closure points like the neck, wrists and ankles.

It should also be especially applied to areas like the back of knees, since blister agents can be more effective with sweat.

Antidote Kits: After exposure to sarin, there are a number of antidote options.

The Mark I Nerve Agent Antidote Kit includes the nerve agent antidote atropine. It’s been rolled out beyond the military and adopted by civilians as well, such as Emergency Medical Services in New York and Florida.

Many experts believe the Antidote Treatment Nerve Agent Autoinjector (ATNAA) is an improvement over the Mark I. To survive an otherwise lethal exposure, a warfighter can use the autoinjector to sequentially deliver atropine and 2­PAM through a single needle.

Skin and wound decontamination
What happens if the skin still becomes exposed, in spite of protective measures?

For a warfighter exposed to a nerve agent, methods to decontaminate skin and wounds would improve the chance of survival. One uses activated charcoal to absorb the chemical agent, another is an individually carried skin decontamination kit.

The lotion in the second option is superior for reducing the lethal and toxic effects of chemical warfare agents. Rather than removing the chemical threat, it works by neutralizing it.

To decontaminate, a warfighter just needs to use the lotion on the applicator sponge. It decontaminates all the known chemical warfare agents in less than 2 minutes and leaves a non-toxic residue on the skin.

It can also be used to decontaminate weapons and equipment.

Nerve agent exposure can cause seizures and convulsions in warfighters.

To reduce these seizures, the military currently fields CANA, or Convulsant Antidote for Nerve Agents. But a newer system will treat seizures and prevent subsequent brain damage caused by nerve agent exposure.

Injected intramuscularly, it contains the drug midazolam instead of the diazepam used in CANA.

Researchers say it will stop nerve agent seizures more rapidly -- they hope it will be FDA approved next year.