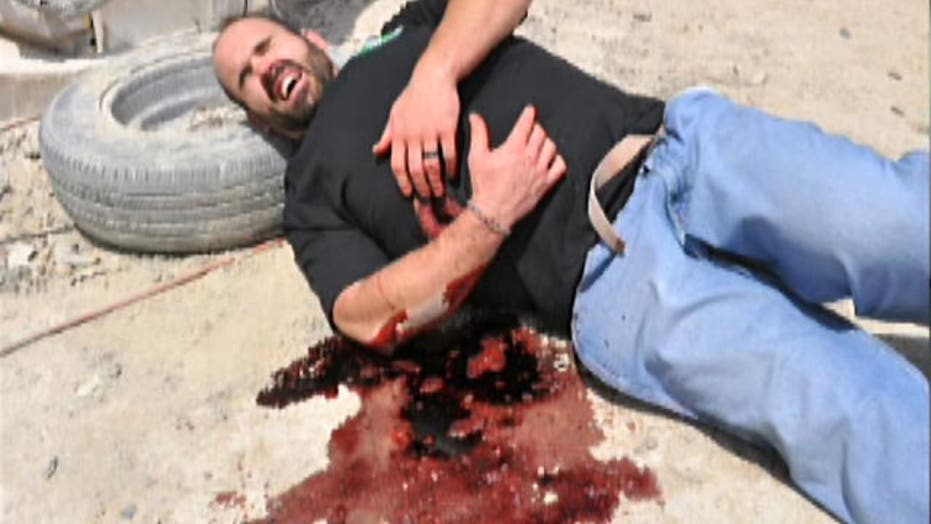 So could there be a better place to train medical personnel than Hollywood?

Second-year students from Rocky Vista University’s College of Osteopathic Medicine have been training for life-or death emergencies this week with staff from Balboa Naval Hospital.

Research shows soldiers have a higher rate of casualties in their first few combat missions, and it is believed the rate can be lowered by reducing the fear of the unknown and unexpected.

So cue the fake blood. Students taking the Intensive Surgical Skills course practice in realistic environments, including a hospital with emergency and surgery rooms. Simulating actual emergencies, “wounded” role players display pain, fear, hysteria and confusion and they provide misinformation, giving the students a chance to experience the stress of combat trauma care.

Last week, three Americans, including a Chicago pediatrician, were shot dead at a hospital in Kabul. So on Monday, Strategic Operations began this week’s course with a session designed for that sort of scenario: an active shooter in a hospital.

On Tuesday, there was a simulated MedCap (Medical Civic Action Program) visit to an Afghan village, where a team of doctors was ambushed with IEDs and an RPG attack. Later in the day, they grappled with multiple casualties from a downed helicopter.

On Thursday, the Federal Fire Department, San Diego Police Department and the San Diego SWAT team were to join the medical students in responding to a car accident, complete with explosions and smoke and multiple injuries.

The “Cut Suits” help doctors and first responders learn how to perform procedures on victims at the point of injury, how to hone treatment en route to a hospital or medical outpost and how to intervene surgically when necessary.​

The students have to contend with realistic head wounds, penetrating chest wounds, burns and shrapnel. And they have to do it in realistic combat conditions – under AK-47 and RPG fire – that are replicated by Strategic Operations.

Makeup artists create combat wounds that bleed actively from hidden tubes and stop only when a tourniquet is properly applied. If compression is ineffective, the bleeding continues.

A self-contained Blood Pumping System, worn and controlled by a player, can deliver four simultaneous three-liter arterial and venous bleeds. It is designed to help participants master hemorrhaging risks, which is critical because uncontrolled hemorrhaging plays a serious role in patient survivability.

Participants also may wear uniforms, body armor and equipment over a 20-pound Tactical Combat Casualty Care system designed to teach medics how to deal with the three primary causes of death on the battlefield.

“In medical training, the result is that the first exposure to real-world trauma proves to be no worse than the last hyper-realistic simulation,” Lavell says. “Hyper-realistic training saves lives.”