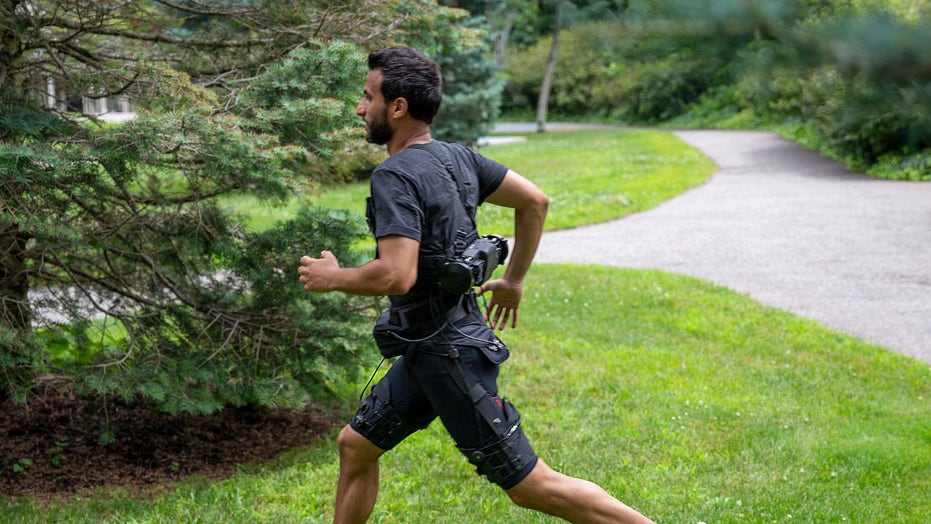 Scientists have developed a revolutionary new lightweight exosuit that can boost walking and running.

The high-tech suit, which potentially could be worn by first responders like firefighters and rescue workers navigating challenging terrain, weighs 11 pounds and is made of textile components that attach to a user's waist and thighs.

"This breakthrough study gives us a glimpse into a future where wearable robotic devices can improve the lives of the healthy, as well as serve those with injuries or in need of rehabilitation," Donald Ingber, of the Wyss Institute for Biologically Inspired Engineering at Harvard University, told SWNS.

The suit is controlled by an algorithm that can detect whether the person is walking or running, and it's apparently the first machine of its kind that assists with both.

FUTURISTIC FLYING CAR HOVERS ABOVE THE GROUND FOR ABOUT A MINUTE

The researchers also believe the exosuit could improve the mobility and quality of life for elderly people and those suffering from neurodegenerative disorders.

Professor Conor Walsh, also of the Wyss Institute and the study's lead, said: "We were excited to see the device also performed well during uphill walking, at different running speeds and during overground testing outside, which showed the versatility of the system."

On indoor treadmill tests, the suit reduced users' metabolic rates of walking and running by an average of 9.3 percent and 4 percent, according to SWNS.

"While the metabolic reductions we found are modest, our study demonstrates that it is possible to have a portable wearable robot assist more than just a single activity, helping to pave the way for these systems to become ubiquitous in our lives."