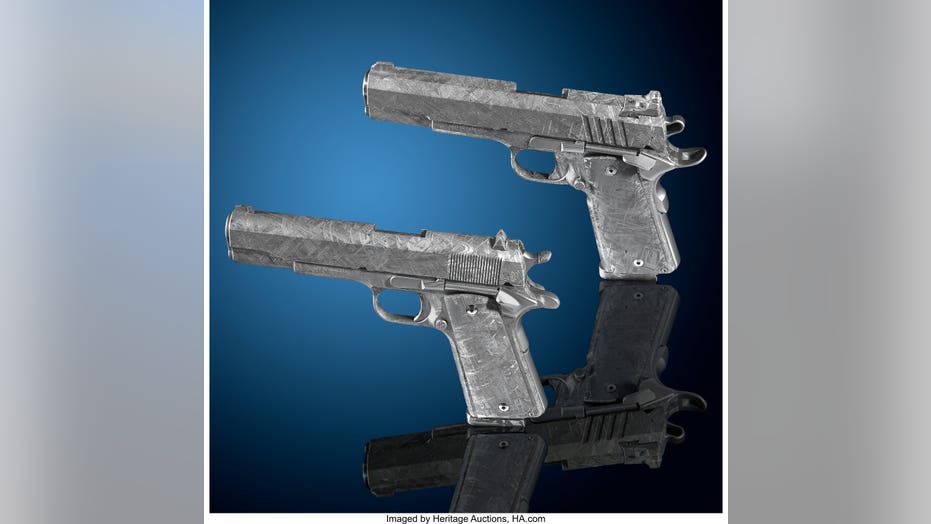 Two pistols made from a 4.5 billion-year-old meteorite could fetch $1.5 million when they are auctioned later this month.

Constructed from part of the Muonionalusta Meteorite, which was discovered in Sweden in 1906, the working .45 caliber pistols offer an unusual take on the classic 1911 handgun design. Experts believe that the meteorite slammed into Earth about 1 million years ago, although the meteorite itself is thought to date back some 4.5 billion years.

Dallas-based auction house Heritage Auctions will be selling the pistols, either individually or as a set, at an auction on July 20.

“The majority of the metal in these guns is meteorite,” Craig Kissick, director of science and nature at Heritage Auctions, told Fox News, noting that the pre-sale estimate for the set is $1 million to $1.5 million.

The pistols are made from a 4.5 billion-year-old meteorite. (Heritage Auctions)

Individually, the pre-sale estimate for each handgun starts at $500,000.

Kissick explained that the pistols are modeled after the famous Colt 1911 pistol, noting that the M1911 was the preferred handgun of the U.S. military from 1911 through 1968. “It really has no peer in terms of being the classic American handgun,” he said.

The right-handed pistols are not identical. One is a GI model and the other is custom model, according to Heritage Auctions.

One of the pistols fashioned from meteorite. (Heritage Auctions)

Constructing a gun out of meteorite was a new experience for gunsmith Lou Biondo of Business End Customs, who was commissioned to build the unusual weapons. “The client was referred to me by somebody else - I have never worked with this material before, so it was something that intrigued me,” he told Fox News. “I was supplied with the raw material that looked like a rock – it was something very, very cool.”

Biondo explained that he had to be extremely careful when he was cutting through the chunk of meteorite. “It was definitely one of those jobs where you had to go by feel and sound,” he said. “If you mix carbon steel, aluminum, stainless steel and throw in some diamonds, that’s what it felt like."

3 MILLION-YEAR-OLD COMET PIECE FOUND INSIDE A METEORITE, COULD CONTAIN BUILDING BLOCKS OF LIFE

The gunsmith added that, while there are no actual diamonds in the meteorite, there are “diamond-like inclusions,” in the material the guns were fashioned from. While the cutter went through some parts of the meteorite fairly easily, there were other parts that were more difficult. "I actually broke a couple of cutters,” he told Fox News.

The unusual weapons have already been test-fired. “I had to make sure that these guys actually work, as a safety aspect,” Biondo said. “I test-fired both pistols and they were fun to shoot, but knowing the price tag, I stopped!”

The pistols have fired 35 rounds each, according to Heritage Auctions.

July 20 marks the 50th anniversary of the Apollo 11 Moon landing.

A number of meteorite fragments will also be offered by Heritage Auctions in their Nature and Science auction on July 20.