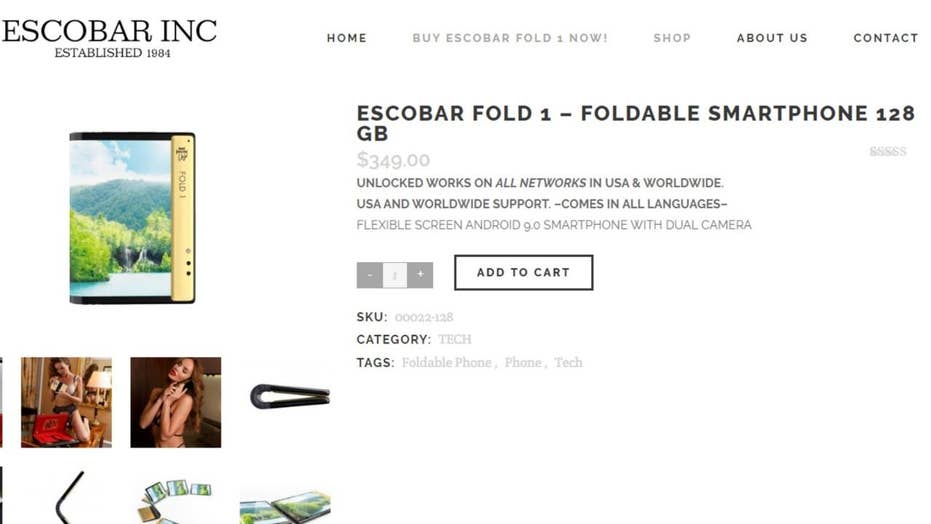 Pablo Escobar's brother, Roberto, made an 'unbreakable' smartphone and is claiming it will outsell the iPhone.

The brother of drug kingpin Pablo Escobar is turning his attention from accounting to Apple.

Roberto Escobar, the former accountant for the Medellín Cartel has created a smartphone, the Escobar Fold 1, that he believes will replace the iPhone.

In an interview with Digital Trends, Escobar claims he will beat Apple – which does not presently offer a foldable device  – with the new phone. It sells for $349 and comes with free shipping and a complimentary cover.

“I have told many people that I would beat Apple and I will," Escobar told the news outlet. "I cut the networks and retailers, to sell to customers phones that can fold for only $349, phones which in stores cost thousands of dollars by Samsung and others. This is my goal, to beat Apple, and by doing it myself like I always have.”

The smartphone is "always ready to fold" and it will be easy to turn it into a tablet, Escobar Inc., the company now run by Roberto, says in a description on its website.

In one of the marketing videos posted to Escobar Inc.'s website, a voice specifically calls out Apple co-founder Steve Jobs. “Apple Boy Steve once looked into space,” a voice is heard saying. “He saw Pablo Escobar with a phone beyond anybody’s imagination.”

In addition to claiming he will "beat Apple," Roberto is using several scantily clad women, described as "Escobar girls," both in videos and images on the website, to market the device.

Unlike the Samsung Galaxy Fold, which initially had issues with the glass breaking, Escobar says his phone is unbreakable.

“My phone cannot break, because I did not have to make a glass screen like Samsung,” Escobar told Digital Trends. “Our screen is made of a special type of plastic, and we still have the best resolution. Our special plastic is very difficult to break.”

Escobar, who claimed the cartel spent $2,500 a month just on rubber bands for its money and was imprisoned for his role in his brother's drug operations, said the phone will also have "special security" features.

“Folding is nice, but also, we have special security on the phone," he added. "This makes it very difficult for anyone to scan the phone both [for] near-person communications like Bluetooth, and also for governments to access the devices. I will not say that it is 100 percent secure, but what I will say is that all other phones like Apple and Samsung are 100 percent open to all governments in the world. We are not."

He continued: "Also, the cover that comes with all phones has a thin layer of metal that blocks RFID and other communications. This is a lot of phone for a small price, but this is, like I say, thanks to us selling direct to customers without any middlemen.”

In 2016, Apple was caught up in a fight with the FBI over a shooting in San Bernandino, Calif., when the FBI requested Apple's help to unlock the gunman's iPhone. Apple worked with the agency to a point, until it deemed the FBI's request to build a backdoor to the iPhone "too dangerous to create." In 2018, the Department of Justice concluded that the FBI inadvertently misled Congress that it had gone through every possible attempt to access the iPhone used by one of the people responsible for the San Bernardino terror attacks.

Earlier this year, Apple CEO Tim Cook said the San Bernardino case was "very rigged" and that he wished it had gone to court because the facts showed that the government acted in a "very dishonest manner" toward the Cupertino, Calif.-based technology company.