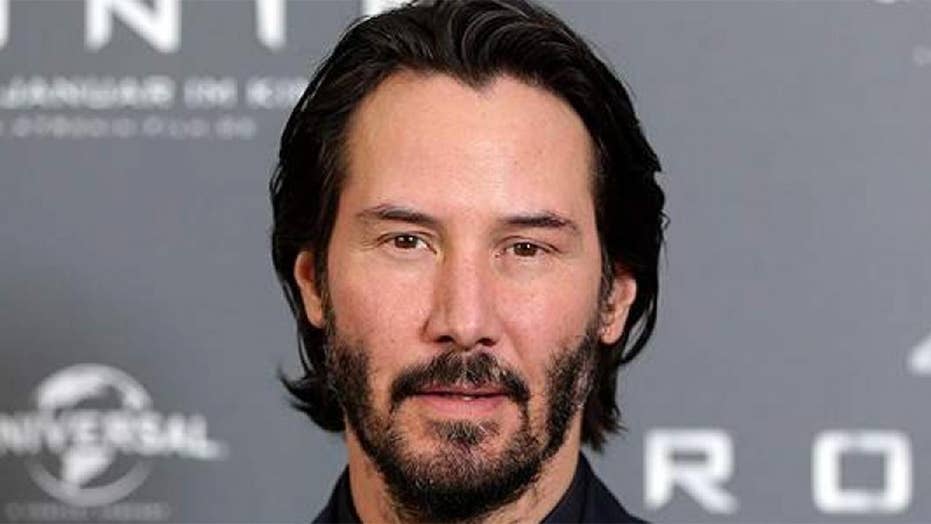 Top Talkers: Reeves and Winter announce filming of the third installment of 'Bill and Ted'; a new trailer for season 3 of 'Stranger Things' hits the web.

"John Wick" star Keanu Reeves once again took fans' breath away — but this time, it wasn't during one of his action-packed films.

The 54-year-old actor made a surprise appearance at Xbox's E3 event on Sunday to announce his role in the upcoming "Cyberpunk 2077" video game. Microsoft invited Reeves to the Los Angeles event, known as the Electronic Entertainment Expo, to reveal the April 16, 2020 release date for the role-playing video game.

The crowd erupted in cheers as Reeves emerged on stage amongst a cloud of smoke to promote the game.

The star then quieted the crowd to share an announcement. A while back, Reeves said he was asked by video game publisher CD Projekt Red to be a part of their upcoming project.

"They were going on and on about how they'd create this vast, open world with a branching storyline. How you'd be able to customize your character by in-game choices," Reeves explained. "And it's not something I knew before, but I was excited by. And I'm always drawn to fascinating stories."

Reeves continued to describe the futuristic game, which he said is set in the "sleazy, underbelly of the city." The actor confirmed he'll be making an appearance in the game.

"The feeling of being there ... of walking the streets of the future is really going to be breathtaking," said Reeves.

A fan in the crowd then interrupted Reeves' speech, shouting: "You're breathtaking!"

The audience — and even Reeves himself — couldn't help but chuckle.

XBOX DEODORANT AND BODY WASH LET YOU SMELL LIKE A GAMER

"Best part of #XboxE3 for me," one Twitter user posted, sharing a 20-second clip of the exchange. The video has been viewed by more than 1.3 million people and garnered nearly 35,000 retweets as of late Monday morning.

"Humanity peaked here," one user replied to the viral tweet.

"Yeah, that was very cool," another agreed.

"Cyberpunk can't get me any more hyped. *introduces Keanu Reeves. - I was wrong," a third joked.

The man who made the "breathtaking" remark was later identified as well-known YouTuber, Peter Sark, according to Eurogamer.

"Keanu Reeves just announced to the world that I’m breathtaking," Sark wrote in a tweet, which has been shared nearly 10,000 times.

Sark admitted he was surprised by the internet's massive response to his one-liner.

"Never had so many notifications go off on my phone. Thanks for all the love from everyone around the world. You’re all breathtaking. Keanu confirmed it. Goodnight!" he later tweeted.

Reeves closed the show by announcing the game's release date and sharing a trailer for the show.