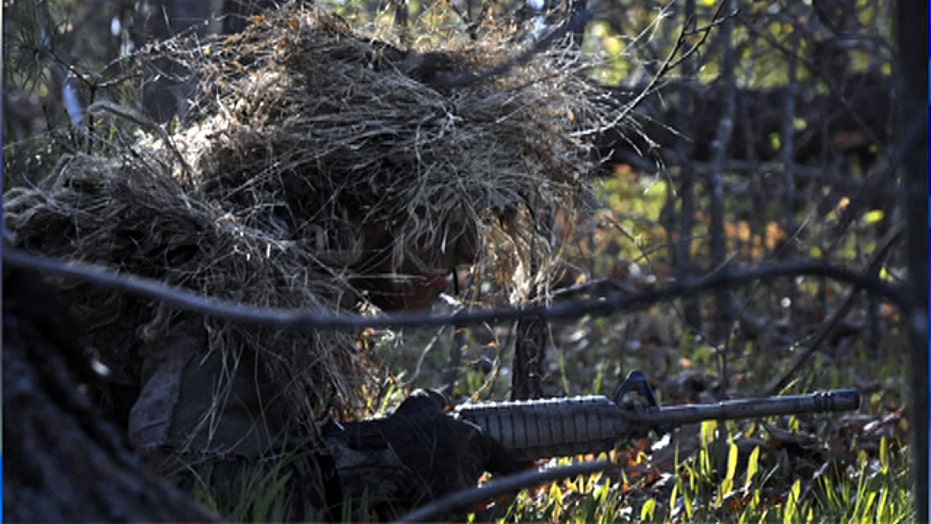 From Halloween Preppers to Doomsday Preppers, invisibility kits have been flying off the shelves. So how about a kit to detect and defeat those in stealth mode?

OpticsPlanet, purveyor of a range of popular invisibility kits, believes "the greatest challenge for an invisible man is facing his equal -- an opponent equipped in the latest stealth camouflage." What’s the company's solution to this challenge? An Invisible Man Hunting Kit jammed with military style tactical gear goodies -- and available to civilians.

Spot an invisible man
Any self-respecting approach to camouflage will use something like a sniper’s ghillie to blend into the background. So how can you spot someone who is decked out head to toe in order to disappear into the terrain?

Powerful binoculars will help you detect these "invisible" men. This kit includes a robust water- and fog-proof Nikon 8x20mm Premier LX Binoculars with excellent brightness, clarity and high resolution. A small yet effective binocular, it's lightweight at 9.5 ounces and fits in a pocket so you can easily take it everywhere.

Find a heat signature
If you suspect there may be an invisible man in your area -- someone so well concealed that you can’t spot him with your binoculars -- then it's time to go thermal. ATN's Odin Compact Thermal Monocular will locate that invisible man’s heat signature and reveal his position.

Compact and lightweight at 12.5 ounces, this device is made with high-grade polymers to provide capabilities identical in size, weight and shape to those used by the military. The Odin Compact Thermal Monocular uses a patent-pending "variable pivot technology" so the user can rotate the screen to match the imager’s angle.

One of the smallest thermal imagers available to civilians, it can be hand-held or mounted on a weapon, helmet or camera. It has a battery life of about 2 hours and, when used in a hands-free mode, allows you to “blast away the darkness,” OpticsPlanet says.

Erase your heat signature
What if your opponent is also armed with a thermal imager?

While there are very few options available to civilians, this kit includes one very smart practical one – a shovel. With its easy to use push-button slide, the portable Gerber Gorge Folding Shovel can be rapidly unleashed to dig deep and cover yourself with dirt. While this won’t work in all terrains and temperatures, in some cases it will prevent a thermal imager from detecting you.

The collapsible shovel has a glass-filled nylon handle with a rubberized overgrip and its robust blade works on pretty much anything including snow. The folding spade also has a hammer mode handy for defending yourself.

Bring in the waggler
If you’re not inclined to bury yourself in dirt to avoid detection, then you might want to deploy some of the other toys. The Cass Creek Waggler Predator Decoy is a distraction stand-out in this Invisible Hunter Kit.

It has a number of options for decoy and distraction: For starters, this “rock” has a tail.

The tail wags back and forth to draw attention and get both animals and humans distracted into pondering and investigating its source. But this decoy doesn’t just wag a tail, it can also deploy game scents and sounds to encourage those in the area to believe the tail belongs to an animal and not just a fake rock.

“You'll probably find more sounds than you need, though few humans can resist the allure of watching a coyote food fight,” the company notes. While the tail distract the eyes of those hunting an invisible man, the sounds will cover up your evasive movements or your approach.

Using a wireless one-handed remote control, all the scents, game calls and tail wagging can be controlled from up to 100 yards. For the hunter, the Cass Creek Waggler Decoy also provides an “all-in one solution” for attracting game. It has several sound options ranging from a coyote food fight, female coyote howl and beta-male coyote through to fox pups and cottontail distress.

Its MAST (that’s multiple animal scene technology) allows you to play two animal sounds at the same time and it has a high-grade speaker boosted by an amplifier that cuts through wind.

All this decoy commotion is contained in one “rock” with a carry handle so that you can easily tote it around -- should you need to scare out an invisible man.