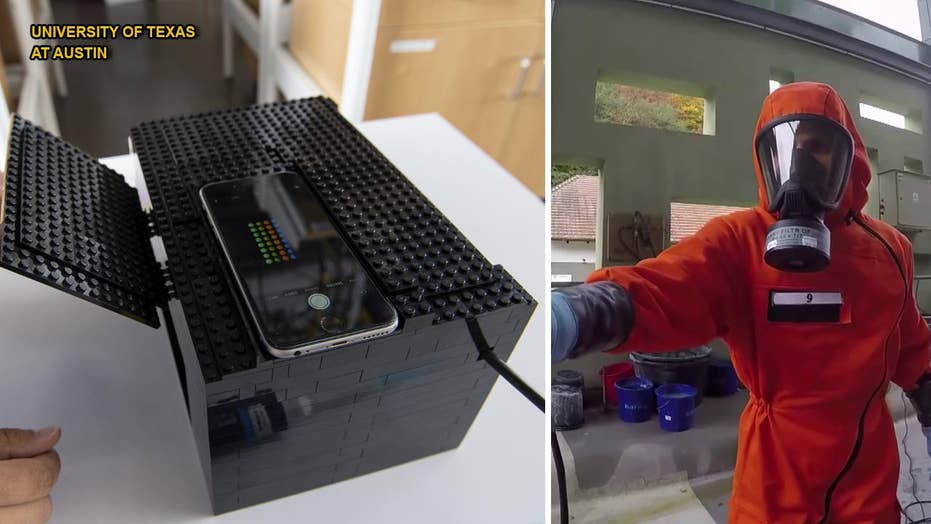 Diabolical, invisible weapons lurking to strike innocent civilians can now be exposed and stopped with an ingenious device built from Legos, a smartphone and free software.

University of Texas at Austin researchers have devised a simple way to hunt difficult-to-find deadly nerve agent weapons by using two items found in most American homes. Legos and a smartphone are two of the key components to this ingenious MacGyver-worthy device.

If need be, first responders could theoretically construct their own detection devices on the fly using this breakthrough.

Chemical weapons are very dangerous. To save lives, time is of the essence.

Typically, you will not be able to spot the weapon whether it is airborne or on the surface of an object. Chemical weapons tend to be invisible, odorless and tasteless.

Take the recent incidents in the U.K. involving the Russian nerve agent dubbed Novichok. Authorities have been searching for the source for months after two Russian nationals first came into contact with the nerve and became gravely ill. Now months later, it is believed two British nationals came in contact with this horrible substance and one of them has already died.

Once the source of attack is located, you need to know the type of agent as rapidly as possible. Nerve agent weapons can viciously ravage the body very quickly so every moment matters.

Identification speed is crucial to correctly treat victims and give them the best chance of survival and recovery. This speed is also vital for decontamination so that first responders can prevent further victims.

There are many known chemical weapons– and probably many unknown agents that have been developed in secret by foreign countries. One approach will not work for them all. Treatment and decontamination must be tailored and match the agent … making rapid identification critical.

The key components to this new method of detection are an ordinary smartphone, some special software downloaded onto the phone, a box made from Lego bricks, ultraviolet light, a standard 96-well test plate– and a special sauce, so to speak.

Why Legos? To get a good reading on the camera, a box to constrict light is necessary. Pedro Metola, a clinical assistant professor at UT Austin, came up with the idea of using Legos. They’re readily available, lightweight and relatively inexpensive compared to alternatives like 3D printers.

Here on U.S. home soil, hefty price tags on detection devices impact the ability of local law enforcement to have an arsenal ready for widespread distribution in an emergency. These devices can be very expensive and not something many police departments could afford.

PODCAST: WHAT DOES VENOM FROM ONE OF THE MOST POISONOUS SNAKES TASTE LIKE? FIND OUT FROM THIS FASCINATING NAVY SEAL

So how does it work?

Eric Anslyn, a chemistry professor at UT Austin, has created remarkable chemical compounds that neutralize nerve agents – and expose the hidden danger. This makes the otherwise invisible nerve agents glow so they can be seen by the naked eye.

Each nerve agent yields a slightly different color and brightness thanks to amazing fluorescence generating chemical sensors.  First responders can use this to reveal which nerve agent is being used in an attack, detect where it is located and identify how much has been deployed.

However, these variations can’t be distinguished by the naked eye – that’s where the smartphone camera comes in.

A smartphone camera is sensitive enough to detect the differences in color and brightness in the glowing reaction.

After the smartphone has taken a photo of the “glowing,” object, specially developed software analyzes color and brightness. It then provides the first responder with the type of the nerve agent and its concentration.

Within minutes, it can detect and identify different nerve agents.

Imagine this scenario. What if a terrorist unleashed a nerve agent in New York City subway cars, buses and taxis. If a nerve agent is engineered to linger, then the scale the attack would be staggering. The weapon could continue its attack beyond the first day and could theoretically be dangerous and lethal for months.

Nerve agent side effects will vary depending on factors like the type of agent used and the method of contact. If someone inhales a nerve agent, then the victim will most likely die almost instantly. If you touch a bus handrail that has been contaminated, then this small exposure to the skin may seem like nothing – and yet horrid delayed side effects may begin to develop.

Even a small drop on the skin of nerve agents like sarin can cause sweating and muscle twitching at point of contact. Larger exposure can lead to loss of consciousness, convulsions, paralysis and respiratory failure. It can be fatal.

Antidotes must be provided quickly for the best chance at recovery.

PODCAST: HEAR ABOUT A SHOCKING ATTACK ON THIS ARMY RANGER’S VEHICLE + GO INSIDE MORE OF HIS UNFORGETTABLE STORIES FROM DOWNRANGE

Chemical weapon attacks have been confirmed in Syria. But an attack of this kind may seem unthinkable outside of war zones. The current unfolding incident in the U.K. suggests otherwise. The allegedly Russian-launched nerve agent attack seems to have stayed active and lethal for months.

Europol also recently confirmed that extremist terrorist groups such as ISIS have been making efforts to acquire chemical weapons.

In the hypothetical New York City attack, if the sources couldn’t be tracked down quickly and neutralized, the consequences would be wide reaching. Residents, for example, would be terrified to touch anything. It would make folks scared to live, work or visit the city.  An attack like this could empty a city of inhabitants – and for how long? Even after decontamination, folks would be reluctant to return.

When first responders enter the potential attack region searching for the weapon and source of attack, it is no easy task. Retracing the victim’s steps, they could have vast areas to cover. Search efforts would be hindered by limited detection devices due to the hefty price tags.