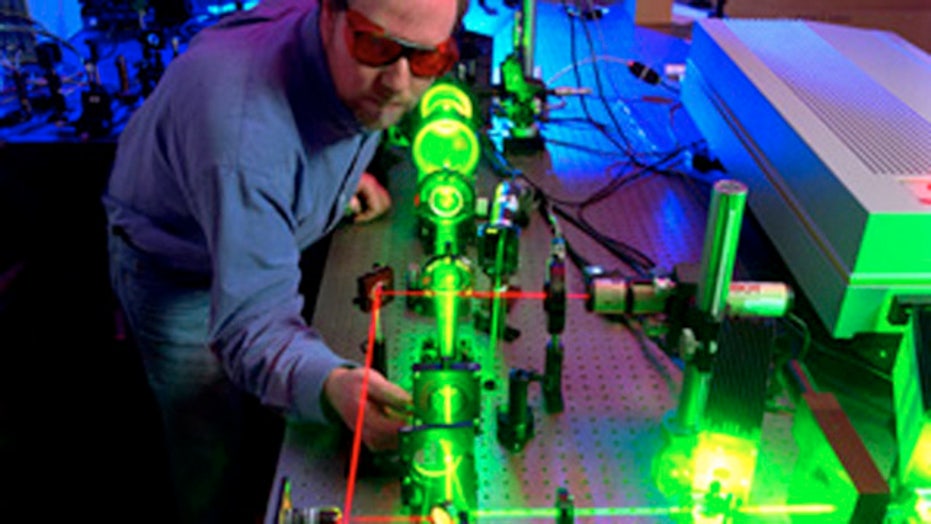 For almost two decades, the U.S. Army Research Laboratory has been developing materials to protect ground vehicles and dismounted soldiers from lasers, notably new material that would let natural light through but block any laser light.

Today’s lasers can disorient and even wound soldiers, inflicting permanent blindness, and they can easily blind crucial defense cameras. Picture an armored vehicle travelling through an urban environment: With limited vision, the soldiers in it would rely on the vehicle’s cameras as eyes on the surrounding streets.

“Lasers of varying pulse width and wavelength are being developed every day,” Mott said. “We develop protection for electronic sensors of the future as well as the sighting systems of today."

To keep those eyes protected -- both human and electronic -- the Army set about developing new approaches to eye protection.

For more than seven years, the lab has been collaborating with a number of other partner organizations that fall under the U.S. Army Material Command. Their motto says it all: “If a soldier shoots it, drives it, flies it, wears it, eats it or communicates with it, AMC provides it.”

To upgrade tanks and other Army ground vehicles with the new laser protection, the ARL has been working with the U.S. Army Tank Automotive Research Development and Engineering Center (TARDEC).

TARDEC also works with the Communications-Electronics Research, Development and Engineering Center's Night Vision Laboratory for their expertise in sensors. CEDEC specializes in seeing targets day or night on the battlefield.

Up next? The project will have some pivotal outdoor field tests against Army vehicles enhanced with ARL’s laser shielding materials.

From laser-proof sunglasses through to laser-shielded tanks, the potential applications for materials that can defeat lasers is great. With the rise of lasers for war, advances in countering them become more and more important.

Tricorders to defeat hidden explosives
On the same day that ARL announced its advancements, the Naval Research Laboratory announced a very different emerging tech, one that paves the way for battlefield “tricorders” that could defeat an all too common threat.

Improvised explosive devices, or IEDs, continue to be popular with adversaries and pose an ongoing risk to both civilians and service members alike.

Finding these hidden homemade explosives before they detonate is a priority.

Bomb-sniffing dogs and laboratory-grade equipment are two current methods to detect explosive trace chemicals, but the U.S. Naval Research Laboratory scientists are working on a new approach, using nanotechnology instead.

Their nano solution would be less expensive and could be operated by just about anyone instead of needing a trained professional that these current methods require.

Extremely difficult to detect, IED trace chemicals can be easily masked by commonplace compounds like diesel exhaust or even women’s perfume. The new Sin VAPOR sensor, or Silicon Nanowires in a Vertical Array with a Porous Electrode, has potential not just for the battlespace, but also for deployment to high-risk areas on the homeland from airports through to stadiums.

Sin-VAPOR works by detecting staggeringly tiny amounts of chemicals used in the explosives.

Even in its early development, their tech has already demonstrated it can detect in the parts-per-billion and even parts-per-trillion range

Such super high levels of sensitivity is critical for effective IED detection.

The NRL says it is different to other technologies in this detection space because it utilizes a 3D architecture to maximize the surface area and sensing capability.

Their tech uses silicon to fabricate the sensor so they are hoping to leverage semiconductor industry silicon expertise to achieve the necessary selectivity in their sensors.

The small, lightweight sensor will be portable and require low power.

Ultimately, their goal is to produce a field-deployable small cell phone sized "[that] would be akin to the Star Trek tricorder," explains Dr. Field.

If achieved, it would mean that every soldier could have in his or her hands the ability to detect a hidden IED.

Technology like SiN-VAPOR has the potential to be the foundation for a “tricorder” that could detect other chemical traces of  a wide range of threats, for example alerting soldiers to the sarin gas type attacks alleged in Syria.