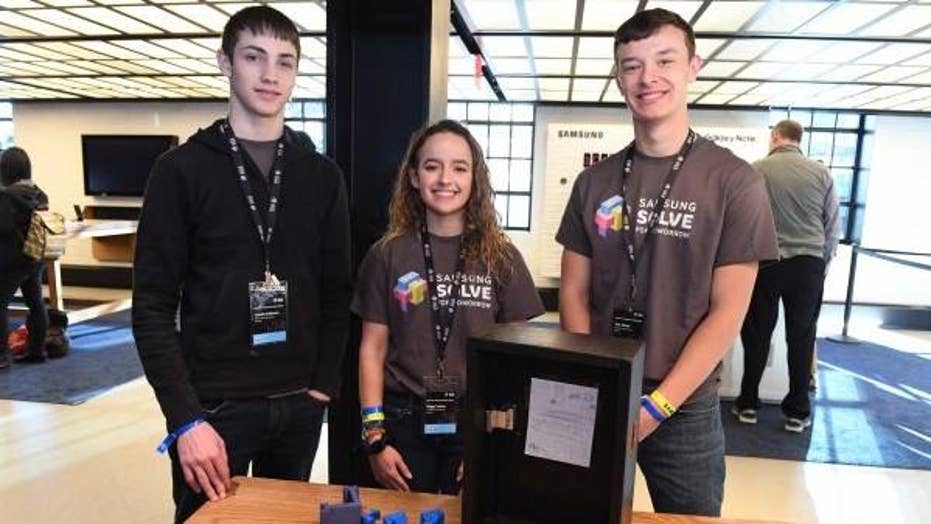 Students were tasked to invent new products as part of Samsung’s Solve for Tomorrow Contest, which awards a total of $2 million to encourage innovation with science, tech, engineering and math.

What if there was a way to impede an active shooter?

One example: With the quick flip of a metal door lock, students could stay safer than ever before. The bracket fits in a door jam and a metal pin slides into place.

Or this idea: With a press of a button, teachers could cause doors to lock and lower a protective shade over a classroom window. If a shooter can’t break into a room and can’t see anyone hiding in a room, he or she might keep moving.

Both of those inventions are the brainchild of high school teenagers. They were tasked to invent new products as part of Samsung’s Solve for Tomorrow Contest, which awards a total of $2 million to encourage innovation with science, tech, engineering and math.

Paige Tayloe is a senior at Owensville High School in Missouri. It was her light bulb moment that led to the Intruder Safety Lock, designed by a three-person team.

“What our lock does, it puts the students and teachers in more control of their safety when there is an intruder, giving them extra time and a few precious moments so they can escape the room or find somewhere safer to hide,” she says, speaking to Fox News.

For the Electromagnetic Smart Lock, sophomore Kiana Wilcher designed the product with her team at Richland Two Institute of Innovation high school in South Carolina.

“Without a visible target, the shooter may not want to enter the classroom,” says Wilcher, who explained to Fox News that her team went through a few iterations, one that tended to wrap the curtain around the wires. (They solved that by using different tubes for the curtain.)

“Schools use an open floor plan for collaboration, but we want students to live cautiously not fearfully,” adds teacher Kirstin Bullington, an adviser for the Richland project.

Although they used an off-the-shelf product for the wireless connectivity (a teacher can press a remote button to lock the door and release the curtain), they plan to build their own soon.

Tayloe says the biggest lesson she learned is that you have to know why a product should even exist. According to the local police department that advised the Owensville students, active shooters go through a process to observe, orient, decide, and act. Her team decided on the door lock as a way to slow down or thwart the shooter into reconsidering an action.

“It’s hard to know what you don’t know,” she says.

Yet, by analyzing all of the variables, her team devised a low-cost product that is simple and effective -- so effective that the local school district is evaluating it for all schools.

That said, according to Titania Jordan from child safety company Bark, schools need to conduct a comprehensive safety program and the best deterrent against school shootings is to identify and rehabilitate those most likely to become a shooter, although any new product helps.

“Adding technology and engineering products are very important, and collectively with other aspects of school safety in place, can stop this situation before it happens,” says Jordan.

For this group of high schoolers, innovative ideas are a step in the right direction.