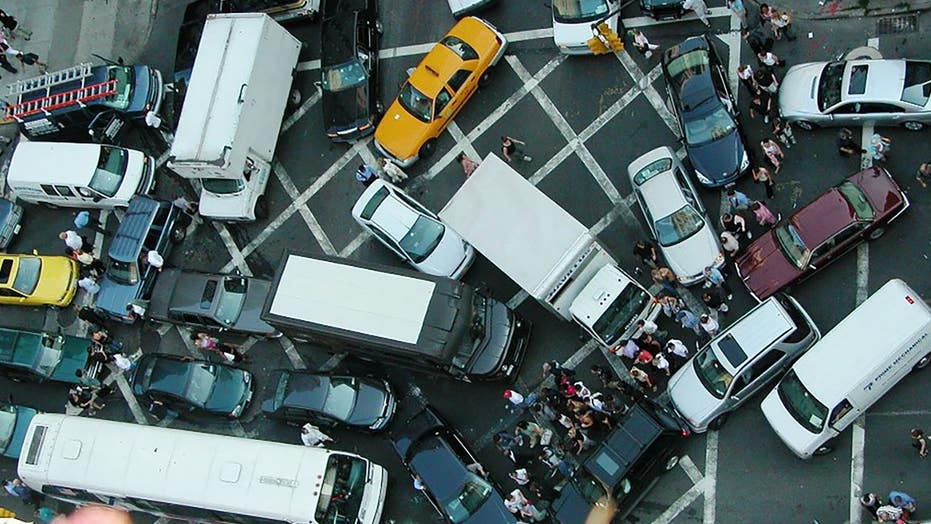 Imagine a future in which you're riding along in a self-driving vehicle and, suddenly, it shuts down in the middle of a major New York City intersection.

When you open the window to see what's happening, it seems that every other self-driving vehicle nearby has also shut down — grinding traffic to a halt citywide.

Although that scenario sounds far-fetched now, in a new study physicists at the Georgia Institute of Technology and Multiscale Systems, Inc. have simulated what it would take for hackers to wreak this kind of havoc in a future, even more connected world.

The study found that even randomly stalling just 20 percent of cars during rush hour would grind all traffic to a halt in a place like Manhattan.

However, other cities that don't have Manhattan's famous grid layout would likely be hit even harder by this type of hack.

Could hackers wreak havoc with connected cars? (Rgoogin at the English Wikipedia)

“Manhattan has a nice grid, and that makes traffic more efficient. Looking at cities without large grids like Atlanta, Boston, or Los Angeles, and we think hackers could do worse harm because a grid makes you more robust with redundancies to get to the same places down many different routes,” Peter Yunker, who co-led the study and is an assistant professor in Georgia Tech's School of Physics, said in a press release.

Most of the discussion around self-driving cars and security revolves around hacks that could crash one car or cause a car to hit a pedestrian. The researchers want to change the narrative.

“Unlike most of the data breaches we hear about, hacked cars have physical consequences,” Yunker added.

The Waymo driverless car is displayed during a Google event in San Francisco. (AP Photo/Eric Risberg)

Although the researchers are not cybersecurity experts, they hope their work prompts experts and public officials to consider the implications of connected cars and how such an attack could be stopped or made less likely.

The researchers' results were published in the journal Physical Review E.