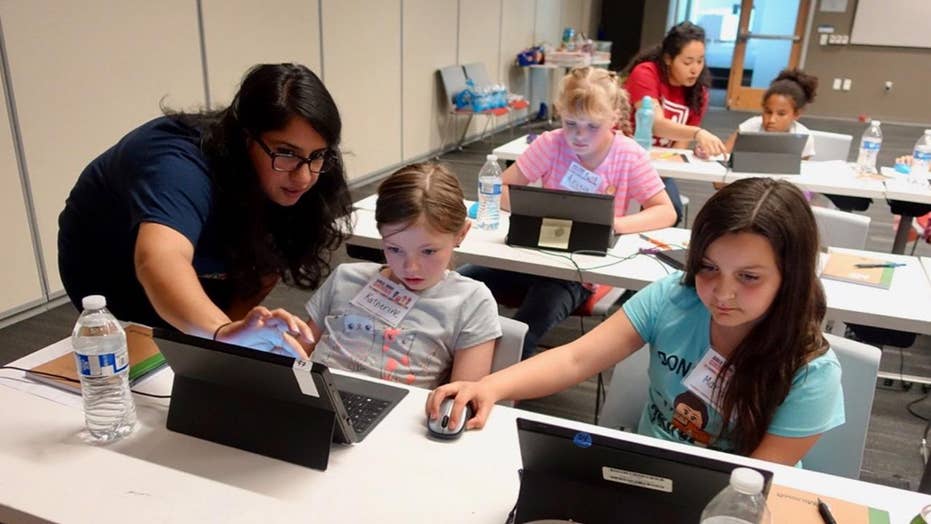 After growing up in the strict United Arab Emirates, Laila Shabir pushed past the confines of her society to create ‘Girls Make Games,’ a camp that teaches young girls to code and create their own video games. Her mission is to change the perception of gaming as a ‘boys only’ activity.

Two young boys planted in front of the TV for hours at a time in a 100 versus 100 battle royale shoot ‘em up. This is something that comes to mind when people think of gamers and the gaming community.

But, according to Laila Shabir, gaming is not, and should not be, just for boys.

Shabir, an immigrant from a small town in the United Arab Emirates, has created a program that is giving a new opportunity to young girls interested in entering the gaming world.  Growing up in an oppressive society Shabir found solace in the escape that video games afforded her.

“I really enjoyed sneaking out of my house with my sister and going to the arcade. Playing ‘Tekken,’ ‘Street Fighter,’” she said, recalling her earliest experiences with video games.

In the UAE, Shabir was forced to adhere to a rigid social structure.

“The list of things that I couldn’t do, or shouldn’t do, was much longer than the things that I was allowed to do,” she told Fox News. “So there was a lot of conflict inside me, because at home my parents were constantly telling me that I should dream big, and shoot for the stars. And they put all these incredible role models in front of me like Margaret Thatcher and Benazir Bhutto and I was supposed to be like them. But the minute I stepped out of my home, I was told the exact opposite. That I was dreaming too big, that if I wouldn’t stop looking at the sky I would stumble and fall on my face.”

Thanks to encouragement from her parents, Shabir would eventually move to America and attend college at M.I.T. where she met her husband and her interest in video games would be piqued yet again. In fact, it was her husband who showed her the true power of video games as a medium to affect social change.

“We quit our jobs and moved all the way to California to start an educational game studio,” she said. “And when I started going to conventions and having these conversations, the general idea that emerged was girls don’t play as many games as boys do. And I was really upset by that.”

This revelation did not sit well with Shabir.  Rather than sit by and accept what she was being told, she took this as an opportunity to start an experimental summer camp to meet girls who do play video games.  This experimental camp became the very first ‘Girls Make Games’ summer camp.

“It’s like teaching someone how to paint,” Shabir said. “You know once you teach them how to paint they can express themselves through that medium.  That’s exactly what we’re doing at camp.”

According to the camp’s website, Girls Make Games is, “a series of international summer camps, workshops and game jams designed to inspire the next generation of designers, creators, and engineers. The GMG Fellowship Program provides participants an insider’s view of the industry, an opportunity to teach game development by mentoring kids, and access to unique networking and coaching opportunities.”

Shabir is also working with many of the top game developers including PlayStation and Xbox to take ‘Girls Make Games’ to the next level.

She feels once the girls’ games start to get published and they enter the gaming industry that it will open up a multitude of game topics and themes unseen in the gaming space. “That’s a time that I’m really looking forward to,” Shabir said. “And I definitely think it’s very close.”