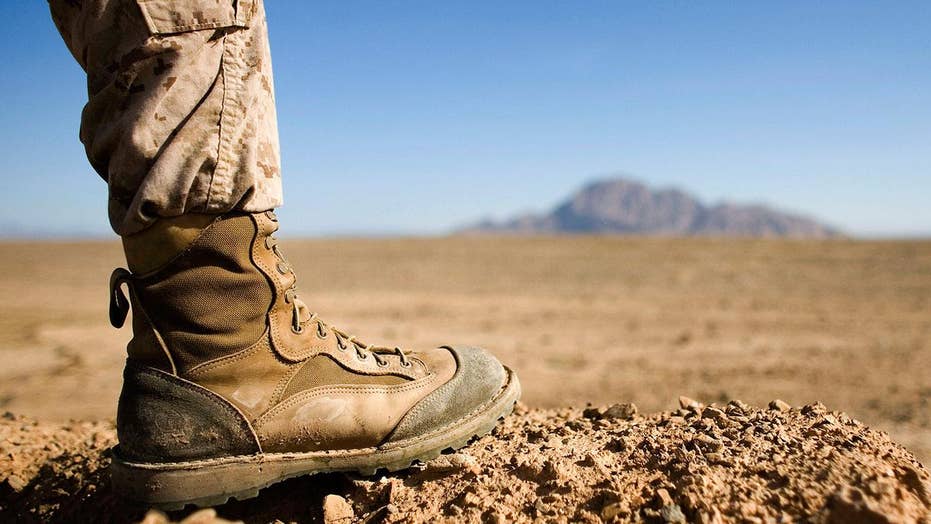 American combat boots: Did you know?

Did you know that there was no right or left foot for early combat boots? Learn this and other facts about the history of American combat boots

The phrase "an army marches on its stomach" has been attributed to both the Emperor Napoleon and Prussia's Frederick the Great – but regardless of who said it, many soldiers in the field would argue the importance of effective military boots.

The boots that soldiers have worn have improved dramatically over the past several hundred years.

The current Army Combat Boot (Temperate Weather) is used in conjunction with the Army Combat Uniform and it far more practical and a whole lot less "spit and polish" than the boots worn by Napoleon's or even Patton's troops. The ACB (TW) is a tan-colored, temperate weather boot that features moisture-resistant, rough-side-out cattlehide leather with a nylon duck cloth upper. This makes the boots both somewhat waterproof but still breathable, and unlike the old leather boots the polyether polyurethane midsole provides cushion. There is also a slip-resistant rubber outsole that soldiers of the past would have envied.

Before the American Civil War boots were far less comfortable – and many might be surprised to hear that the first true U.S. Army boot, the "Jefferson Boots" that were introduced in 1816, were laced up, ankle high without a specific right or left.

Tall leather riding boots were favored by American officers of means during and after World War I. (Photo: Peter Suciu)

"The soldiers were issued with two identical boots that could be worn on either foot," said Luther Hanson, curator of the U.S. Army Quartermaster Museum. "It was only after the Civil War that we started to see left and right boots, but the other thing was that there were only really four sizes and if your foot didn't fit you were left to pay someone to make you a boot."

Many officers, especially those with the means, did buy their own boots and the result was a variety in all lengths but generally without buckles as at the time that was seen to be the mark of an aristocrat. However, it has been said you could tell a man's worth almost by the height of his boots!

HISTORY OF THE 'JEEP' IN PICTURES

In the latter half of the 19th century the U.S. military boot evolved into a simple Service Shoe for both officers and enlisted men alike. These weren't true boots, and instead these low cut shoes were worn with puttees or webbing gaiters. These were updated in 1904 as the Russet Marching Shoe, but as the nations of Europe already discovered that these ankle high boots weren't exactly ideal for the mud-soaked trenches.

Short ankle high Service Shoes were still in use when America entered the Second World War. These boots were typically worn with the canvas gaiters, which offered some but not much support. (Photo: Peter Suciu)

As it happened American manufacturers were already making so-called Trench Boots for the French and Belgian military, and in January 1918 the Chief Quartermaster for the U.S. Army along with officers from the American Expeditionary Force HQ conceived a variation on the Trench Boot, which was dubbed the "Pershing Boot." Due to the boot's size these were called "Little Tanks" by the soldiers.

"These were taller, but also featured hobnails that provided more grip," Hanson told Fox News. "These were used alongside the Service Shoe, which also remained in use in the interwar period."

While produced in the millions the Trench Boots and Service Shoes alike from the World War I period are quite rare today because in many cases these were the best footwear many men of the time ever had.

While we often think of combat boots as being basic black, the U.S. military only switched from brown to black in 1957. These leather boots remained in use well into the 1990s, and even saw extensive use at the start of America's role in Vietnam. (Photo: Peter Suciu)

"In collecting the material culture of all nations in World War I for the National World War I Museum and Memorial, some commonplace objects are hard to come by and that includes soldiers' shoes and boots," Doran Cart, senior curator at the National World War I Museum and Memorial in Kansas City, told Fox News. "In the United States and other countries with the cessation of hostilities, the veterans were allowed to wear their boots home and for many returning soldiers and sailors the military-issue boots were their only footwear and consequently they were worn for years after."

It wasn't until the Second World War that American military planners updated the boots again. At the start of the war soldiers went back into the field with Service Shoes and updated gaiters, but soon specialty boots were developed for the various types of conditions that the soldiers faced.

HISTORY OF REMOTE WEAPONS IN PICTURES

"The big evolution came in 1941 with the paratrooper boot, which evolved from the civilian smoke jumper boots of the pre-war era," Hanson told Fox News. "It provided the support in the ankles that paratroopers needed."

It wasn't the only boot that saw improvement during World War II, as the Service Shoe gave way to the "Boots, Combat Service" version that has been more commonly known as the "Double Buckle Boots." These were modified Service Shoes with a leather high-top cuff added, which closed using two buckles. This was an improvement over the gaiters or leggings that were worn by soldiers and provided greater stability. The boots were used throughout the Korean War when the brown leather boots gave way to the shined black combat boots in 1957.

All leather combat boots weren't practical for jungle use, which is why the military developed the Jungle Boots prior to World War II. As with other combat boots these were originally brown but later in black along with nylon canvas. These boots were used in Vietnam, Grenada and Panama. It wasn't uncommon to see American soldiers with Jungle Boots in the Gulf War in 1991 (Photo: Peter Suciu)

World War II also saw the widespread introduction of Jungle Boots, which had been tested in Panama prior to America's entry into the conflict. The design was based on the idea that no boot could actually keep water out, so instead these were designed to allow jungle water as well as perspiration drain from the boots to allow a wearer's feet to dry. These featured cotton duck uppers that were later replaced by nylon canvas.

HISTORY OF CAMOUFLAGE IN PICTURES

These boots were further refined during America's role in Vietnam, such as the addition of stainless steel plates to protect the wearer from punji stake traps.

"So-called 'Desert Boots' were used for the first time in the Gulf War," Hanson explained. "The U.S. Army had tested various boots for use in the desert but this was really the first experience with them."

Throughout the 1990s and into the 21st century various shoemakers entered the market and today soldiers can pick the boots that feel right and protect stability and comfort. This has resulted in the adoption of the Army Combat Boot (Temperate Weather), which is unique in that it isn't even one pattern fits all.

Today Army Regulation for boots, (AR) 670-1 calls for the footwear worn by soldiers to be 8 to 10 inches in height. The regulations specify that the boots be made of tan or coyote flesh out of cattle hide leather with a plain toe and sole matching the color of the upper, with rubber or polyether polyurethane outsole and all leather or leather and nonmesh fabric. Notable combat boot brands today include Nike, Oakley and Garmont.

"Dozens of companies produce boots that are compliant for the military in addition to what a soldier might be issued," Hanson told Fox News. "In addition the military can now issue all sizes up to 17.5 and we can make even bigger boots if necessary. It has come a long ways since the days of four sizes of matching shoes!"