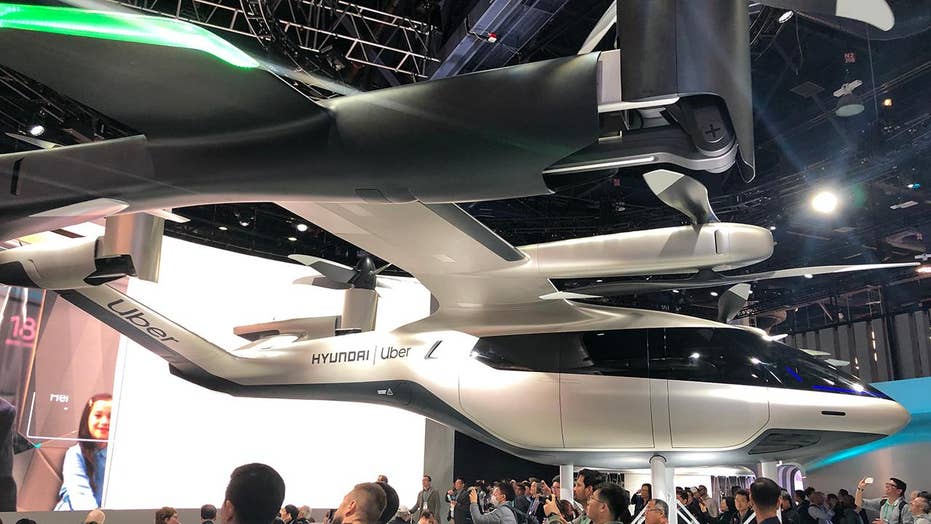 This week at the Consumer Electronics Show in Las Vegas Hyundai unveiled its full-scale concept Urban Mobility Vehicle dubbed the S-A1, which essentially looks like a souped-up helicopter that Uber Elevate will use for its flying taxi service.

LAS VEGAS - Traffic jams and flat tires might soon be a thing of the past, as Hyundai and Uber Elevate are teaming up to offer a new way to travel.

“Flying is exciting and being able to push a button and get to fly, It is a vision that a lot of folks have had for a long time,” Wyatt Smith, head of business development of Uber Elevate told Fox News.

This week at the Consumer Electronics Show in Las Vegas Hyundai unveiled its full-scale concept Urban Mobility Vehicle dubbed the S-A1, which essentially looks like a souped-up helicopter that Uber will use for its flying taxi service.

“This is a game-changer for the aerospace industry because historically production rates have been fairly low in aviation. When you bring the capabilities of an automaker to this sector, it creates an opportunity for scale as it relates to the production and that can make sure that technology gets in the hands of more people around the world,” Smtih said.

Uber Air would work similarly to how Uber operates now – with a push of a button a car would pick you up and take you to a Skyport where an Urban Air Mobility (UAM) vehicle is waiting to fly you to the next hub most proximate to your destination. The passenger will then hop in another car that will take them the rest of the way.

The S-A1 would just be one component of the urban air mobility ecosystem connecting the whole network together to allow passengers to get from point A to B.

While this might all sound farfetched and lightyears away, both Hyundai and Uber expect the next form of consumer transportation to hit the market within the next decade.

CES: HERE ARE THE GADGETS YOU WILL BE USING IN 2020

“It will take a few years to build momentum to be able to get on a path for type certifying these vehicles. And, obviously different makers are going to operate different timescales. We're really excited about the scale they'll [Hyundai] be able to bring to the ecosystem and to the industry,” Smith told Fox News. “We think over the next decade these vehicles will be flying on Uber Air.”

Hyundai told a group of reporters at the unveiling at CES the automaker expects to hit production in 2028 but acknowledged the regulatory challenges that lie ahead.

“Over time, and I cannot predict when but over time the industry regulatory agencies, not just U.S., but Europe as well and elsewhere, working together to open this market,  I am very optimistic it will happen,”  Dr. Jaiwon Shin, executive vice president and head of Hyundai's newly-established Urban Air Mobility Division told reporters, adding that the Federal Aviation Administration is committed to opening this drone and UAM market, saying “they’re working real hard.”

Uber already offers helicopter flights in New York City and will expand its network in 2023 to include Dallas, Texas and Los Angeles, as well as Melbourne, Australia for commercial operations.

The goal is to switch over to the Urban Air Mobility (UAM) vehicles provided by Hyundai in the late 2020s, assuming all the regulatory hurdles have been cleared.

“I think it is practical and I think this is the future of transportation, but it’s a long game,” Adam Ismail, editor covering car technology for Tom’s Guide, told Fox News. “Basically, we’ve done as much as we can with the roads – cities are established, it’s hard to change those traffic patterns. So, the skies are the next way people can move around more freely."

But Hyundai and Uber aren’t the only players staking their claim in the air taxi game.

Helicopter manufacturer Bell double-downed from last year’s air taxi concept, by unveiling a sleeker version called the Nexus 4EX ,along with a smart city ecosystem to connect all the technology, according to Wired.

Smith said the air taxi service will cost about as much as an Uber Black to start but eventually will drop to prices similar to that of an Uber X.

“The way we can do that is because unlike helicopters, these vehicles have much lower direct operating costs,” Uber Elevate's Smith told Fox News. “And so we can spread those lower, direct operating costs across more people -- just like you take Uber on the ground, we’ll offer you an Uber air ride that's also shared.”

And while It might sound too much like the Jetsons, Ismail told Fox News it’s possible, it’s just a question of when it will actually happen.

“The thing about Uber is that they have the, as they said, they have the demand and they are working with partners like Hyundai to really figure this out,” he said. “So it's going to take some time. But through the two companies working together, theoretically, they should be able to arrive at that goal.”