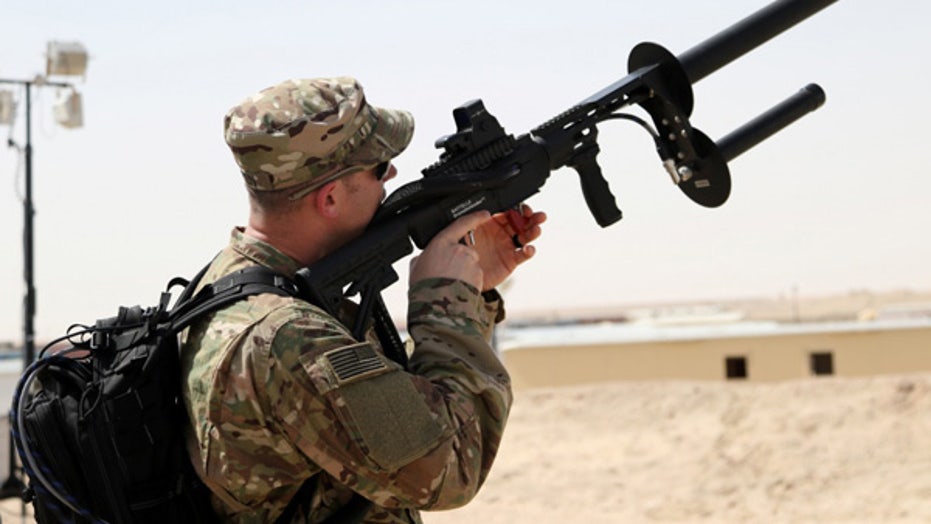 The U.S. Army’s Rapid Equipping Force is fast-tracking new technology to war that can track, jam and destroy attacking enemy drones as a way to respond to an explosive amount of new combat threats,

The systems, called “Drone Busters,” use Electronic Warfare (EW) to interfere with the GPS signal or Command and Control technology of enemy drones, disabling them or throwing them off course.

“We are assisting currently deployed and front line forces to disrupt and deter drone operations on a much larger scale,” Col. Joe Bookard, Director of the Army’s Rapid Equipping Force, told Warrior in an interview.

“Typically with a remote control item, it emits and transmits a signal. We can interfere with the control system of a device using a bunch of radio frequencies to source and disrupt,” Bookard said.

Quadcopters, fixed-wing drones and other unmanned aerial systems have been exploding onto the international market, making it easier for enemies to either equip them with cameras or even turn them into weapons themselves, packed with explosives.

The REF is supporting an Operational Needs Statement from the warzone, specifying a need to quickly respond to drone attacks. The REF usually finds and harnesses Commercial-off-the-Shelf technology to, unlike the traditional acquisition process, fast-track combat-ready systems to the front line to meet an immediate or pressing need.

As a so-called “non-kinetic” solution, EW weapons bring a number of advantages; they can reduce excessive destruction or collateral damage and also, in some cases, help disguise the location from which the counterattack is coming.

Part of the REF’s unmanned systems approach also includes acquiring and deploying mini nano-drones for forward surveillance missions. These, among other things, keep soldiers alive as they can get “eyes” in a building or over a hill without having to place soldiers in harm’s way.

“At one point you would use a soldier to clear a room, now we can launch drones to take a look into a room,” Bookard explained.

The REF process is, by design, intended to be quick and easy; commanders in need of a particular combat-need work with the REF to draft what’s called a “10-liner” capabilities requirements document to lay the foundation for the delivery of a needed system.

While the REF is known for having delivered a wide range of technologies and weapons to Iraq and Afghanistan over the years of ground wars, the organization has been shifting its emphasis toward addressing great power competition. Major force threats are now just as pressing as terrorist or insurgent threats, creating a scenario requiring the REF to harness new sets of technologies. In recent years, the Army has shifted its focus from Central Command to Army Pacific and Army Europe.

“As we develop the Army of the future, there are some types of technology that will better assist our war efforts,” Bookard said.