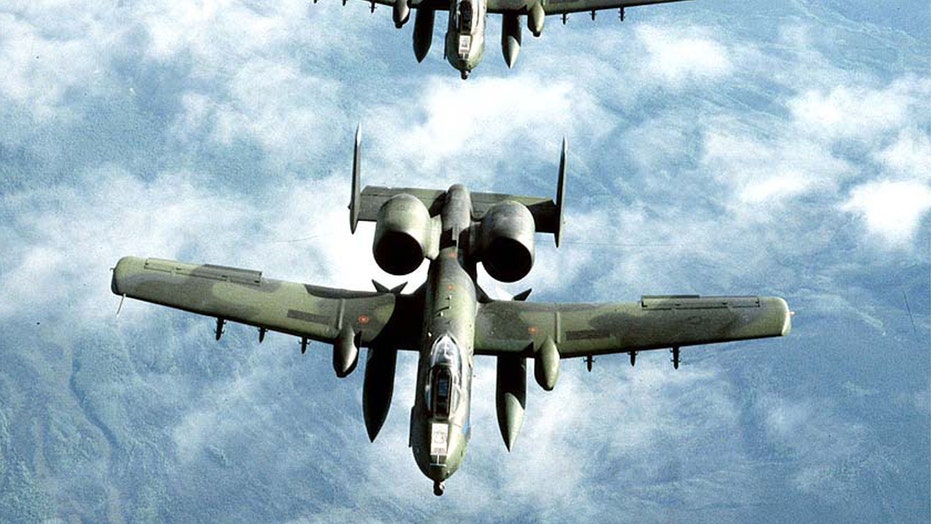 Known for an ability to keep flying after taking multiple rounds of enemy machine gun fire, land and operate in rugged terrain, destroy groups of enemy fighters with a 30mm cannon and unleash a wide arsenal of attack weapons, the A-10 is described by pilots as a “flying tank” in the sky -- able to hover over ground war and provide life-saving close air support in high-threat combat environments.

“It is built to withstand more damage than any other frame that I know of. It’s known for its ruggedness,” A-10 pilot Lt. Col. Ryan Haden, (former) 23rd Fighter Group Deputy, Moody AFB, told Warrior Maven in a previous interview in 2016.

The pilot of the A-10 is surrounded by multiple plates of titanium armor, designed to enable the aircraft to withstand small-arms fire and keep flying its attack missions.

“The A-10 is not agile, nimble, fast or quick,” Haden said. “It’s deliberate, measured, hefty, impactful calculated and sound. There’s nothing flimsy or fragile about the way it is constructed or about the way that it flies.”

A-10 Thunderbolt II, affectionately known as the Warthog, has been in service since the late 1970s and served as a close air support combat aircraft in conflicts such as the Gulf War, Operation Enduring Freedom, Operation Iraqi Freedom and Operation Allied Force in Kosovo, among others.

Having flown combat missions in the A-10, Haden explained how the aircraft is specially designed to survive enemy ground attacks.

“There are things built in for redundancy. If one hydraulic system fails, another one kicks in,” he said.

If the aircraft loses all of its electronics including its digital displays and targeting systems, the pilot of an A-10 can still fly, drop general purpose bombs and shoot the 30mm cannon, Haden explained.

“So when I lose all the computers and the calculations, the targeting pod and the heads up display, you can still point the aircraft using a degraded system at the target and shoot. We are actually trained for that,” he said.

Unlike other air platforms built for speed, maneuverability, air-to-air dogfighting and air-to-air weapons, the A-10 is specifically engineered around its gun, a 30mm cannon aligned directly beneath the fuselage. The gun is also called a GAU-8/A Gatling gun.

“The 30mm cannon has 7 barrels. They are centered the way the aircraft fires. The firing barrel goes right down the center line. You can point the aircraft and shoot at the ground. It is designed for air to ground attack,” Haden explained.

Haden explained the gun alignment as being straight along the fuselage line without an upward “cant” like many other aircraft have. Also, the windows in the A-10 are also wider to allow pilots a larger field of view with which to see and attack targets.

The engines of the A-10 are mounted high so that the aircraft can land in austere environments such as rugged, dirty or sandy terrain, Haden said. The engines on the A-10 are General Electric TF34-GE-100 turbofans.

“I’ve seen this airplane land on a desert strip with the main gear buried in a foot of sand. On most planes, this would have ripped the gear up, but the A-10 turned right around and took off,” he added.

There have been many instances where A-10 engines were shot up and the pilots did not know until they returned from a mission, Haden said.

These aerodynamic configurations and engine technology allow the A-10 to fly slower and lower, in closer proximity to ground forces and enemy targets.

“The wings are straight and broadened. The engines are turbofan. They were selected and designed for their efficiency, not because of an enormous thrust. We have a very efficient engine that allows me to loiter with a much more efficient gas-burn rate,” Haden said.

By virtue of being able to fly at slower speeds, the A-10 can fly beneath the weather at altitudes of 100 feet. This gives pilots and ability to see enemy targets with the naked eye, giving them the ability to drop bombs, fire rockets and open fire with the 30mm cannon in close proximity to friendly forces.

“We shoot really close to people. We do it 50-meters away from people. I can sometimes see hands and people waving. If I get close enough and low enough I can see the difference between good guys and bad guys and shoot,” Haden explained.

The aircraft’s bombs, rockets and cannon attack enemies up close or from miles away, depending on the target and slant range of the aircraft, Haden added.

“We deliver the munitions by actually going from a base position – then pointing the jet at the ground and then pulling the trigger once we reach the desired range,” he explained.

The A-10 uses both “Lightning” and “Sniper” pods engineered with infrared and electro-optical sensors able to find targets for the pilot.

“The aircraft uses the same targeting pod as F-15E and F-16. However, most of the fighters can’t transition between the two targeting pods and we can, based on our software,” Haden said.

The cockpit is engineered with what is called the CASS cockpit, for Common Avionics Architecture System, which includes moving digital map displays and various screens showing pertinent information such as altitude, elevation, surrounding terrain and target data.

A-10 pilots also wear a high-tech helmet which enables them to look at targeting video on a helmet display.

SUBMARINE SURGE: WHY THE NAVY PLANS 32 NEW ATTACK SUBS BY 2034

“I can project my targeting pod video into my eye so I can see the field of view. If something shoots at me I can target it simply by looking at it,” he explained.

During the early months of combat in Operation Enduring Freedom, in a battle known as “Operation Anaconda,” Haden’s A-10 wound up in a fast-moving, dynamic combat circumstance wherein U.S. military were attacking Taliban fighters in the Afghan mountains.

During the mission in March of 2002, Haden was able to see and destroy Taliban anti-aircraft artillery, guns and troop positions.