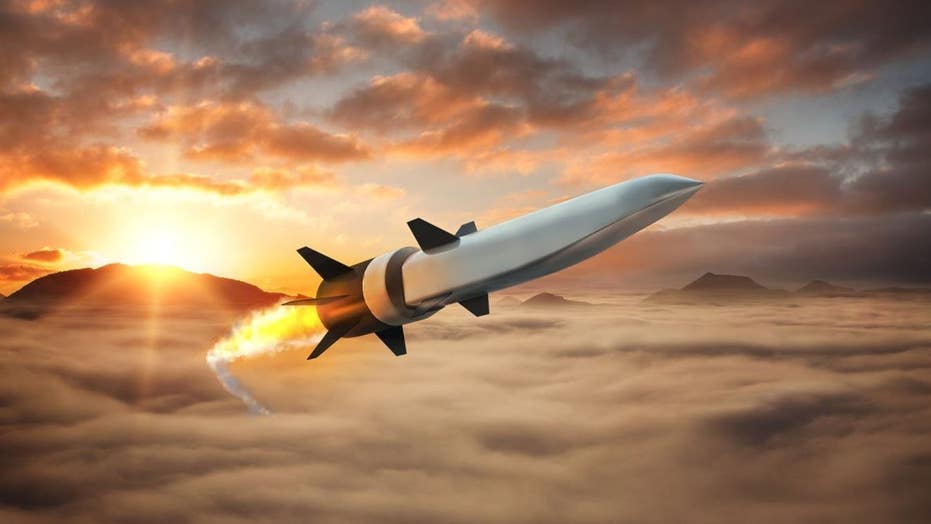 The Air Force arming its classic B-1B bomber with long-range, lethal hypersonic weapons able to move at 5-times the speed of sound, skip along the boundaries of the earth’s atmosphere and descend upon targets at lightning speed -- before an enemy might have a chance to respond, or even know what’s on the way.

During a recent “mock up” of a B-1B weapons bay, Air Force weapons developers showed that the platform can carry as many as four hypersonic weapons internally.

“In a demo I saw recently, the bulkhead moves as its designed...when you take a CRL(Conventional Rotary Launcher) as its designed. The mock up they had was one of the larger hypersonic weapons. It will be able to carry four or more hypersonic weapons internally. You can see the merit of that,” Gen. Timothy Ray, Commander, Air Force Global Strike Command, told reporters at the Air Force Association conference.

Speaking broadly about the services’ plans for a future bomber fleet, Ray said the service will need to sustain its current fleet of bombers, such as the B-1, B-52 and B-2, until the new B-21 Raider arrives in sufficient numbers. The timing of what constitutes “sufficient” numbers may still be a subject of evaluation among Air Force planners, however the service does say it plans for at least 100 B-21s. Given this evolving timetable, Ray explained his hope regarding some weapons specifics for the current fleet.

“My preference would be that all of them have external hard points open for some carriage and an extended bomb-bay. The external hard points can carry the smaller hypersonics along with JASSM (Joint Air to Surface Standoff Missile, JASSM ER(extended range) and LRASM(Long Range Anti-Ship Missile). You can see a greater versatility for that aircraft configuration,” Ray said.

The demo showed that the B1-Bs magazine capacity can be increased from 24 weapons internally, all the way up to 40, Lt. Col. Dominic Ross, B-1B program element monitor, AFGSC, (Air Force Global Strike Command) said in an Air Force Report.

“This gets the B-1 into the larger weapons, the 5,000 pounders. It gets it into the hypersonics game as well,” Ross said in the report.

Accommodating larger hypersonic weapons into a B1 bomb-bay brings a number of strategic implications; not only does it massively increase the target envelope and range but also allows for longer mission “dwell” time over targets to sustain attacks. The timing of the demos is significant as well, given that it serves two key Air Force aims -- accelerate hypersonic weapons to war and sustain and upgrade the B-1 to its maximum extent.

Integrating large hypersonics also integrates with the Air Force’s broader intent to more quickly merge innovations from the Science and Technology realm into operational use. A new S&T Air Force strategy, released earlier this year, emphasizes greater synergy between scientifically-oriented weapons breakthroughs and “bending” metal on prototypes and systems in preparation for operational combat use.

“The S&T strategy articulates five different areas of strategic capabilities to address as enduring military problems. One of those is speed and reach of disruption and lethality. One of the ways to address this is through hypersonics as a tool in the toolbox for operators,” Tim Sakulich, Executive Lead for Implementing the Air Force S&T Strategy, Air Force Research Lab, told Warrior in an interview.

“From a materials and manufacturing standpoint, we are contributing to the hypersonics capability base by looking at materials and processes that will enable designers to demonstrate these kind of future capabilities and make them affordable. This includes looking at composites and materials for thermal management,” Sakulich, who also serves as the Director of Materials and Manufacturing, Air Force Research Lab, told Warrior during the interview.

Interestly, in a manner consistent with Sakulich’s comments, a Raytheon essay on hypersonics cites “thermodynamics” or “heat”management as essential to the effort. Objects, such as weapons, traveling at hypersonic speeds naturally generate a massive amount of heat which must be properly managed for the weapon to function. Specific materials designed to withstand high temperatures need to be used as well, Raytheon data states. One of the greatest challenges with hypersonics is what the Raytheon paper refers to as the “effects chain” -- the command and control, networking and sensor technology sufficient to achieve the requisite guidance, targeting and precision flight.

‘We are interested boundary layer phenomenology to better understand and examine heat flux on hypersonic weapons that allows us to do optimization of the thermal management to provide that lethality and reach we are looking for,” Sakulich said.

Although the B1-B is a bomber with a large airframe, carrying four larger hypersonic weapons internally with an extendable bulkhead brings a significant advantage, Air Force officials said.

“The purpose of the demonstration was to show that we’re still able to move the bulkhead from the forward intermediate bay to the forward location; increasing the intermediate bay capacity from 180 inches to 269 inches, Ross said “Additionally, we demonstrated that we can still carry weapons externally on six of the eight hard points, which increases our overall carriage capacity.”

“We are flying a HAWC system…ground tests have already happened. The whole point is to simulate what you would experience in flight, so you can create the correct thermal environment. You can model and measure the heat in the vehicle and you can measure the material properties,” Dr. Thomas Bussing, Vice President, Raytheon Missile Systems, told Warrior in an interview earlier this year. “You can’t test range (with a ground test), but you can measure performance, lift of the vehicle and thrust, attributes from which you can infer range.”

Air-Breathing systems regularly use a scramjet engine to generate thrust -- and propel the air vehicle across long distances to a target. While engineered to reach previously unattainable levels of propulsion, scramjet engine technology aligns with the technical configuration of existing high-power engine systems. This includes taking in a high-speed air flow, compressing the air and then igniting it with gas or some kind of propellant to generate thrust.“

“Air breathing systems can be air or ground launched and have a rocket motor to accelerate to a cruise speed,” Bussing said.

Alongside air-breathing hypersonic weapons, the Pentagon is also developing “boost glide” weapons which achieve speed and range by “skipping off the upper atmosphere,” Bussing said. They can be a winged glider or take on a canonical shape, making them maneuverable and high-speed with a high “lift over drag ratio.”

Boost-glide hypersonic weapons, Bussing explained, “propel a glide vehicle to a point in space where it has a certain altitude and a certain forward speed.” The speed of descent then propels the weapon toward its target.

The TBG program will also be designed to integrate with the Navy’s ship-based Vertical Launch System, according to the report. DARPA also seeks to engineer a ground-launched hypersonic weapon able to “penetrate modern enemy air defenses,” the report - “Hypersonic Weapons: Background and Issues for Congress” -- states.

Many Hypersonic weapons are engineered as “kinetic energy” strike weapons, meaning they will not use explosives but rather rely upon sheer speed and the force of impact to destroy targets, developers explain. A super high-speed drone or ISR platform would better enable air vehicles to rapidly enter and exit enemy territory and send back relevant imagery without being detected by enemy radar or shot down.

Although potential defensive uses for hypersonic weapons, interceptors or vehicles are by no means beyond the realm of consideration, the principal effort at the moment is to engineer offensive weapons able to quickly destroy enemy targets at great distances. Air Force Scientists explain that speed of sound can vary, depending upon the altitude; at the ground level it is roughly 1,100 feet per second. Accordingly, if a weapon is engineered with 2,000 seconds worth of fuel – it can travel up to 2,000 miles to a target, former Air Force Chief Scientist Gregory Zacharias told Warrior, interestingly, in an interview several years ago.

Given the pace and urgency of hypersonic weapons development, Sakulich made a point to emphasize inter-service collaboration when it comes to research and development.

“All of the lab commanders meet on a regular basis to compare priorities and investments. D0D is sharing information across the laboratories. The Army is interested in hypersonics, the Navy…. all of us, so we are using these types of collaborative processes and mechanisms,” Sakulich said.

--- Kris Osborn of WARRIOR MAVEN (CLICK HERE) can be reached at krisosborn.ko@gmail.com