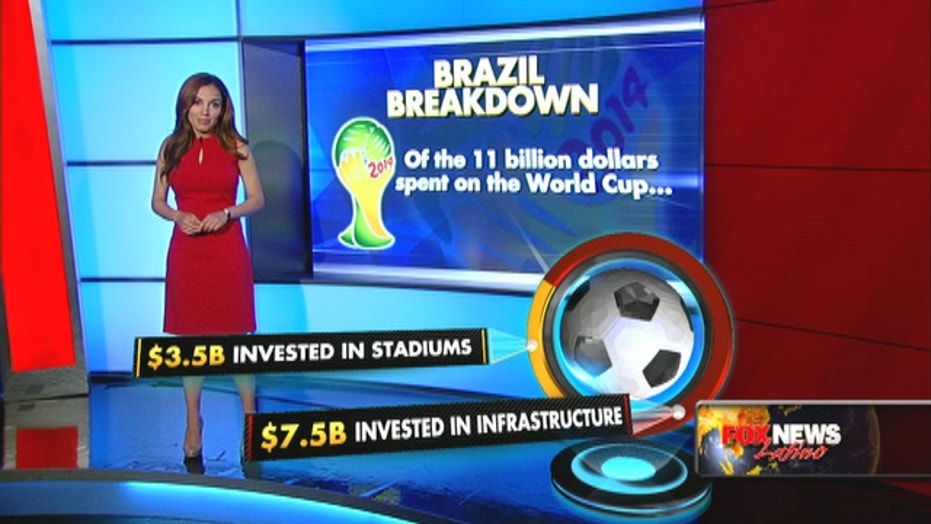 Brazil's World Cup is the most expensive ever

The Brazilian government estimates they will have spent at least $11 billion dollars to host 64 games for 32 of the best teams in the world from June 12th to July 13th.

The World Cup in Brazil is set to be the most expensive to date.

The Brazilian government estimates they will have spent at least $11 billion dollars to host 64 games for 32 of the best teams in the world from June 12th to July 13th. The estimate is about triple the amount spent by South Africa in 2010 ($4 billion) and seven times as much as Germany spent in 2006 ($1.6 billion).

Much of the cost discrepancy can be traced back to one word: infrastructure. Germany already had the infrastructure (trains, hotels and stadiums) to host hundreds of thousands of foreigners, and South Africa, while not as set as Germany, is a much smaller nation. Brazil is investing heavily in infrastructure as it plans to host the games in 12 cities – some of them thousands of miles apart.

Of the $11 billion, 32 percent or $3.5 billion has been invested in 12 World Cup stadiums. Six of the stadiums have been refurbished, another six are brand new, including the $900 million dollar Estadio Nacional in Brasilia which is the second most expensive soccer arena in the world. According to the Associated Press, the arena is now a poster child for those who criticize the Brazilian government for out-of-control spending and mismanagement, or even corruption.

Meanwhile, 68 percent of the money, or $7.5 billion has been invested into infrastructure projects like renovating airports, roads, and improving mass transit options. But many projects, like plans to build a monorail to connect the São Paulo, have been scrapped.

As for the fans, ticket prices to one of 64 of the matches are expensive, unless you are Brazilian.

FIFA has allocated 3 million tickets to fans worldwide. Tickets through FIFA for Brazilians start at just $15 and prices for international fans start at $90 for the group match games. Those international tickets however are reselling on third-party sites like StubHub for 5 times the amount.

A group match ticket is reselling for an average starting price of $553. Tickets for the opening match on June 12, between Brazil and Croatia, cost $275 dollars through FIFA  but on StubHub are going for $3,000. For the final match, tickets officially start at $440 but on StubHub tickets to see the championship game have a starting price of $6,000.