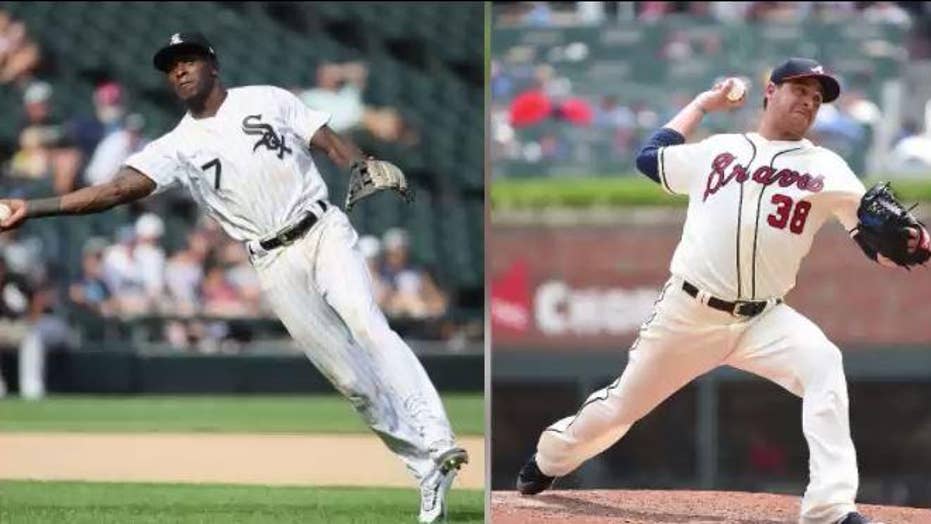 Elizabeth Swarzak, the wife of current Atlanta Braves and former Chicago White Sox relief pitcher Anthony Swarzak, and Bria Anderson, the wife of White Sox shortstop Tim Anderson argued about the recent mass shootings in Texas and Ohio, white nationalism and gun control. The private conversation was later leaked by a woman who is also an MLB player’s wife.

A private conversation between the wives of current Major League Baseball players in which they discussed the recent mass shootings in Texas and Ohio was leaked Tuesday, sparking outrage at some of the comments.

The conversation was between Elizabeth Swarzak, the wife of current Atlanta Braves and former Chicago White Sox relief pitcher Anthony Swarzak, and Bria Anderson, the wife of White Sox shortstop Tim Anderson. The two were going back and forth about the shootings, white nationalism and gun control.

Ariana Dubelko Giolito, the wife of White Sox pitcher Lucas Giolito, leaked the conversation onto Instagram. It was not immediately clear who sent her the screencaps. The pictures revealed Swarzak trying to point out the difference between “white nationalist” and “white supremacist,” discussing the root cause of the shootings and diving into Chicago crime.

“I’m disgusted at your apparent racism towards white people and your belief that only white people are committing these crimes,” Swarzak wrote to Anderson. “If I highlighted the black on black crime in Chicago and said it’s only the black folks killing each other in Chicago and the north side is fine!! I’d be so racist so your post is extremely irresponsible considering the actual crime committed by immigrants in this country. And the human and children trafficking.”

Anderson responded: “You are confused, and you need real facts.”

“I am so disgusted and disappointed,” she wrote. “Bria Anderson is a teacher with a Masters degree working on her doctorate while raising two girls and running a non profit organization that works with the youth of South Side Chicago. For someone within this baseball family to say such disgraceful and disgusting things, to shamelessly act in a demeaning and hateful way is reprehensible.”

She added: “Half of the players in the MLB are IMMIGRANTS from Latin countries. To know someone among you holds hate in their heart or thinks of you as a criminal because of your birthplace is something I cannot even imagine. Insulting and demeaning a woman’s incredible non-profit work is mind boggling. I’m angry and hurt for every person of color involved in this sport - the players, wives, front office staff, coaches, trainers, the fans who love this sport. And for the families of those who lost their lives at the hands of mass murderers who, in their own words, wanted to kill people of color.”

“Love to everyone for shining LIGHT ON ME! AN EDITED conversation doesn’t define ME,” she wrote. “I love all people and respect all walks of life. I simply will not idle by as these atrocities unfold and lives are lost. I want a BETTER LIFE FOR everyone, especially children prone to gun violence in major cities."

Swarzak added: “Apparently there’s some confusion about white nationalism. I think there’s nationalism which great to be proud of your country and there’s white supremacy which I completely oppose and believe there’s no superior race. But it’s irresponsible to use the word ‘white nationalism’ as it spreads a false narrative that it’s negative to be proud OF YOUR COUNTRY. Again, this was an edited POST!”

“It comes down to she felt that one of her closest friends on the team was disrespected and wanted to stand up for her, and I stand by her for that,” he said. “My wife’s got a pretty powerful voice and she likes to challenge people. She’s definitely challenged me over the last couple of years. That’s just who she is.”

Bria Anderson told the Chicago Sun-Times said she had no plans to “unfriend” Swarzak after the leaked conversation.

“My only hope was that the other person I had that conversation with would kind of acknowledge all sides of the spectrum of the story, as opposed to trying to change the narrative and focus in on the violence that’s obviously happening in the African American community,” she said. “That conversation was just kind of irrelevant, to be honest, to what we were discussing as far as the mass shootings.”