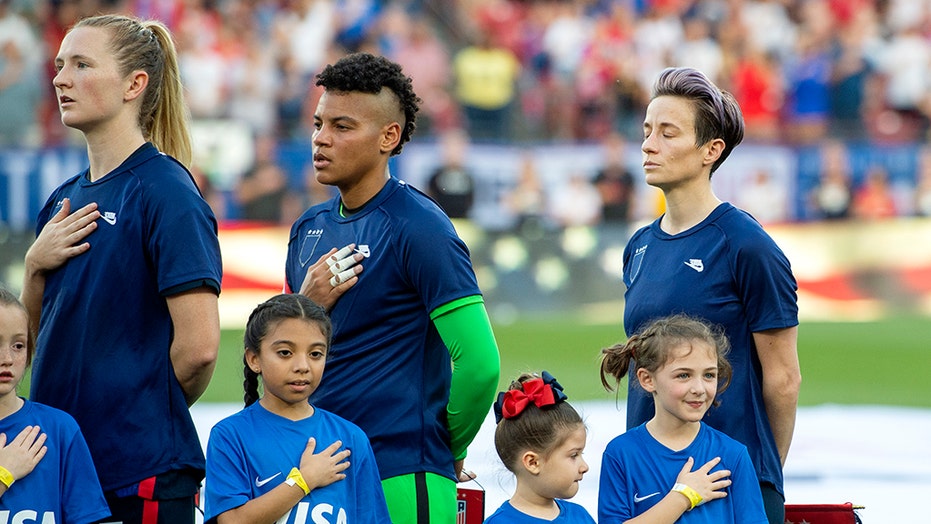 The United States women’s national soccer team on Monday called on the United States Soccer Federation to “immediately repeal” a 2017 policy that requires players to “stand respectfully” during the national anthem.

USWNT issued a joint statement from the players asking the federation to repeal the policy that was implemented after U.S. soccer star Megan Rapinoe knelt during the national anthem before her match against the Chicago Red Stars in 2016.

“We believe the Federation should immediately repeal the ‘Anthem Policy,’ publish a statement acknowledging the policy was wrong when it was adopted and issue an apology to out Black players and supporters,” the statement posted to Twitter read.

"Further, we believe the Federation should lay out its plans on how it will now support the message and movement that it tried to silence four years ago," the statement continued.

US SOCCER TO DISCUSS REPEALING BAN ON KNEELING DURING NATIONAL ANTHEM: REPORT

"Until USSF does so, the mere existence of the Policy will continue to perpetuate the misconceptions and fear that clouded the true meaning and significance of Colin Kaepernick, Megan Rapinoe and other athletes taking a knee—that Black people in America have not been and continue to not be afforded the same liberties and freedoms as white people and that police brutality and systemic racism exist in this country."

The policy, which was voted on in February 2017, states that "All persons representing a Federation national team shall stand respectfully during the playing of national anthems at any event in which the Federation is represented."

The Federation's board of directors is reportedly set to meet Tuesday to discuss the policy. A vote could come as early as Friday. However, for the decision to become permanent, the board will still have to pass a vote at the annual general meeting next year.