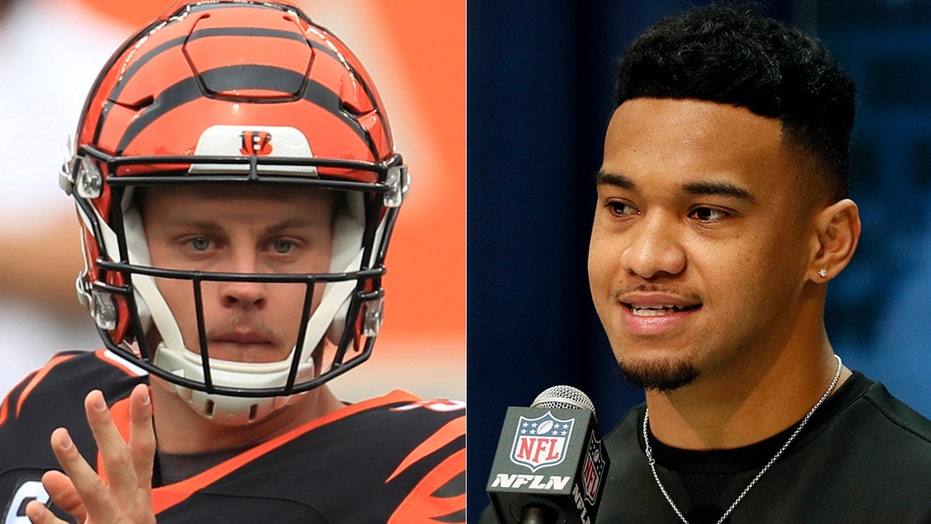 Trent Dilfer, a Super Bowl champion with the Baltimore Ravens, believes in letting rookie quarterbacks sit and learn behind a veteran for a year before taking control under center.

However, the former NFL quarterback acknowledges that there are arguments against his theory. Peyton Manning and Troy Aikman were two all-time greats who stepped in right away and produced, but the 2020 NFL season is certainly a unique one with the coronavirus pandemic affecting everything in its path. In this instance, Dilfer looks at the Patrick Mahomes and Alex Smith transition in Kansas City as the model teams should follow in the near future.

“Alex was a pro. He was a good quarterback, but he was the ultimate pro,” Dilfer, who is working with Panini America, told Fox News in a recent interview. “I was with him for two years, he’s a good dude, a good leader, a tough guy, a workaholic, and he’s a good dad and husband. For Patrick to see that for a year and see the gravity of the job because the job is not just throwing touchdowns. The job is huge. And for Patrick to see how he handled the job, I got to believe has allowed his career to be on fire at an early stage.”

Dilfer is a known supporter of Miami Dolphins first-round pick Tua Tagovailoa, and he believes that the former Alabama superstar quarterback has the opportunity to learn behind a veteran in Ryan Fitzpatrick before taking over in the near future.

“Ryan Fitzpatrick is grizzled and hardened by the league,” Dilfer said. “And Tua can learn so much from that. I’m really hoping Tua sits. But the other argument to that is what’s going on with Joe Burrow. Why can’t the regular season be the preseason? If you’re the Dolphins and the Bengals, why not give your quarterback some action? And I understand that, I really do. Because there’s no action like live-action. But personally, in my opinion, if I were to do it, I would sit them. At least until deep into the season.”

Through Week 2, both the Dolphins and Bengals have 0-2 records. Miami took consecutive losses to AFC East rivals New England and Buffalo. Against the Patriots in Week 1, Fitzpatrick threw three interceptions in a 21-11 loss, but played much better on Sunday in a 31-28 loss to the Bills.

The Bengals, on the other hand, lost a 16-13 heartbreaker to the Los Angeles Chargers in Week 1. Burrow threw for 193 yards in his NFL debut, but on a short week against the Cleveland Browns in Week 2, Burrow was asked to throw 61 times, but he answered the bell by throwing for 315 yards and three touchdowns with no interceptions in a 35-30 loss.

Dilfer believes both quarterbacks will be franchise changers for their teams. Burrow is getting his opportunity right now, but Tagovailoa’s chance should be arriving in the coming weeks. Dilfer predicts Tagovailoa should see the field sometime between Week 4 and Week 6.

“That’s typically the NFL way, depending on how many games the Dolphins are winning,” Dilfer said. “If the Dolphins are not winning, I would say somewhere in that range. That’s what owners want, that’s what the fan base wants, the pressure is so immense. If they are winning, I can see (head coach) Brian Flores playing the long game here. So, a lot of it depends on their record.

Dilfer added: “When he does play, because I do think it’s inevitable that he plays, I think you’re going to see a guy who makes some mistakes, tries to put the Super Man cape on too often, tries to be the hero too often because that’s his DNA, that’s his downfall. He tries to play every play like it’s the last play of his life. But I also think you’re going to see some explosive qualities that only a few guys in the league have. Tua, like Patrick Mahomes, like Aaron Rodgers, like some of the best guys, they have this intuitive feel for the game. You don’t know how they saw it, how they did it. But somehow they do it consistently. I think you’re going to see that from Tua when he plays. A lot of highs and a lot of lows would be my simple answer.”