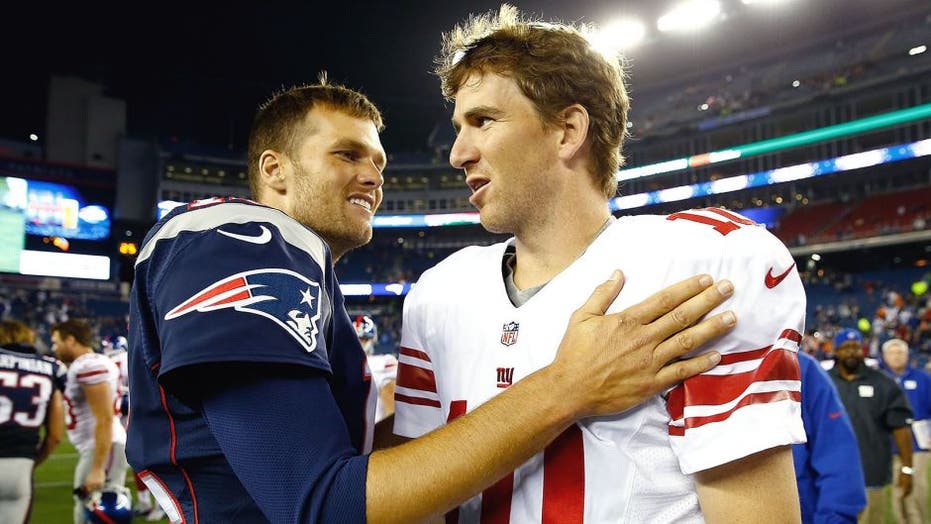 New England Patriots’ quarterback Tom Brady was among the many people congratulating Eli Manning on his retirement Friday -- but he didn’t miss the opportunity to remind the former New York Giant that his greatest accomplishments came at Brady’s expense.

Just before Manning was to announce his official retirement from the NFL at MetLife Stadium in East Rutherford, N.J., Brady tweeted out a lighthearted message praising his former competitor.

“Congratulations on your retirement, and a great career Eli! Not going to lie though, I wish you hadn’t won any Super Bowls,” he wrote.

Manning was told about Brady’s remarks during the press conference and said: “We joke about it, but it’s not really funny to him.”

The Giants bested Brady and the Patriots in Super Bowls XLII and XLVI, making Manning one of only five players to be named Super Bowl MVP twice.

Tom Brady #12 of the New England Patriots talks to Eli Manning #10 of the New York Giants following a preseason game at Gillette Stadium in 2013 in Foxboro, Mass. (Photo by Jared Wickerham/Getty Images)

Manning retired after a disappointing 4-12 season, playing only four regular-season games. But his career stats of 57,023 passing yards, 366 touchdown passes, and 4,895 completions are part of his legacy.

“This sport has very few real farewells, but as the clock wound down on our win against the [Miami] Dolphins this season, I ran through my favorite place in the stadium, the tunnel,” Manning said Friday.

“I waved to our loyal fans, and then Abby and my kids ran out to meet me. That was my farewell and a moment I’ll cherish forever," he added.