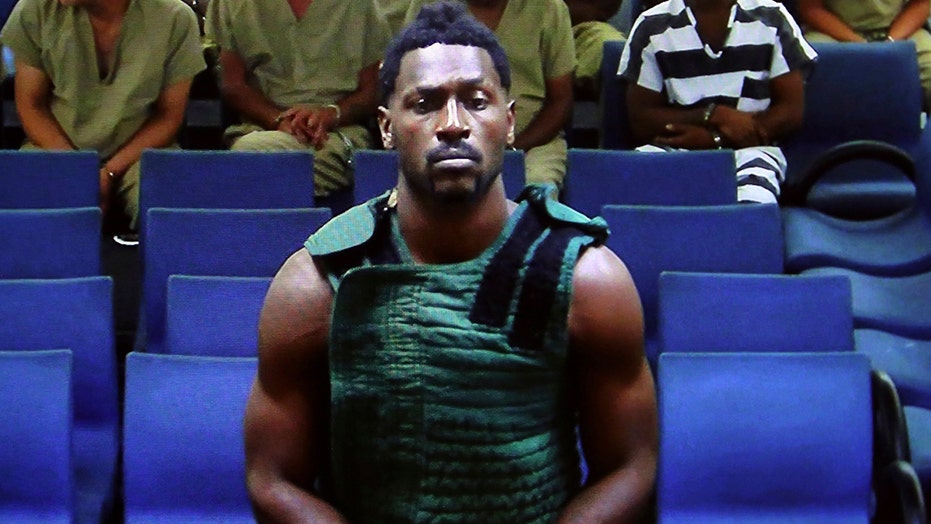 Antonio Brown was granted bail Friday morning after he spent the night in a Florida jail on charges that he and his trainer attacked a moving truck driver.

A Broward County judge set Brown’s bond at $110,000 on the condition that he wear a GPS monitor, surrender his passport and undergo a mental health evaluation. He also may not have any weapons or ammunition, and could have random drug tests.

An arrest warrant for the 31-year-old NFL wide receiver was issued by the Hollywood Police Department Wednesday on charges of burglary with battery, burglary of an unoccupied conveyance and criminal mischief.

NFL free agent Antonio Brown turned himself in at a Florida jail on Thursday night, following accusations that he and his trainer attacked the driver of a moving truck that carried some of his possessions from California. (Broward Sheriff's Office via AP)

Police responded to Brown’s home on Tuesday afternoon after a moving truck driver hired by Brown to bring some of his belongings from California alleged the free-agent and his trainer, Glenn Holt, attacked him over a money dispute.

According to a police arrest report, Brown refused to pay the driver $4,000 to release his household goods. The driver called police and reported that Brown threw a rock when he drove away, causing a small dent and chipping the paint.

The driver later returned when the manager of his company told him that Brown now owed $4,000, as well as an additional $860 for the damage and the driver’s time. Brown paid the $4,000, but refused to pay the rest, so the driver returned to the van to call his company, and that's when Brown “started another verbal argument,” police said.

“Brown stepped up into the cabin of the vehicle and started to physically grab and pull (the driver),” while Holt “entered the vehicle and grabbed the keys from the ignition,” police said. The driver tried to get the keys back and cut his hand in the process, according to the report.

Police said the driver also suffered injuries including scratches on his neck, shoulder and arm, and a scrape on his stomach.

Holt then used the keys to open the truck, while Brown “and other unidentified friends” began removing boxes. When the driver told them the boxes belonged to another client, Brown and the others "started tossing the items back into the truck causing damage to some of the property,” an officer wrote.

Brown turned himself in to police around 10 p.m. Thursday.

His attorneys claimed during Friday’s hearing that Brown was “overcharged” and they expected charges to change before his next appearance, ESPN reported.

Prosecutors sought no bail, pointing out that the wide receiver is a wealthy sports figure who is a flight risk. They noted that police had been called to his Florida home 18 times since December, for various reasons.

It was not immediately clear when Brown would be released.