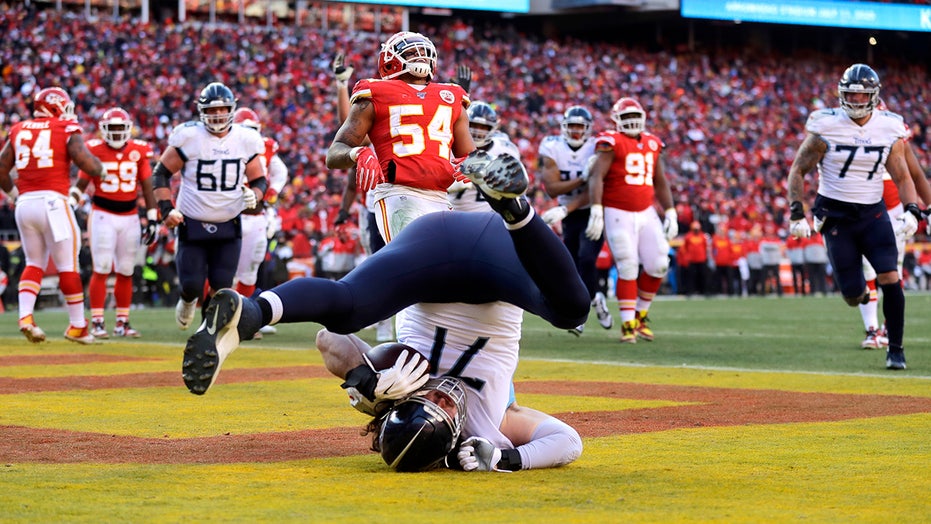 Tennessee Titans offensive lineman Dennis Kelly set a record in the AFC Championship game against the Kansas City Chiefs with his touchdown catch in the second quarter.

Ryan Tannehill threw a 1-yard touchdown pass to Kelly to give Tennessee a 16-7 lead early in the frame.

Kelly became the heaviest NFL player to catch a touchdown in the playoffs with the score, CBS broadcaster Jim Nantz announced during the game. Kelly is listed at 6-foot-8, 321 pounds.

The 30-year-old offensive tackle also had a touchdown catch in the regular season. He caught a pass from Tannehill against the Jacksonville Jaguars in Week 12.

Titans coach Mike Vrabel has been no stranger toward using different players to score touchdowns. Vrabel played linebacker for the New England Patriots and the Chiefs during his career. He caught 10 touchdown passes in the regular season and two in the playoffs.

Tennessee Titans' Dennis Kelly (71) celebrating his touchdown catch with quarterback Ryan Tannehill (17) during the first half of the NFL AFC Championship game against the Kansas City Chiefs on Sunday. (AP Photo/Charlie Riedel)

Vrabel picked a perfect time to throw a wrinkle in his playbook, which caught the Chiefs off-guard during the game.

Kelly was wide open for the score, caught the pass and fell backward.