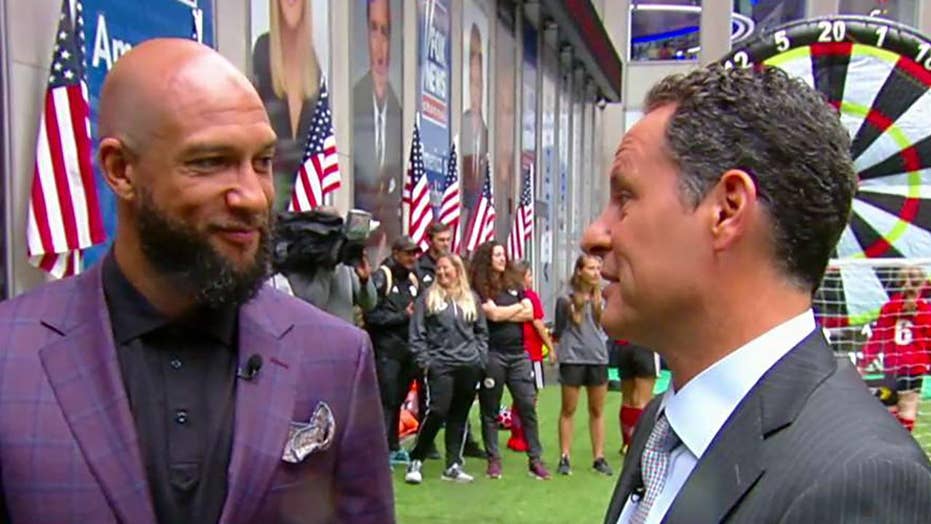 Former United States men's national soccer team goalie Tim Howard reflects on his career and what's next on 'Fox &amp; Friends' as the women's World Cup kicks off in France.

There is no doubt former U.S. men’s national team goalkeeper Tim Howard will be cheering on the U.S. women’s team while they defend their World Cup title in France beginning Tuesday.

Howard appeared on “Fox & Friends” and told host Brian Kilmeade there’s a big difference between playing for your country and playing for a club.

“It’s everyone’s dream,” Howard said. “It’s every soccer player’s dream to play for their country. Walk out, hear their national anthem and pull on that shirt. And so when you look at the girls … I’m so excited for them. I know what that’s going to feel like.

“I’ve been there and I’m jealous. I wish I was in France.

US player Megan Rapinoe, front right, stretches with Ali Krieger and other team members during a US women's soccer team training session at the Tottenham Hotspur training center in London (AP Photo/Kirsty Wigglesworth)

The U.S. team begins its World Cup title defense against Thailand. The team, led by Alex Morgan, Megan Rapinoe and Julie Ertz, is in a tough group that also features Sweden and Chile.

Howard said he has no doubt the U.S. will start off strong against Thailand.

“I think it would be good to get off to a flying start, put some goals into the back of the net. The first game is always jitters even though it’s Thailand,” he said. “They’ll be excited for it and I think they’ll win.”

Heather O’Reilly, a former U.S. team member who helped the team capture the trophy in 2015, also told Fox News she expects the U.S. to beat Thailand.

“It might be a good way to introduce yourself to the 2019 World Cup to get a couple of goals under your belt. Hopefully, the attacking players will feel free and the momentum and that confidence will carry them through the group,” she said.

The match will take place in Reims, France. It will be broadcast on Fox Sports, with coverage beginning at 2 p.m. ET.