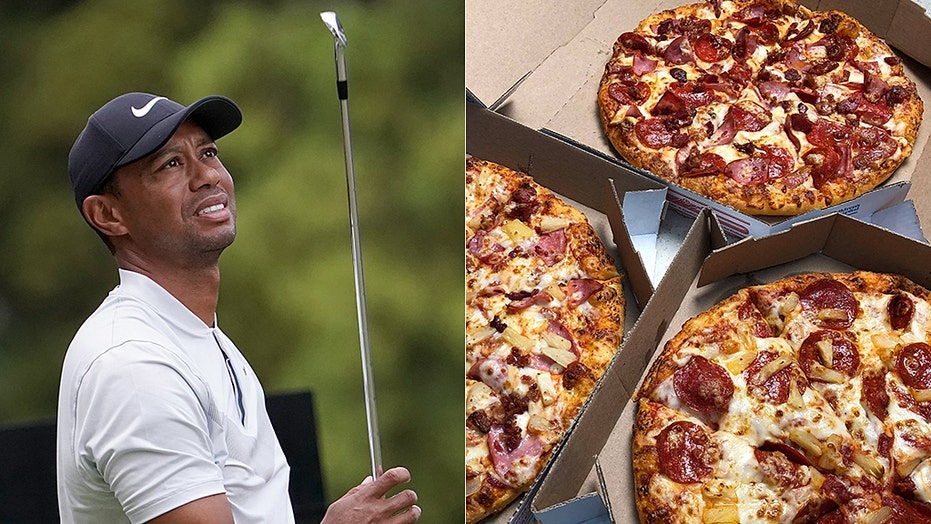 Tiger Woods and some of the world's biggest golfers had quite the adventure on Friday night when they were forced into a Domino's Pizza joint in Japan after powerful storms made roads undrivable.

Woods was supposed to play the second round at the Zozo Championship in Accordia Gold Narashino Country Club when a massive rainstorm stopped all possible play. To pass the time, he and a group of other supers - including Justin Thomas, Jordan Spieth, Gary Woodland, Bubba Watson, and Ryan Palmer - went to see an afternoon showing of the "Joker."

However, once the movie ended the group could not leave the theater.

WOODS SHOOTS 64 AND TIED FOR LEAD IN JAPAN

Tiger Woods and some of golf's biggest stars ended up being stuck at Dominos Pizza in Japan for about 90 minutes on Friday after powerful storms made roads undrivable at numerous areas in Chiba. (Tiger Woods Dominos AP)

The courtesy vans that were supposed to take them back to their hotel were not able to make it because of the roads and no Uber or taxis were available, according to USA Today. Public transportation was also shut down in Chiba.

Spotting a Domino's nearby, the group ducked inside and chowed down on six thin-crust pies - standing at the table-less eatery to eat as heavy rains poured down outside the restaurant.

Jordan Spieth of the United States watches his tee shot on the 12th hole during the second round of the Zozo Championship PGA Tour at the Accordia Golf Narashino country club in Inzai, east of Tokyo, Japan, Saturday, Oct. 26, 2019. (AP Photo/Lee Jin-man)

Woods, and his girlfriend, Erica Herman eventually decided to walk across the street to a 7-Eleven where two fans asked him for a selfie, USA Today reported.

The downtime and pizza seemed to sit well with Woods, who shot a second straight 6-under 64 on Saturday to take a two-stroke lead over Woodland after the second round concluded.

Woods discussed his plan for Sunday where he expects to play for up to 10 hours.

Tiger Woods of the United States watches his tee shot on the 5th hole during the second round of the Zozo Championship PGA Tour at the Accordia Golf Narashino country club in Inzai, east of Tokyo, Japan, Saturday, Oct. 26, 2019. (AP Photo/Lee Jin-man)

Thomas tweeted about the Domino's experience, saying, "What a day for the books...Walked to dominoes with the guys, made our way home 2 hours later, treatment again, now back in my hotel room."