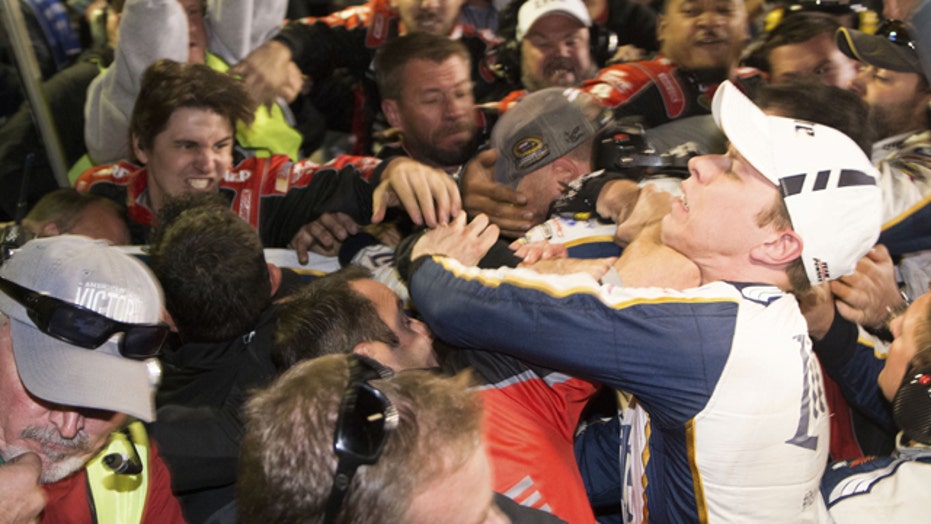 Drivers duke it out following race in Texas

FORT WORTH, Texas – Brad Keselowski is doing everything he can for a chance at another NASCAR championship. No matter how angry he makes other drivers.

Jeff Gordon was fighting mad at Texas, leading to a post-race confrontation with Keselowski and a big melee. Gordon's shot at a huge playoff victory got wiped out after hard contact during extra laps Sunday.

"It's his disregard for what's going on out there," said Gordon, the four-time champion who in an earlier live postrace television interview used an expletive in referring to Keselowski. "He made an over-aggressive move. Those are moves you find if you've got a slamming, banging race. He cut my left rear tire. That was it for me. It's a real shame."

After spinning out, losing a lap in the pits and finishing 29th, Gordon became the second competitor in four races during the Chase for the Sprint Cup championship to confront 2012 champ Keselowski after the checkered flag.

Fireworks exploded in the sky, and on pit road, while Gordon teammate Jimmie Johnson celebrated his third consecutive victory in the Texas fall race.

Gordon was leading on a restart on Lap 335, one more than the race's scheduled length, when he took the outside line. When the No. 24 car drifted up a bit, Keselowski pushed through the gap before the contact.

"By the time it closed up, I was committed, and I stayed in it. That almost won me the race," said an unapologetic Keselowski, who finished third.

"I'm doing everything I can to win this championship, racing at 100 percent. That's something I'm not going to be ashamed for."

At Charlotte Motor Speedway last month, it was Matt Kenseth who lost his cool and attacked Keselowski.

Gordon stopped his car right by Keselowski after the Texas race, and there were plenty of punches thrown. NASCAR officials were in the middle of crew members and others around Keselowski's No. 2 car.

It seemed the only contact among drivers was when Kevin Harvick shoved Keselowski into the fracas, and Gordon briefly appeared to grab hold of Keselowski's firesuit.

"I just turned him around and told him to go fight his own fight," Harvick said.

Keselowski's face was puffy, and he took a couple quick drinks of water to wash the blood from his mouth. Gordon was left with a cut on his lip.

"I couldn't even tell you what happened," said Keselowski, who confirmed he was hit by someone. "Just a melee of people."

All the punches thrown appeared to come from crew members — including a member of Gordon teammate Kasey Kahne's team who appeared to land several shots on Keselowski from behind.

NASCAR will review the brawl and penalties could be issued during the week. Keselowski was fined $50,000 for his behavior at Charlotte, but Kenseth escaped penalty because he did not throw any punches when he jumped Keselowski from behind.

Robin Pemberton, NASCAR senior vice president of competition and racing development, indicated he had no problem with the hard racing in Texas. He might have a different take on what happened after the race.

"Everybody gets together, and when you're holding on to each other and grabbing and this, that and the other, it's one thing," Pemberton said. "When punches are landed, that's a different scenario."

Some things that happened at Texas that maybe got overlooked because of the post-race brawl:

OINTS MATTER: Because both races in the third round of the Chase have been won by drivers already eliminated from contention, at least three of the drivers in the final four at Homestead will be determined by points.

The eight Chase contenders going to Phoenix next week are separated by only 18 points.

Joey Logano and Denny Hamlin both have 4,072 points, two more than Ryan Newman. Gordon dropped from first to fourth after the Texas rumble, a point ahead of Kenseth and Carl Edwards. Keselowski and Harvick round out the contenders.

4 FOR 70: Johnson became the first driver to win four Cup races at Texas, and got his 70th career victory. Johnson led nine times, keeping the No. 48 Hendrick Motorsports Chevrolet in front for 191 of the 341 laps.

"To win 70 Cup races is mind-blowing to me," Johnson said. "Very proud to have all my races with one race team with one sponsor."

The six-time Cup champion was eliminated from Chase contention in the second, three-race round.

Johnson was 1.6 seconds behind teammate Gordon when Clint Bowyer had an accident on the frontstretch on the 331st of 334 scheduled laps.

"Jeff just got a really good start the restart before and got control of the race," Johnson said.

Busch was already a lap down and running 22nd when part of his tire came apart on lap 205. He got up into the top 10 after a final series of cautions.

"We were a bag of everything today. Man, we were so bad," Busch said. "We fought all day long. ... The guys got me a good car there at the end in order to battle back and come back for a fourth."

Busch won the Nationwide and Camping World Truck Series races at Texas in 2009, but ran out of fuel with 2 1/2 laps left in the Cup race when he was leading. He did complete an unprecedented tripleheader sweep at Bristol in 2010.

YELLOW SUNDAY: After only one caution in the first 175 laps, a stretch which included 129 consecutive green-flag laps, the yellow flag flew 12 times in the last 166 laps.

The 13 total cautions were the most ever at Texas, which hosted its 28th Cup race.

There were seven yellow flags in the final 55 laps.